As the 2020 presidential race heats up, Dr Christopher Raymond explores the phenomenon of cheering for the other party’s outsider candidates. 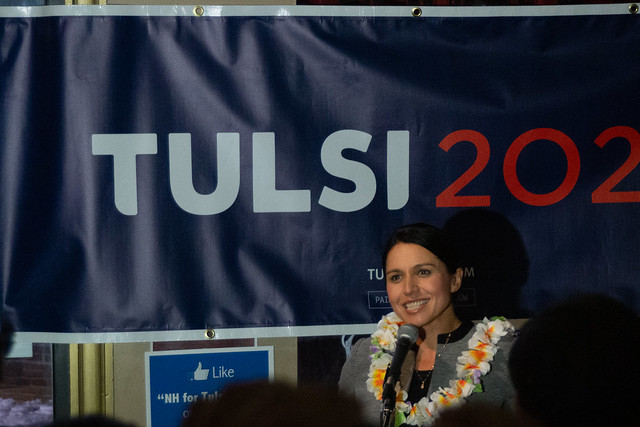 In the last two weeks, President Trump has attracted two challengers to his re-election bid for his own party’s nomination.  Former South Carolina Governor and member of the US House Representatives, Mark Sanford, announced his bid for the Republican nomination on Sunday.  He joined former member of House, Joe Walsh, who joined the race in late August alongside former Republican Governor of Massachusetts (and the Libertarians’ 2016 vice-presidential candidate), William Weld.

The two most recent entrants into the Republican primary campaign have received considerable attention from media since announcing their candidacies.  This has been particularly the case among more partisan outlets and commentators who, as any cynic will argue, have discovered new-found respect for these challengers because they pose a challenge to President Donald Trump’s re-election bid.  Such attention to the Republicans’ outsider candidates joins the efforts of Republicans and conservative media to promote Tulsi Gabbard, who landed a scathing critique of Kamala Harris in July’s Democratic debate, and whose foreign policy views stand at odds with those of many of the leading candidates.

Although not new, this phenomenon of cheering for the other party’s outsider candidates seems more intense this election cycle.  Because the two parties’ bases of support are divided on several key issues, each party is susceptible to ‘wedge’ issues, which divide parties internally to such a degree that taking a position on the subject will drive away potential supporters.  As a result, we can expect that both parties will continue to highlight outsider candidates in the other party during the primaries and beyond – lasting into the general election.

Among Voters, More a Democratic than a Republican Phenomenon

Are the media promoting outsider candidates due to these candidates’ popularity among voters in the other party, or for some other reason?  Figure 1 shows that the phenomenon of cheering on the other party’s outsider candidates, to the extent that it exists, occurs primarily among those who identify as Democrats.  Figure 1 uses data from the Economist/YouGov poll conducted between 8 and 10 September, which comes immediately after Mark Sanford’s announcement and two weeks after Joe Walsh’s entry into the race. 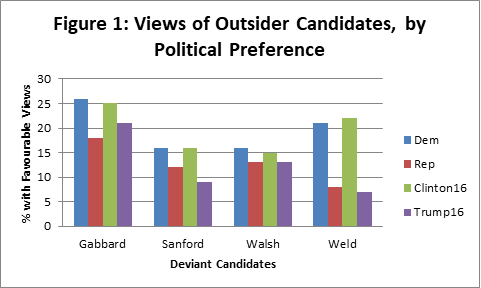 Among the three outsider Republican candidates, we see more evidence of the Democrats cheering for the other Republicans’ outsider candidates.  While Republican identifiers tend to have more favourable views of Mark Sanford than the average 2016 Trump voter, both hold considerably less favourable views of Sanford than Democratic identifiers and 2016 Clinton voters.  The disparities between Republicans/Trump voters and Democrats/Clinton voters are even starker when looking at views of William Weld.  Though views of Joe Walsh are somewhat higher among Republicans and 2016 Trump voters than their views of Sanford or Weld, these groups’ views are nonetheless weaker than the views of Democrats and 2016 Clinton voters.

Thus, Figure 1 shows that if anyone is cheering for the other party’s outsider candidates, it is the Democrats cheering for Republican challengers to Trump.  That said, one certainly should not overstate the amount of affection shown to outsider candidates in the other party.  While Democrats and Clinton voters are more likely to hold favourable views of Republican challengers to Trump than Republicans and Trump voters, none of the three challengers sees the share of outsiders holding favourable views of them reach 25 per cent.

The Goal: Influencing Not the Primary but the General Election

While there may be some support for outsider candidates in the other party, one should keep in mind that the goal is not necessarily to upset the other party’s top candidate(s) in the primaries.  Although the 2016 campaign taught us never to rule anything out, defeating an incumbent president in the primary is almost unthinkable.  Even though Joe Biden has faced tougher competition from other candidates in recent weeks, Tulsi Gabbard almost certainly has no chance of being the Democrats’ 2020 nominee.  The low levels of Republican support for Trump’s three challengers make them equally odds-on losers.

Instead, the idea of supporting (or at least giving attention to) outsider candidates in the other party is to wound the eventual nominee enough that voters in the general election will have a tough time voting for the candidate.  The vulnerability of incumbent presidents to strong primary challengers is well known: George HW Bush lost re-election in 1992 while Lyndon Johnson quit his 1968 re-election campaign after stronger-than-expected New Hampshire primary challenges.  Thus, we can expect that the Democrats will seek to promote the Sanford, Walsh, and Weld candidacies in an attempt to undermine Trump’s re-election campaign.

Although Republicans are less-than-enamoured of Gabbard and her policies, we should expect similar efforts by the Trump campaign.  Because many of Gabbard’s foreign policy views – as well as some of her views on ‘identity politics’ and what she views as other candidates’ pandering – stand at odds with some of the leading candidates in the race, we can expect that the Republicans will seek to use her views on these issues to drive a wedge among Democratic voters in much the same way that Bernie Sanders did for Hillary Clinton’s 2016 campaign.  Should any soundbites emerge from tonight’s debates that divide opinion among Democrats or embarrass any of the leading candidates, expect the candidate(s) involved to attract coverage and attention from Republicans similar to that received by Gabbard in recent weeks.