Dr Andrew Thomson looks at the ongoing challenges that face President Santos and the Colombian government following the recently-signed peace accord with FARC. 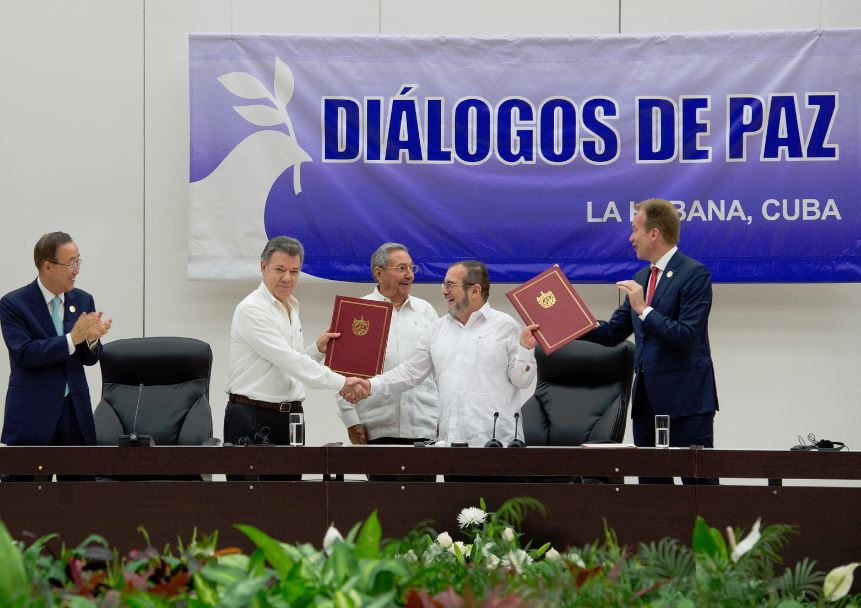 After 4 years of talks and a rejection in a national referendum, the Colombian government and the country’s largest left-wing insurgency, the FARC (Revolutionary Armed Forces of Colombia), recently signed a revised peace accord which has now been ratified in Colombia’s Congress (1 December 2016). The negotiated settlement potentially marks the end of a conflict which has raged for five decades, killing hundreds of thousands, and produced some of the world’s highest numbers of internally displaced people.

This bi-lateral agreement between the government and the FARC is a promising sign for the peaceful future of the country. President Santos, who won the Nobel peace prize for his efforts, proclaimed to an international audience an end to the war and that the FARC would lay down their arms within 90 days of this approval. Built on some of the successes of this, similar talks are underway with the ELN (National Army for Liberation), another smaller insurgent group that shares a similar history with the FARC.

Yet despite this, considerable challenges remain. There are a variety of threats to the effective implementation of the peace process. This is particularly the case given that there remains considerable opposition to the revised peace deal. For many, the terms of the agreement are too lenient on demobilised FARC combatants. However, one major concern, yet one that is largely underreported in international media, is that of the continued presence and operations of anti-insurgent, right-wing pro-government militias, referred to in Colombia as “paramilitaries”.

Multiple previous attempts of brokering peace between the Colombian government and left-wing insurgencies were derailed by paramilitary forces. For example, during government-FARC peace talks in the mid-1980s, right-wing paramilitary groups systematically targeted the Unión Patriotica (UP), the left-wing political party founded by the FARC and the Colombian Communist Party. Around 2,000-3,000 UP members were killed, including two UP presidential candidates. The FARC subsequently took up arms again and the war resumed. Then in the early 1990s, in the successful demobilization of a variety of other left-wing insurgencies (M-19, EPL, CRS, PRT, and MAQL), paramilitary forces carried out attacks against the former combatants and assassinated the M-19’s chief commander and presidential hopeful, Carlos Pizarro. In another failed attempt at negotiating peace with the FARC in the late 1990s and early 2000s, the FARC stopped negotiating with the government several times citing paramilitary violence against them. In 2000, the AUC (United Self-Defence Forces of Colombia), an umbrella organisation of right-wing paramilitary groups, kidnapped members of the Colombian Congress hoping to stall peace talks between the government and the FARC.

In the context of the contemporary peace talks, the issue is that according to the Colombian government, paramilitary groups no longer exist. The Colombian government conducted a demobilisation programme of paramilitary fighters, which was said to be complete in 2006. The AUC was dismantled and many of its top commanders were sent to serve sentences in the United States, primarily on drug-trafficking charges. In its wake various so-called criminal bands, referred to as “BACRIM”, began to appear. Some of these groups include Aguilas Negras, Los Rastrojos, Los Urabeños, Paisas, Nueva Generacion, Gaitanista Self-Defense Forces among many others and are often led and composed by former AUC members. The Colombian government officially dismisses these BACRIM as purely criminal entities that continued drug-trafficking after paramilitary demobilisation. According to the government, paramilitary forces officially no longer exist.

However, contrary to that depiction of BACRIM as a purely criminal, drug-trafficking remnant of the paramilitaries, numerous human rights reports, international observers, and the media have reported high levels of violence mirroring the modus operandi of paramilitary political violence. Some successor groups have reportedly attacked union leaders, threatened human rights defenders, increased violence against activists and community leaders, and internal displacement has continued. Successor paramilitary groups have also threatened prominent politicians supportive of the peace process, including the mayor of Bogota.

According to some human rights organisations, paramilitaries are responsible for the majority of Colombia’s human rights violations. Some constitute large, militarily organised armed groups, mirroring traditional paramilitary structures. During the course of negotiations the FARC have repeatedly called on the government to address continued paramilitary activities and the threats to FARC member safety should they lay down their arms and join the political process. Paramilitary violence against progressive social organisations such as unions as well as direct threats to the safety of ex-FARC members pose significant obstacles to conflict transformation. This will certainly continue to be the case if these groups continue to expand their operations.

The Colombian government has, publically at least, put itself in a tenuous position regarding these new paramilitary-like or successor paramilitary groups. Focusing on the criminal activities of “BACRIM” makes it difficult to address the politically-motivated violence of these new organisations. Indeed, the Colombian government has refused to include them in negotiations.

However, crucially, the government and FARC have signed a “security guarantees agreement” (agreed on 23 June 2016), as part of the peace process, to safeguard former FARC members’ and a broader range of left-wing actors’ political participation. Much of the onus to demonstrate its commitment to these terms is on the government, given the previous para-politica scandal and exposed links between traditional paramilitaries to many at the highest echelons of government and military, including, allegedly, former President Uribe (who is now leader of the opposition to the current peace accords). There does seem to be a willingness on behalf of the government to address some of these issues, and it recently has legally reclassified some BACRIM as organised armed groups, allowing the Colombian military to target them.

Overall, there is a lot of room for optimism for peace in Colombia. However, the course of the FARC transition from armed conflict to participation in politics over the next few months and years will be telling. This period will be the true test of the peace process. The government must implement its promises and the FARC must lay down its arms to begin the long road to integration. These are tense times for all. Will both sides commit? In particular, if the Colombian government and the FARC want to avoid repeating history, they will need to work hard to balance a bi-lateral peace agreement in the context of multiple warring groups. This is difficult enough with the presence of many insurgent groups, although it seems the ELN is following the road towards peace. It is harder still given the continued existence of anti-insurgent, pro-government militias in the form of new successor paramilitary organisations.

Dr Andrew Thomson is a lecturer in the School of History, Anthropology, Philosophy and Politics at Queen's University Belfast. His research interests include terrorism, international security, US foreign policy, US and Latin American relations, conflict analysis and peace science, and non-state actors in civil war.

Why Putin has pulled Russia out of Syria