In this, the decade of centenaries, Professor Keith Lilley takes a look at the complexities of the commemoration of war and highlights that the various commemorations in 2016 have led to popular discussion and political debate around remembering.

“Poppy Wars” was how one tabloid newspaper headline described the recent Fifa ruling on poppy-wearing on the pitch. While replaying a Christmas truce football game offered an early seemingly innocuous opportunity for remembrance in 2014 at the start of World War I’s centenary, the latest controversy over wearing poppies at international matches reminds us too that that commemoration of a war is in fact a complex issue.

2016 is a pivotal year for the centenary of the Great War, apart from marking the halfway point through the centenary itself it has of course seen the commemoration not only of momentous events on the battlefields of the Western Front, with the solemnity of the opening of the Battle of the Somme in July, but also on the ‘home front’, too, with the Easter Rising that led to the formation of the Republic of Ireland. The close juxtaposition of the Somme and Easter Rising centenaries, and their continued cultural resonances on the island of Ireland, and traditional alignments with Unionist and Nationalist ideologies, were a cause of some concern in political circles in both Ireland and Britain.

But instead of acting to polarise and divide us, 2016 and the centenary of 1916 has in fact had the opposite effect on the island, proving to be a fertile ground for popular discussion and political debate throughout the year. Not all commemorative events of 2016 have drawn communities together, but many have. Beyond the laying of wreaths and national ‘acts’ of mourning at memorials and on key dates of the war – as will be the case again this week at the Cenotaph – a myriad of smaller, more personal commemorative practices of individuals and groups have been occurring in communities all across these islands. From drama and story-telling, through to landscape archaeology and digital mapping, a host of local centenary projects – many funded by the Heritage Lottery Fund (HLF) “First World War: Then and Now” scheme – are each particular acts of memorialisation and remembrance, and each are complicating commemoration itself. 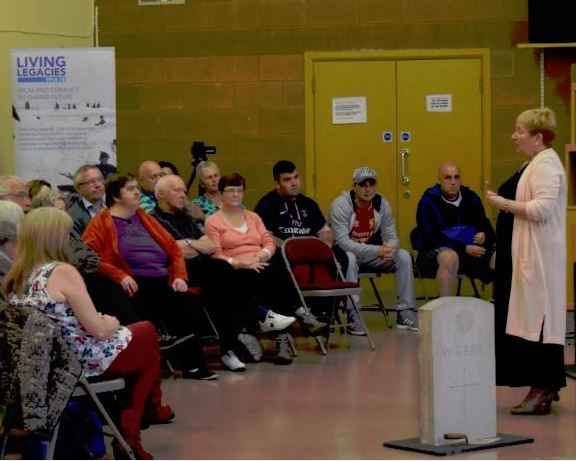 While the war’s centenary plays out at international and national levels, and as poppies are fought over on the front pages, the localised nature of commemorating World War I is surely of some significance? The community based projects researching service personnel who joined up from local areas, or that seek to find in particular localities the traces of wartime training camps, munitions factories or airfields, serve as a reminder that the war is bound into local, regional as well as national cultural identities.

These grass-roots ‘volunteer’ researchers might be contributing to wider, national programmes, such as the Imperial War Museum’s “Operation War Diary”, or the Council for British Archaeology’s “Home Front Legacy” project, or instead feeding personal interests and an enthusiasm for learning more about the past and sharing this with others, but either way the centenary of the war is providing scope for community engagement on a scale that is unprecedented.

Part of this commemorative landscape, and forming a link between community research projects and academic researchers in universities, museums and archives, are five ‘public engagement centres’, funded by the Arts and Humanities Research Council. Set up in 2014, one of these centres is based at Queen’s University Belfast, offering local projects and groups opportunities for collaboration, both between each other and also with specialists in a range of subjects, from cultural geography to performing arts.

Called ‘Living Legacies 1914-18’, the centre’s emphasis is on shifting the focus from key military events of World War I, however significant these are, and consider more the localised impacts of the war and its enduring legacies today. Working with local community groups across the UK over the past three years of the centenary has underscored the great interest and appetite there is for understanding the Great War, but as academics too there is much to learn from this process of public engagement and commemoration of World War I.

The plethora of community-based centenary projects captures and reflects what the war means to us today, a hundred years on, and the significance that the war still has for so many in Britain and Ireland. As Remembrance Sunday once again comes round, and poppies will be worn by many (though by no means all) as an act of personal commemoration, the furore both on and off the pitch reminds us of the need to take a more critical and complex view of commemoration, and what it is to remember.

Keith Lilley is a Professor in the School of Natural and Built Environment at Queen's University Belfast. Professor Lilley's expertise lies in interpreting historic landscapes, maps, and built environments, in particular using geospatial technologies. He is currently leading on ‘Living Legacies 1914-18: From Past Conflict to Shared Future’ – an Arts and Humanities Research Council (AHRC) funded public engagement centre based at Queen’s University to foster collaborations between academic and community researchers on the heritage of World War I.

The Irish settlement: an often ignored legacy of World War I

Women in the Easter Rising