Partition and the Limits of Irish Commemoration: Reflections on 1921 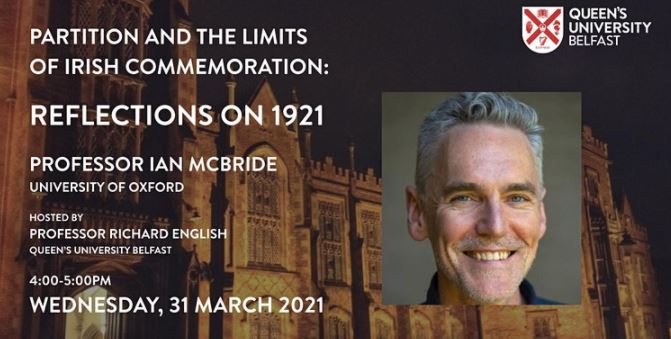 Questions can be submitted during the live event.

To find out more, and to register for the event, please click HERE.

Ian McBride joined Hertford in 2016 as the Foster Professor of Irish History. The Foster chair is the only endowed chair of Irish History in Britain, and is attached to Hertford, the Oxford college with the strongest Irish associations. He has broad interests in Ireland between the seventeenth and twenty-first centuries, especially its politics, culture and intellectual life. He currently holds a Leverhulme Major Research Award which will enable him to spend two years researching and writing a study of the impact of the penal laws on eighteenth-century Ireland.

Professor McBride grew up in County Armagh, and his interest in History flowed naturally from the political instability and intensity of Northern Ireland in the late twentieth century. He was educated at Jesus College, Oxford and University College London, and was awarded a research fellowship at Corpus Christi College, Cambridge (1993-96). Between 2000 and 2016 he taught at King’s College London.

His books include The Siege of Derry in Ulster Protestant Mythology (1997) and Scripture Politics: Ulster Presbyterians and Irish Radicalism in the Late Eighteenth Century (1998), both short-listed for the Christopher Ewart-Biggs Literary Prize; and Eighteenth-Century Ireland: The Isle of Slaves (2009). His most recent publication is The Princeton History of Modern Ireland (2016), edited with Richard Bourke. Professor McBride is currently completing work on Irish Political Writings I, a volume for the new Cambridge Edition of the Works of Jonathan Swift.

Since 2004 Professor McBride has been convener of the Conference of Irish Historians in Britain which he now organises jointly with Dr Caoimhe Nic Dháibhéid. This conference was founded by Marianne by Marianne Elliott and Roy Foster and has held biennial meetings for 40 years. It provides the main forum for Irish historians working on this island to present their work. Further details can be found on the conference website (http://irishhistoriansinbritain.org/), which also contains twenty-two short pieces written to commemorate the centenary of 1916.

Professor McBride has presented his research to a wide range of audiences, from the Presbyterian Historical Society in Belfast to Coiste na n-Iarchimí, an ex-prisoners organization consisting of former members of the Provisional IRA, in South Armagh. As part of Derry’s year as city of culture (2013) he organized a conference on the history and legacy of the Siege of Derry in collaboration with the Apprentice Boys. He has been interviewed for a variety of BBC Northern Ireland programmes, and was presenter and consultant on a one-hour documentary entitled Forgotten Revolutionary: Francis Hutcheson, first broadcast on BBC2 on 25 July 2012; he was also a panelist on the In Our Time episode on A Modest Proposal.