Floods, Resilience and dealing with Climate Change (and Denial) in Northern Ireland

Professor John Barry reflects on the recent flooding in Northern Ireland and calls for more coordination and leadership in preparing and planning for climate-created flood events. 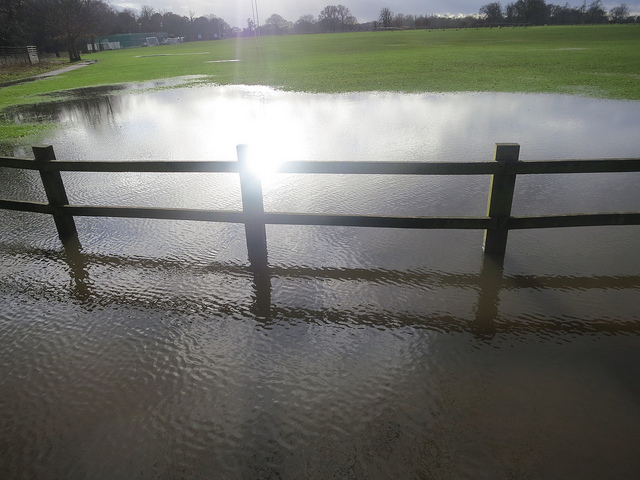 The recent devastating floods in Derry and the North West have rightly dominated the news in recent days in Northern Ireland. But the less discussed issue is the climate change story behind these floods.

The cause of climate change – greenhouse gas emissions (especially carbon dioxide from burning fossil fuels) – comes from power generation, industry, transport, habitat loss and deforestation as well as land use and agricultural practices; these all increase global temperatures. Such global changes have local impacts, as we have seen in the flooding in the North West. Warmer temperatures mean the atmosphere can hold more water that in turn prompts more intense rainfall. For every 1 degree the global climate system warms, the atmosphere can hold an addition 7% of water vapour. The reality is that at some point this has to fall back to earth. These intense precipitation events can, as we have witnessed, cause flash flooding with rain falling too quickly and forcefully to soak into the ground soil.

Climate change in this way is a ‘threat enhancer’ and a serious ‘risk magnifier’. Adapting to climate change events such as extreme flooding is a form of prudent risk management in order to protect properties and livelihoods, built infrastructure, ecosystems and to keep people and communities safe.

Adaption and Resilience to climate change

The reality is that climate change is real; it’s happening now and even if we were to stop burning fossil fuels, and the other activities that contribute to greenhouse gas emissions, this would not prevent the inevitable change in the climate already built up in the climate system. This is why climate policy focuses on ‘adaptation’ as well as ‘mitigation’. Mitigation seeks to remove the root causes of climate change, while adaptation focuses on minimising the negative effects of climate change.

More work on adaptation to extreme weather events due to climate change is needed including building in resilience to our natural and built systems, or where necessary retrofitting our built infrastructure (roads, buildings, community and sports facilities, hospitals, electricity stations, factories, schools etc.) so that they are resilient to climate-related weather events.

These events go beyond flooding and include higher temperatures; reduction in soil moisture and compacting of soils; storm surges; subsidence; trees falling on power lines in storms; drier summers leading to increased risk of fire; crop loss. For a fuller analysis see the 2007 report Preparing for a Changing Climate in Northern Ireland.

But flooding – including coastal flooding – is the main (and most costly) climate change impact we can expect to see on the island of Ireland. Put simply, large sections of our infrastructure (and indeed economy and ways of life) were created in the context of a stable climate. In a more unstable climate system, with more frequent and intensive extreme weather events, this infrastructure is ‘unfit for purpose’ and needs to be made climate resilient.

One of the issues which needs to be looked at in the aftermath of these (and other flooding events) is land management practices/use, to see if these contributed to the flooding. As a recent UK Climate Change Committee report noted in its analysis of the climate threat to Northern Ireland:

Agricultural land accounts for over 75% of Northern Ireland’s land area, which means that the way in which it is managed can have a profound effect on the wider impacts of flooding… there is evidence that some land management practices have a particularly adverse impact on downstream flood risk, including maize cultivation on slopes, over-stocking of livestock and the drainage of blanket bog habitats”. Pp.18-19

So while there does need to be a review of the response by statutory agencies to the flood, which has been the main (and inevitable) call by local politicians,  there also needs to be a more detailed review of whether farming, land use/management and planning decisions have contributed to making built infrastructure such as roads, bridges, airports etc. less resilient to such intense precipitation events. But we also need to look at the natural environmental impact as well and see whether such land use management practices have left species, habitats, and ecosystems vulnerable to damage from floods and heavy rain.

A major problem here is that as it stands, there are no incentives or regulatory requirements that obligate farmers and other land managers to assess the extent to which their practices may be exacerbating flood risk. If Northern Ireland is to increase its resilience and adapt to climate change, notably flooding, this has to change and change quickly! Inevitably, as with almost all issues these days, there is a Brexit twist to the tale. Many of the main policy and regulatory drivers to help climate adaptation come from the EU in the form of the Water Framework Directive, the Common Agricultural Policy, Habitats Directive and so on.

Finally there are some significant local political obstacles that also stand in the way of Northern Ireland adapting to climate change. The fact that some senior local politicians, such as Sammy Wilson MP, publicly deny climate change is, to put it mildly, a problem. In fact, if it were not for the fact that the UK Climate Change Act covers Northern Ireland, as a non-devolved issue, it is not an issue that Northern Ireland has to take seriously.  So, even when Sammy Wilson was Minister for the Environment, he could not prevent the application of the Climate Change Act to Northern Ireland (though he did ban a TV advert on climate change in Northern Ireland which called for emissions reductions calling it ‘insidious New Labour propaganda’). A related issue here, and one that touches upon the recent Brexit vote and the success of Donald Trump, is how a rejection of expertise and experts seems to be part and parcel of the rise of populist politics.

So, while the evidence is there for climate change, and models have been developed to show how Northern Ireland’s weather will change over the coming decades as a result of climate change, there has been little real political leadership on this issue. Local governance, civil servants, statutory agencies and politicians seem set to once again act, in terms of enhancing the resilience and adaption of Northern Ireland to climate change events, only on the back of a localised crisis or ‘focusing event’ such as the recent floods in Derry and the North-West.

While it is to be hoped that a more proactive planned approach to making sure our built and natural infrastructure is climate resilient should be one of the outcomes of the flooding, it is sadly a case of fixing the roof when it’s raining. When of course the smart and cheaper thing to do is fix the roof when it’s sunny. Especially when we have scientific forecasts for rain…

And we could start with something that even climate deniers would accept – to recognise the serious problem with Northern Ireland being the only part of UK without a flood forecast/alert service. Or fixing the fact that there is no single government department with systems in place to manage the risk from coastal erosion, leaving us, as the CCC report noted, with the reality that:

shoreline management plans or other policies that assess and plan for changes to coastal communities have not been developed for Northern Ireland (p.52).

While there is a ‘Regional Community Resilience Group’ (RCRG) chaired by local government and the Rivers Agency, part of whose remit is to identify communities vulnerable to flooding and to give them advance warning, this group seems not to have been effective. There needs to be more coordination and leadership on preparing and planning for climate-created flood events within government. Protection, planning and preventing the negative impacts of flooding should be a priority before compensating people once they are flooded as it were. However, the reality is we will also need compensation, but as the old saying has it ‘prevention is better than cure’.

That would be a good start in making Northern Ireland less vulnerable to future extreme weather events and should be a priority that our politicians, citizens, farmers and business should be calling for. That and accepting that even if you don’t accept climate change, it’s going to affect you regardless of your denial.  Flood defenses and creating or retrofitting to create resilient infrastructure works much better than climate denial, as those who have been affected by the floods will no doubt tell you.

Interesting piece particularly in view of last weeks local storm damage which was particularly bad in the scenic Glenelly Valley of Tyrone. that river flows into the Foyle
joining other tributaries from tyrone and Donegal, the drinking water in the North West.
However the considerable Funding from EU and UK in relation to renewable energy turned out via rhi just to emphasise the political problems here and their link to the Institiutional framework, Formal and Informal

I would to know more about the affects of global warming and climate change in donegal and north west ireland. Very concerning. Thinking of building house there near coast line. Advise very welcome.