Dr Gemma Carney looks at how research on ageing has evolved into a vibrant, multi-disciplinary field that aims to support our ageing population. 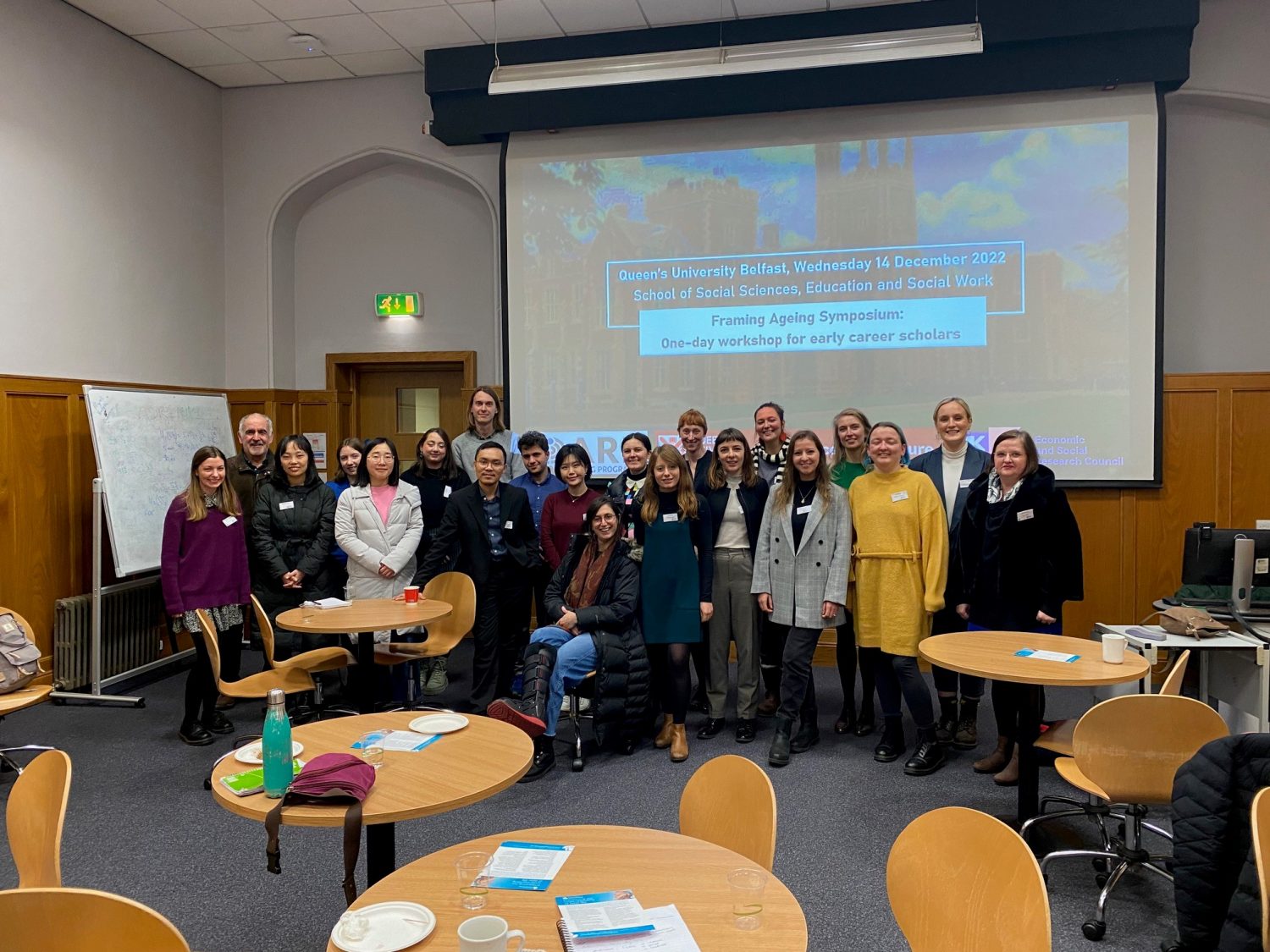 Working as a researcher on ageing societies can sometimes get dispiriting. The 30 year ‘crisis’ in social care, the massive casualties of the COVID-19 pandemic and depressing evidence of widespread ageism in social media might lead you to conclude that the whole sorry thing is best avoided. That’s the public narrative. The reality of working in research on ageing is that it is a vibrant, multi-disciplinary field of enquiry which is full of dynamic and hard-working people who are determined to tackle this grand societal challenge head on. A really good example of this is the Framing Ageing network.

Framing Ageing is an international clinical, cultural and social dialogue which facilitates methodological exchange between geriatricians, gerontologists, humanities researchers, social scientists, and practitioners, who can benefit from transdisciplinary collaboration.. On Wednesday 14 December, 2022 the ARK Ageing Programme and the Science and Culture Research Group at Queen’s University Belfast hosted Framing Ageing’s first Early Career Researcher (ECR) symposium. The papers presented by scholars from universities across the UK and Ireland demonstrated how research on ageing is one of the most vibrant areas of inter and transdisciplinary research today.

This question of what it means to work across disciplines was eloquently articulated by keynote speaker, Hannah Zeilig, University of the Arts, London in her talk entitled ‘The Pleasure of Finding Things Out.’ Hannah outlined how her body of work on dementia has led her across a broad range of fields of enquiry from music and dance to neuroscience in pursuit of a better understanding of human ageing. Hannah reflected that doing interdisciplinary research sometimes makes you feel like you are existing in the corridors between established lines of enquiry, she concludes that the most difficult questions require us to cross traditional boundaries.

The rest of the day was spent listening to and discussing papers from seventeen ECRs and PGRs from as far afield as Slovakia and South Korea (the programme and book of extracts are available here). The arts and humanities were well represented as papers covered material culture, spirituality, music, theatre, literature, film and the sonic arts. In the fields of social science papers on end of life decision-making, loneliness, independent living and grandparent involvement in childcare were discussed. A constant thread through the day’s discussions was the need for critical enquiry of the status of ageing and older people, particularly when focusing on tackling the ‘problems’ of an ageing population can require a rather obsessive focus on decline. However, there is also a strong line of enquiry which seeks to find scientific evidence to support healthy ageing, through the investigation of how different drugs interact and how the secret to a good old age may actually lie in simple things like physical activity, preferably in a green or blue space. Blue space such as a lake in the local park was one of my favourite new words learnt on the day.

In the final roundtable discussion, we outlined future opportunities for ECRs, the challenges of a fairly hostile job market for many of them and the need for an end to casualised contracts for their generation.

However, the real takeaway from this conference was that in order to improve the experience of human ageing for our future older selves, we need to mobilise all of our resources – whether they be in art, music, drug therapy or advocacy.

From a personal perspective, it was incredibly enriching to be reminded that you cannot beat the conviviality of an in-person meeting of a group of people who know what is important and are determined to do something about it. The future of research on ageing is in safe hands.

Dr. Gemma Carney is a senior lecturer in social policy and ageing at QUB. Her work in social and cultural gerontology has been published in all the major gerontology and social policy journals. Her 2020 book Critical Questions for Ageing Societies (with Paul Nash, USC) was nominated for the Richard Kalish Award for Innovation in Research on Ageing in 2021. She is open to PhD and postdoc applications in all aspects of social and cultural gerontology.