Following a recent trip to Sabah, Dr Joshua Twining looks at why lizards appear to be particularly at home in the oil palm plantations of Borneo. 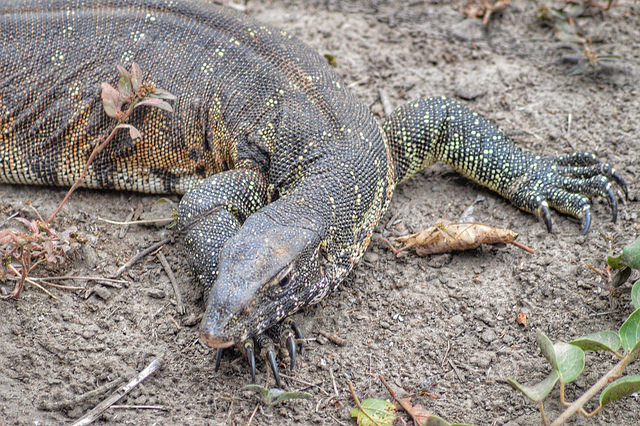 Oil palm trees plague the once untouched and wild island of Borneo. Towering rainforests have been chopped down and the land turned into a monotonous monoculture of plantations, the principle source of palm oil. In the Malaysian region of Sabah, in the north of the island, these trees now cover a staggering 20% of the entire state.

The problems caused by palm oil have been well documented. Deforestation has led to huge fires, massive carbon emissions, and left orangutans on the brink of extinction. But what is happening on the plantations themselves? What has large-scale logging and forest conversion done for the ecosystem and its biodiversity?

Scavengers are an important but often overlooked group in understanding how ecosystems function. They provide vital services including the removal of carrion, which is a crucial component in recycling nutrients and preventing disease. And disruption of these groups has possible far-reaching implications. To investigate how scavenger communities were adapting to the new reality of oil palm plantations, I went to Sabah. Colleagues and I designed and made our own baited traps and set them up at various different sites along rivers within the Stability of Altered Forest Ecosystems (SAFE) project. Some traps were in virgin jungle, others were in logged forest of varying levels of disturbance and some were among oil palm.

We captured 118 individual animals in all, with the most abundant being the Malay civet and the South-East Asian water monitor, a large lizard. Our bait was also investigated by domestic dogs, collared mongoose, smooth-coated otter, short-tailed mongoose, bearded pigs and sun-bears. Our results were published in PLoS One.

There was a consistent trend: the more disturbed the land, the more water monitors we found, while their numbers decreased as we moved away from plantations into untouched forests. In fact, the Malay civet was the only native mammal recorded alongside water monitors in oil palm at all, and even this species preferred higher quality forest sites.

So why would lizards appear to be particularly at home in these plantations?

The South-East Asian water monitor (Varanus salvator macromaculatus) originally evolved in the region’s mangroves and has remained largely unchanged for around 17m years. It’s primarily adapted for life in and around water, with nostrils positioned high on the end of an elongated snout for breathing while submerged, and a long tail that works as the perfect aquatic propulsion system. However, when the monitors are threatened the tail turns into a powerful club with a jagged crest that makes it all the more dangerous.

Among rural populations in Borneo, water monitors have a negative reputation as a scavenger and a pest. But in most of their extensive range they are actually active hunters with eyes adapted for detecting movement, claws for climbing and gripping prey, and an arsenal of 60 backward-facing serrated teeth that evolved to cause maximum laceration and bleeding in their prey.

These “dragons” have a phenomenal ability to eat almost anything that can fit inside their stomachs. Their diet includes small invertebrates, crustaceans and amphibians through to larger mammals, birds and their eggs. They’ll even eat other monitors.

As stress sometimes makes water monitors regurgitate their stomach contents, we were able to make some opportunistic observations of their diet. We found some truly mind boggling items, from human refuse such as instant noodle wrappers through to porcupine spines which are so hard and sharp they pierce through human skin with ease and deter almost all other predators.

This unfussy eating is what enables water monitors to survive in the wasteland of oil palm. In the natural forests that surround the plantations, they face competition from mammal scavengers and predators such as sun bears, otters, civets and mongooses. There, water monitors are found only in relatively low numbers and at significantly smaller sizes.

But those mammals struggle to survive in the plantations, where a lack of shade boosts the temperature and lower plant diversity filters up through the food chain. Lizards can handle the heat, of course, and the presence of extra food from human refuse means water monitors appear to thrive there, reaching terrifying sizes and high numbers.

A landscape filled with roaming giant lizards soon becomes a battle arena. Unlike smaller lizards who settle their disputes with a subtle arm waves, tail wags or flapping of their dewlap (neck skin), water monitors use a more archaic means: fighting. They stand on their muscular hind legs, stomach pressed to stomach and wrestle, they rip and claw and bite and tear, until one submits.

This “survival of the toughest” is what drove the males of the species to reach such formidable sizes. But it is also one of the reasons why degraded habitats such as oil palm may be an ecological trap. The easy availability of food from human garbage sites or domestic animals draws in extra male monitors, resulting in a heavily skewed sex ratio. Increased competition for prime spots in the plantations then means they use up lots of energy, and risk serious injury just holding onto their territory and fighting off other males. The increased parasite load that comes from living at high densities reduces overall fitness of individuals, and in addition to energetic costs to adults, increased densities of a species that cannibalises juveniles of the same species, greatly deduces the chance of young making it to adulthood.

For now, these giant lizards appear healthy. Of Borneo’s large native scavengers, they are the only species that has successfully adapted to the plantations. But, in the long run, due to the culmination of adverse effects, water monitors may be doomed to the same fate as the bears and other mammals that once inhabited the space now dominated by oil palm.

Joshua Twining is a PhD Student in Biological Sciences at Queen's University Belfast where he is researching the ecology, conservation and management of a recovering native predator in Ireland: the European pine marten.