How the DUP changes Brexit

John Garry and Kevin McNicholl look at the implications of a Conservative/DUP arrangement, particularly in terms of Brexit. 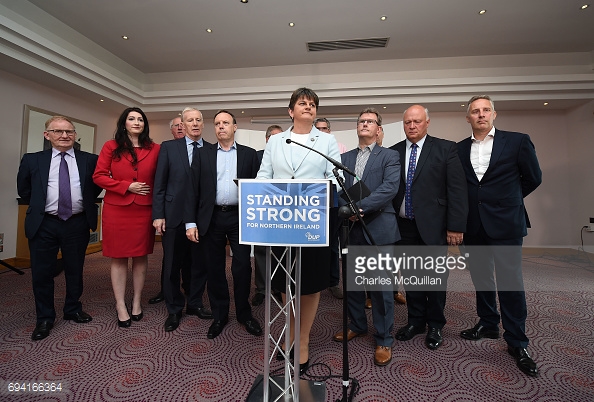 The terms ‘government formation’ and ‘Northern Ireland’ have in recent times only been associated together in a negative sense, and so it is with wonderful irony that the two parties that cannot put together a functioning executive in Northern Ireland may be key players in assembling an administration in Westminster.

Sinn Fein’s policy of abstention means that it does not take up the seats it wins at Westminster, although it must be highly tempting for the party to ditch that approach if it meant any chance of getting Jeremy Corbyn, a long time ally, over the doorstep into Number 10. But even retaining their ‘stay at home’ policy influences matters as it slightly reduces the number of votes needed to attain a majority in the Commons. This makes it slightly easier for Sinn Fein’s arch political enemies – the Conservatives and the Democratic Unionist Party (DUP) – to potentially reach a deal.

If a Conservative/DUP arrangement emerges from the strangely swirling ashes of this election, it obviously puts the DUP in a pivotal position. The DUP, like all parties, has policies on a range of issues but the party’s line on Brexit will be of most interest. At face value one might think that this is a distinct issue, separate from the usual policy themes from Northern Ireland relating to divisions between Catholic/nationalists and Protestant/unionists.

However, Brexit in Northern Ireland has emerged as just as much an ‘ethno-national’ issues as the other basket of tricky issues ever present in Northern Ireland which generally relate to attitudes to either a united Ireland or continued maintenance of the union with the rest of the UK.

Catholic nationalists see a ‘hard brexit’ and the emergence of a ‘hard border’ between Northern Ireland and the Republic of Ireland as potentially cutting off their link to the rest of Ireland, and one response to that is agitating for a united Ireland which would enable Northern Ireland to ‘rejoin’ the EU.

Unsurprisingly Protestant unionists are not terribly in favour of this approach. The temperature of this difference could rise to quite hot levels if the DUP is, either in formal or informal coalition, driving the Westminster government firmly in a hard Brexit direction.

While the DUP advocates Brexit, it shares the concern held by most unionist and nationalist politicians that a hard border would be detrimental to trade and travel. It wishes the ‘particular circumstances’ of Northern Ireland to be taken into account in the Brexit negotiations and would prefer a ‘frictionless border’ to a ‘hard border’.

Crucially, the DUP is opposed to any internal UK borders, and so the idea of having a ‘soft’ north/south border but controls at the east/west level would be seen as splitting Northern Ireland away from the rest of the UK and would be unacceptable to the DUP.

There is an element of wanting to have your cake and eat it when one argues for a combination of a hard Brexit but no east/west or north/south accompanying hard border. Coming up with an innovative solution to this conundrum would be top of the agenda for the possible May/Foster team. There is a delicate balance to be struck by the DUP. It may seek to achieve its Brexit policy objectives and utilise its Westminster bargaining position to do so.

But the party will not wish to risk alienating all those Catholics in Northern Ireland who have been happy to stay in the UK and have not been keen on a united Ireland. Raising the salience of a border poll at a time of ‘hard Brexit’ could add even more constitutional complexity to these strangely uncertain times.

Kevin McNicholl is a Postdoctoral Researcher in the School of History, Anthropology, Philosophy and Politics at Queen’s University Belfast.

Article first appeared in The UK in a Changing Europe .