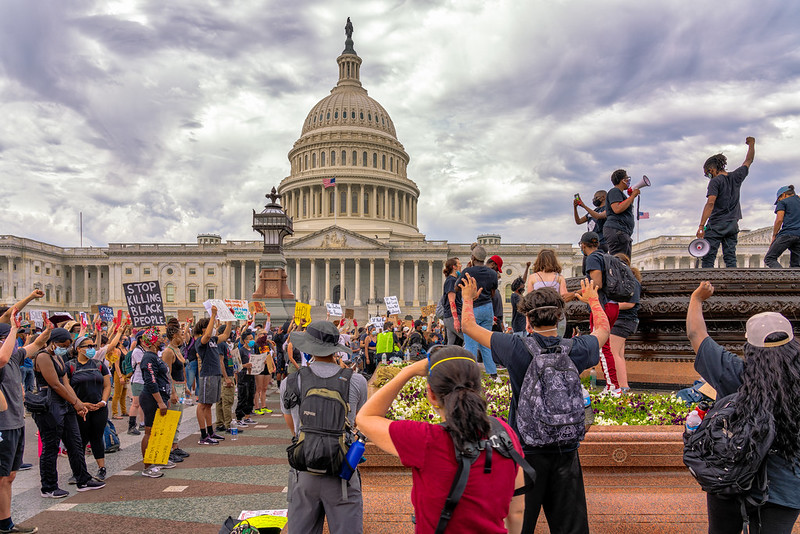 Following the police killing of George Floyd in late May 2020, protests around police brutality, injustice, and systemic racism surfaced across the country and globe.  In the United States, the epicenter of these protests emerged in Portland, Oregon.  In early July, the Trump administration, without request from state and local authorities, deployed federal border and immigration enforcement officers to Portland to quell the ongoing demonstrations in what the Justice Department singled out as an “anarchist jurisdiction.”

On the evening of July 15, Evelyn Bassi, a transgender Portland resident attending one of the protests, was approached by two officers in camouflaged tactical gear with “Police” patches across their chest.  She was forcibly detained, without explanation, in the back of an unmarked dark gray Dodge Grand Caravan with tinted windows and driven away.  “They never said who they were,” Bassi said. “I didn’t know if I was going to be seen again.”  Later, she was released after the agents realized she was not the person they were seeking but warned: “You know, bro, we have cameras everywhere.”

Deploying militarized federal forces who forcibly detain civilians without explanation and whisk them away in unmarked vehicles is a long-standing tactic of authoritarian regimes.  Bassi’s traumatic, even surreal, experience – “I didn’t know if I was going to be seen again” – is emblematic of countless experiences suffered by civilians caught in the vise grip of regimes using an authoritarian law-and-order approach to quash dissent and protest.  Across the globe, such heavy-handed approaches – indiscriminately targeting civilians who have been stamped by authorities as anarchists, extremists, fringe ideologues, radicals, or terrorists – have been seen, and are continuing to be seen, far too often.

It has been generations, however, since the United States has witnessed such scenes, and in such a scale, on the streets of its cities.  American exceptionalism fed the belief its citizens lived in a dream and most of the rest of the world in a nightmare; only now do many Americans seem to be facing the unglazed realism that they do, in fact, live in a collective nightmare.  In 2020, fault lines of division and exclusion and alienation have escalated to a dangerous degree.  Whether instigated by right-wing or left-wing extremists, the potential for mass violence – be it political, racial, or class in origin – seems closer than ever before.

My previous research, drawn from a broad range of multidisciplinary analyses, evaluated the mostly widely utilized early warning systems for mass violence. From that comprehensive review, the most well-supported (quantitatively and/or qualitatively) risk factors were distilled and grouped into risk categories related to (1) how authority in a country is exercised through governance, (2) the interpretation and remembering of conflict history, (3) a country’s susceptibility to social disharmony, isolation, and fragmentation, and (4) economic conditions.  The comprehensive and data-driven risk factors in these categories are cross-cutting and intersecting issues, not easily confined to one discrete category.  Taken together, however, and placed in the broader context of real-time accelerants and possible triggering events, they offer a robust and reliable picture of a society’s susceptibility to mass violence.

The “black swan” metaphor, in this case the notion that mass violence is unpredictable and comes as a surprise, is demonstrably false.  Comparative research clearly demonstrates the risk of mass violence is not unforeseeable nor is it only visible in hindsight.  The better metaphor, strategist Michele Wucker argues, is the “gray rhino.”  She writes:

“The gray rhino is the massive two-ton thing with its horn pointed at you, stomping the ground and getting ready to charge – and, most important, giving you the chance to act.”

If attention is paid, risk and vulnerabilities can be analyzed and weighed.  And, fortunately, comparative research also provides insight into the chances to act on that risk and vulnerability – the mitigating points of resiliency that can head off the risk in front of us and help inoculate against the occurrence of mass violence.

As described in a November 2020 research piece I wrote for the Stanley Center for Peace and Security, the longer-term structural risk factors related to governance, memory, social fragmentation, and economic conditions – along with the real-time accelerants and possible triggering events – indicate an escalating likelihood of an outbreak of mass violence in the United States.  Whether instigated by right-wing or left-wing extremists, the most likely flashpoints center around the electoral period and run until inauguration day.

The risk trends are, however, severe, and deep-seated, enough to leave much longer-term concern.  If left unaddressed, they will continue to undermine the structural integrity and stability of American society and potentially drag this deeply divided society into the abyss of mass violence.  Were risk analysts noticing these same trends anywhere else in the world, the approaching storm would be clear and alarms would be raised by a range of international governmental and non-governmental voices.  While the US is not a failed or failing state, it is a fragile and flailing one; closer to breakdown than a breakthrough.  The risk of mass violence is progressively accumulating in a rising tide and resilience is rapidly receding.

Mass violence is a human problem and, as such, offers hope for a human solution.  There is no inevitability in human affairs.  Every country has the capacity for possibility; every story the room for a better ending.  For the United States to find its way to that better ending will require an adaptive resiliency in response to a climate of escalating risk.

There is a mountain of hard work to be done to restore trust in American’s democratic institutions, develop more inclusive narratives of memory, rebuild social cohesion, and nurture economic inclusivity.

Trump and the cyclical nature of US-Russian relations