If I were Jack: Relationships and Sexuality Education in Irish-medium Schools

Addressing the needs of Relationships and Sexuality Education in Irish-medium schools using the "If I Were Jack" resource as a pilot study. A special report by Dr Theresa McShane and Professor Maria Lohan from Queen's University and Liam Dempsey on behalf of An Chomhairle Um Oideachais Gaeltachta agus Gaelscolaíochta. 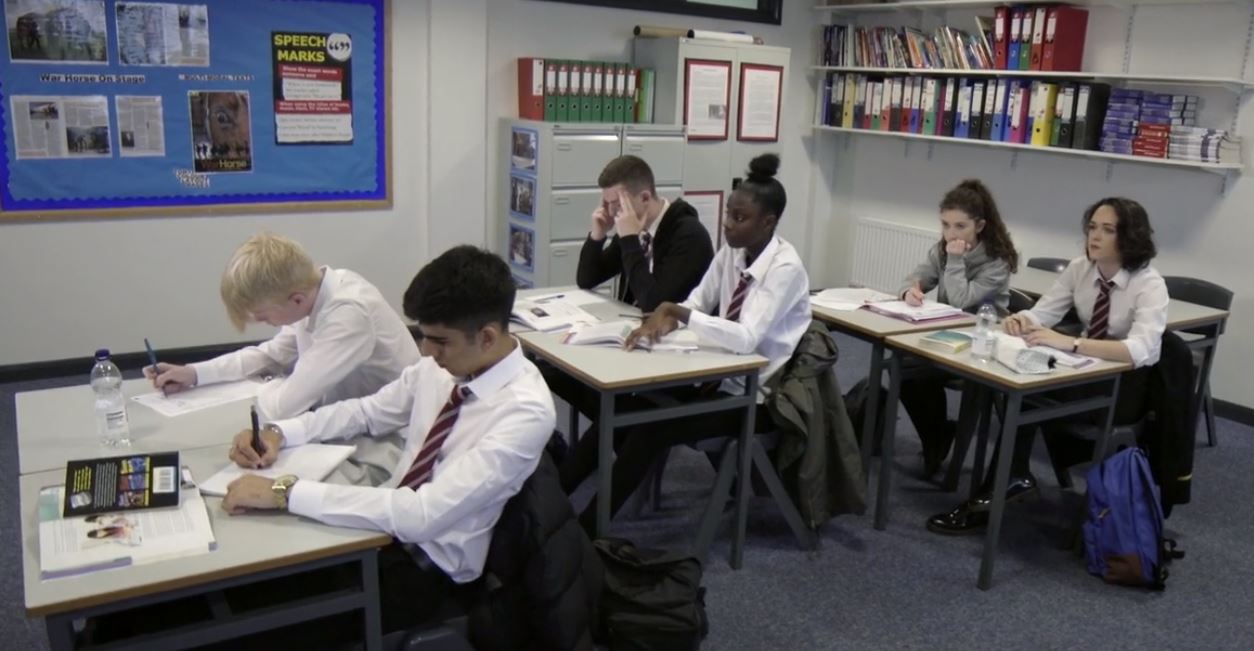 Despite the fact that Relationships and Sexuality Education (RSE) is mandatory on the island of Ireland (in both Northern Ireland and the Republic of Ireland),  it is viewed as inadequate by pupils, teachers and parents. This is partly due to variations in interpretations of the curricula in both jurisdictions and partly due to unmet need for quality, evidence-based RSE resources and teacher training. RSE can also face competition among other subjects in which schools may feel pressured to meet graded output measures. Resources are more likely to be channeled away from RSE towards subjects where pupil and school performance is assessed through formal examinations.

In Irish-medium schools the dearth of high-quality resources is even greater, leaving pupils in this sector at a further disadvantage compared to their English-medium peers.

Teachers in Gaelscoileanna spend a disproportionate amount of time translating and adapting resources from English to Irish to meet the needs of their pupils so that they can develop language for life skills and relationships as well as the core knowledge and skills embedded in relationship and sexuality education.

Researchers at Queen’s University Belfast (QUB), in partnership with An Chomhairle Um Oideachais Gaeltachta agus Gaelscolaíochta (COGG), an organisation responsible for supporting Irish-medium and Gaeltacht education in the Republic of Ireland, conducted a pilot study in 2019/20 investigating the transferability to Irish-medium settings, of the If I Were Jack RSE resource about preventing unintended teenage pregnancy and promoting positive sexual health. 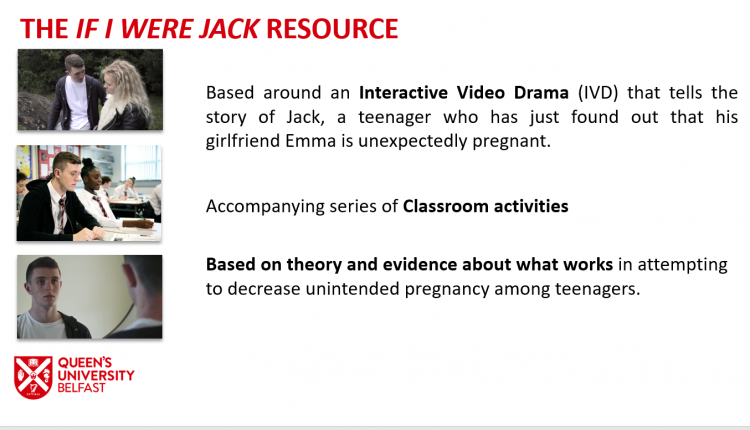 As part of our research in 2019/20, the original classroom activities from If I Were Jack were customised and translated for use in two Irish-medium post-primary schools in Belfast and Monaghan.  While pupils watched the interactive video drama (IVD) of Jack and Emma’s story in English, the translated accompanying classroom activities provided opportunities for learning and discussion through the medium of Irish.

These lessons encouraged students to imagine an unintended pregnancy in their lives and discuss what this would mean for them. The activities were designed to promote the development of skills and knowledge required for preventing unintended pregnancy and the promotion of positive sexual health and relationships.  Pupils were also signposted to the various sources of support they could access both in preventing and coping with unintended pregnancy. Intrinsic to the programme, was the promotion of healthy intimate relationships and discussion around some of the myths and stereotypes associated with gender roles. The classroom activities allowed teachers to target key language learning objectives in RSE and encourage the use of the appropriate terminology in the subject.

Pupils completed knowledge assessments before and after receiving the intervention to determine language acquisition of Irish language terminology required for life and relationships. Researchers observed lessons for engagement with the material and RSE knowledge outcomes. They also conducted focus groups and semi-structured interviews with pupils, teachers and parents to ascertain acceptability of If I Were Jack, and interest in a full Irish-medium adaptation of the resource. 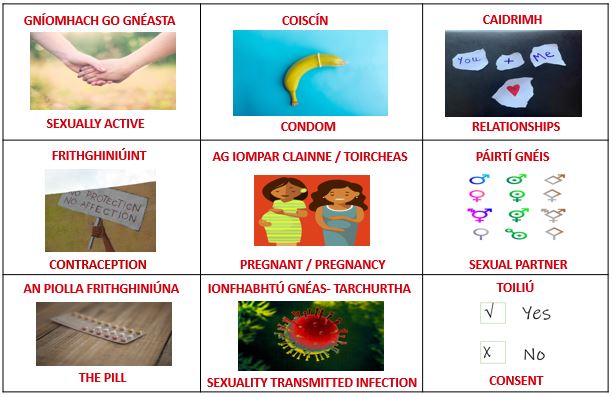 The mean pupil score in the knowledge assessment before receiving the intervention was 32%, rising to 71% after teachers delivered the programme, indicating significant language acquisition for life and relationships as a result of taking part.

Pupils and teachers commented that they found the programme enjoyable and engaging, and that they welcomed the opportunities to discuss relationships and sexuality education through the medium of Irish. Pupils said they found the programme extremely interesting and engaging and afterwards remarked on how they felt their competency to converse in Irish in this topic had greatly improved.

I think I did much better [in the language knowledge questionnaire] at the end because we were talking about it all day. Like, I did really badly at the start because I hardly had any of the terminology in Irish at the start (Pupil).

The best thing I learned was all the terminology in Irish. We already knew words for contraception and abortion and stuff in English but we didn’t know it in Irish.  So we couldn’t talk about it in school in Irish with our teachers or anything because we didn’t know it (Pupil).

Teachers reported that the resource and teaching programme addressed a significant gap in curriculum provision, praising the intervention for its linguistic accessibility.  They were also impressed with how the resource complemented wider programmes of study, opening doors between active learning pedagogies and other subjects such as science to reinforce learning.

The key words are cross-curricular. It makes sense to follow it on through. Need to have their Irish strengthened, language acquisition (Teacher).

More widely, having RSE resources available in Irish, according to teachers, is crucial for the development of young people’s confidence to communicate about sex and other potentially sensitive or emotive topics in Irish.

They are already familiar with some of the terms used in this resource because they use them in Biology and the resource strengthens their language development further. But importantly, where it adds in terms of language acquisition is in regard to the confidence and ability to talk fluently and confidently with their peers and teachers about their emotions around issues such as peer pressure and issues of morality. Debating skills around challenging stereotypes, sensitive issues and taboo subjects are all increased in Gaeilge (Teacher).

Teachers further welcomed the ready-made classroom activities package as a valuable ‘ready-to-use’ resource, as they reported regularly spending a minimum of 20% of their time adapting English-medium resources for suitability for their pupils. That is equivalent to one day in every school week spent mostly on translation.

[Regarding] health and social care, the only thing I have to go off is the CCEA e-guides and fact files. I’m translating them into Irish because they don’t come in Irish. So I would spend a long time just making resources … two or three afternoons every week after the kids leave (Teacher).

At the minute we are teaching PAL, which is Preparation for Adult Life. There aren’t really any resources … it’s all in English … You would really need a few weeks of no other work to sit down and make the resources for the units. There’s 13 units in total (Teacher).

Teachers also reported that across the curriculum, they receive only 10% of teaching resources in the medium of Irish, ready for delivery in the classroom, placing them at a serious disadvantage compared to their peers in other schools.

The amount of time you spend creating resources based off English resources to make them tailor made for our school is unbelievable.  It’s a problem that English-medium teachers don’t have because, for them, the resources are there and it’s just a matter of photocopying them. They don’t have to translate … and this is never thought of whenever new resources are being created or developed (Teacher).

Pupils, teachers and parents called for the need for further development of the If I Were Jack resource to include a full remake of the interactive film in Irish-medium to include young actors who look and sound like themselves. The IVD is the major gateway piece to the resource and learning outcomes. Both teachers and pupils found that having this core element in the English language reduced its effectiveness.

Yeah, it would have been better if it (IVD) was in Irish too because we were asking our teacher afterwards what the terms were in Irish (Pupil).

An Irish-medium version of the video would also allow pupils to have key language modelled in terms of the various emotional responses of the characters when faced with a very sudden life-changing experience.

Pupils’ parents expressed that having a resource such as If I Were Jack available in Irish was an example of how a fairer approach to the Irish-medium sector could be employed.  Framing the need within a broader equality issue, they expressed the necessity for resource provision on a par with other schools, not only to meet educational requirements but also as an illustration to pupils that their learning is as important as that of their peers in all other types of schools.

We want to be equal. We want [the resource] to be in Irish. Our kids need to feel that they are equal to every other school.  So they need to feel like they are entitled to receive every resource in their own language. It’s a human rights issue (Parent).

In summary, whilst the evidence presented from this pilot study is small, it has nevertheless illustrated the dual benefits to subject learning and language acquisition for life and relationships, when resources are provided in young people’s target language. Evidence-based, high quality Irish language RSE resources facilitate acquisition of the necessary life and relationship skills as young people move into young adulthood and beyond, as well as proficiency in the language skills required for confident communication about sensitive and emotive topics with their peers, teachers and families.

If I Were Jack classroom activities, adapted for use in their target language, were regarded by pupils, teachers and parents as a valuable addition to their RSE programmes. To further strengthen and consolidate the impact of the resource in Irish-medium post-primary schools, they recommended the inclusion of a bespoke version of the film with relatable actors who model discussion on key themes in Irish. This would allow for a fuller exploration of this important issue affecting young people in their target language.

In 20/21 it is anticipated that the current resources developed for use in Irish-medium settings will be used along with the English version of the film to deliver the programme to approximately 600 pupils on the island of Ireland. There is potential for this educational innovation to be deepened and widened.

Dr Theresa McShane is a Research Fellow in the School of Psychology at Queen’s University Belfast. Theresa’s research focuses on vulnerable and hard to reach populations using innovative research methods including peer research with young people. She has applied these methods in a diverse range of studies. Research topics include; young men’s sexual health; care leavers with mental health needs and disabilities; fathers’ parenting; socially vulnerable mothers; cancer caregivers; and people who self-injure.

Liam Dempsey is a Board Member of An Chomhairle Um Oideachais Gaeltachta agus Gaelscolaíochta (COGG). COGG is part of the Irish Government’s drive to preserve and sustain the Irish language and to increase people’s everyday use and knowledge of Irish.

Maria Lohan is a Professor of Social Science and Health and a Fellow of the Centre for Evidence and Social Innovation (CESI) at Queen’s University Belfast. Maria’s research focusses on men’s health and especially engaging men and boys in sexual and reproductive health and rights. All correspondence to M.Lohan@qub.ac.uk

The featured illustrations in the visual above have all been used courtesy of a Creative Commons license.

Dr Theresa McShane is a Research Fellow in the School of Psychology at Queen's University Belfast. Theresa's research is varied and focuses on vulnerable and hard to reach populations using innovative research methods including peer research with young people. She has applied these methods in a diverse range of studies. Research topics include; young men's sexual health; care leavers with mental health needs and disabilities; fathers' parenting; socially vulnerable mothers; cancer caregivers; and people who self-injure.

Engaging with Complexity: the Common Purpose Framework for the Prevention of Youth Violence and Criminal Exploitation