Improvements in the representation of women in the new Parliament?

Women’s representation in the UK Parliament is moving upwards, but does this tell the whole story? Professor Yvonne Galligan examines the fallout from the 2015 Westminster election. 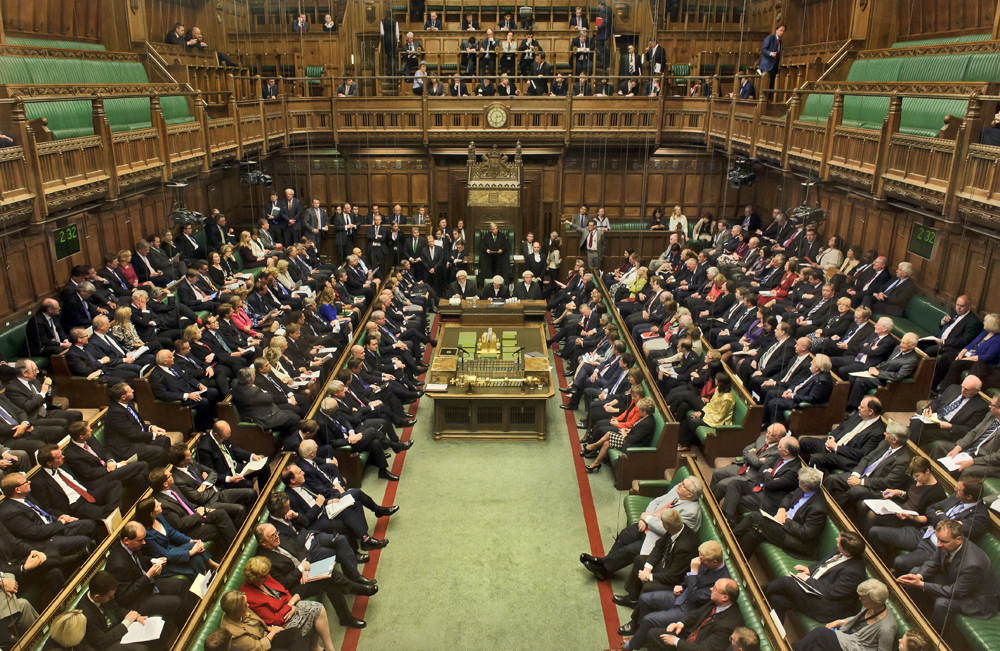 At last, women’s representation in Britain is moving upwards. The 2015 general election returned 191 women, accounting for 29% of MPs. The last significant advance in women’s representation was in 1997, with the election of 101 women MPs for Labour. That step-change brought women’s total seat-holding in the House of Commons from 60 (9%) to 120 (18%).

The 2015 result is of a similar order, bringing the UK more in line with other advanced democracies, where the cultural expectation now is that women will comprise at least 30% of parliament. This is an important threshold to reach. Organisational theory states that when an under-represented group constitutes about a third (or at least 30%) of a group, the decisions of that group change to take account of the interests of the minority. This is the effect of having a ‘critical mass’ of the under-represented group in an institution, board, or organisation.

Parliament has now reached that threshold, just about. It is to be expected that women’s issue priorities will be given more attention than heretofore. Nonetheless, it is not that straightforward. Parliament does not act as a collective, unified body as is the case with other organisations. It is composed of political parties with competing views, interests and supporters. And women’s representation is not evenly distributed among these parties.

How do the parties measure up?

Among the Conservatives 331 MPs are 68 (21%) women, up from 47 in 2010. Being a one-fifth minority means that the collective representation of women’s perspectives on the political issues of the day is not likely to impact on the interpretation of these issues by the overwhelmingly male parliamentary party. It will be left to strong individual women to put forward views and interests that run counter to, or are simply not included, in the Conservative world view.

Labour has done well to increase the number of women MPs from 87 to 99 (43%), on a reduced overall take of seats. Here we find another significant threshold passed, the 40% mark. Organisational theory tells us that when a minority group obtains a 40% or more presence in any given body, the group dynamics become more balanced. In the study of political representation, this is known as the threshold required for gender balance. Basically it means that in groups with a 40:60 gender ratio (either as women:men or as men:women) the views and interests of both genders are incorporated into group decision-making. Neither is a minority.

In the upcoming leadership election it will be interesting to see how many women put their names forward for the position. Already one woman has declared: Liz Kendall, MP for Leicester West, who is arguing for a “fundamentally new approach”. It is likely that other women will also enter the fray. This is what happens when women feel that they are an integral part of party politics – they are ready and willing to offer themselves for leadership and other frontline positions.

Expect, too, that Labour will speak more forcefully on issues that have had a major impact on women’s lives in Britain today – economic austerity, childcare cutbacks, the gender pay gap, cuts in the NHS and other public sectors, the quality of healthcare and social services.

Percentage of male and female MPs in the new UK Parliament: 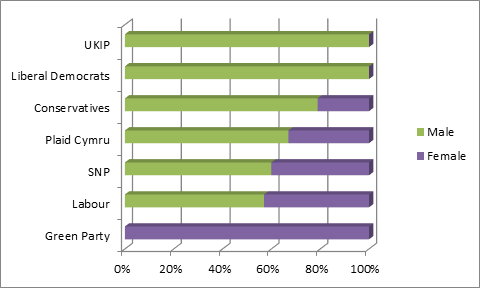 The big story of the election is the Scottish National Party’s unprecedented success in winning 56 of the 59 Scottish MP seats. The vote surge in SNP support brought 20 (36%) women into the House of Commons. One newcomer, Mhairi Black, at 20 years of age is the youngest politician elected to parliament in Britain since 1667. With a charismatic female party leader in Nicola Sturgeon, a ‘critical mass’ of women MPs and a focus on combating austerity, it is likely that the SNP will pay attention to the gendered impact of public policy decisions emanating from Westminster. The remaining 3 Scottish seats were held by male MPs from the Conservatives, Liberal Democrats and Labour.

Wales increased by one the number of women it is sending to the House of Commons following the election. Of the 40 seats it has in Parliament, 9 (23%) are now held by women. Women won 8 (32%) of the 25 Labour seats, and Liz Saville-Roberts became one of the three Plaid Cymru MPs returned to Parliament. The Conservatives returned an 11-strong all-male Welsh team to Parliament. This record suggests that the Conservative Party is deeply ‘conservative’ in Wales, with much to do to encourage and support women’s aspirations for political office.

In Northern Ireland, women’s representation did not fare well. It lost two of its four women MPs. Naomi Long (Alliance) in East Belfast and Michelle Gildernew (Sinn Fein) in Fermanagh-South Tyrone lost respectively to the Democratic Unionist Party’s Gavin Robinson, and the Ulster Unionist Party’s Tom Elliott. The unionist parties joined forces in these constituencies to target the seats of the two high-profile incumbents. Women’s representation from Northern Ireland in Westminster is only 11% after this election – the independent MP Sylvia Hermon (North Down) and Margaret Ritchie of the Social Democratic and Labour Party (South Down). Thus, Northern Ireland comes out as the most unequal region when it comes to women’s representation.

The overall result, then, is a mixed bag. Advances on the representation of women are a welcome sign that democracy is becoming more responsive to the electorate. Yet Parliament remains disproportionately male. The campaign for a 50:50 parliament, prominent during the election period, looks set to continue. Parties, too, must continue to address gender inequalities in representation as this Parliament gets underway. Initiatives such as the Women in Public Life campaign in Wales, and implementation of the recommendations in the NI Assembly report on Women in Politics would help. It may, however, take the electoral challenge of a women’s equality party to nudge the next Westminster elections towards a gender-equal Parliament.

Professor Yvonne Galligan is Director of the Centre for the Advancement of Women in Politics, Director of Queen’s Gender initiative and Head of the School of History, Anthropology, Philosophy and Politics at Queen’s University Belfast.