Kathmandu locals are fighting ‘injustice’ to save their city’s heritage, years after deadly earthquake

Dr Urmi Sengupta looks at how the rebuilding of Kathmandu in Nepal has been progressing, following the devastating earthquakes in 2015. 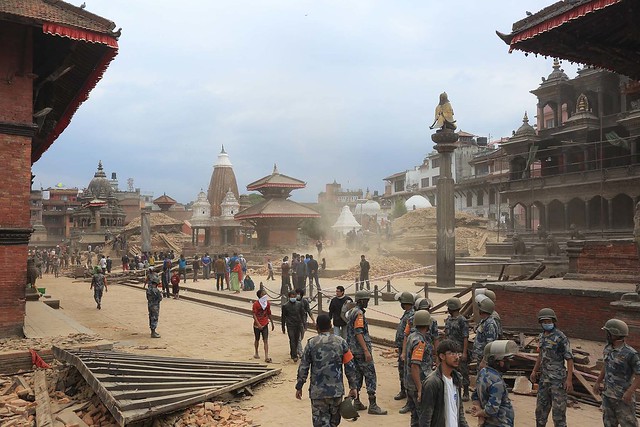 Four years ago, vast swaths of Nepal’s capital, Kathmandu, turned to rubble in a matter of minutes. The magnitude 7.8 earthquake, which wrought destruction on the city, was followed by hundreds of aftershocks. Just 17 days later, another magnitude 7.3 temblor felled more buildings and structures, which had stood through the first quake.

The human toll was catastrophic: across Nepal, 9,000 people died and hundreds of thousands more were left destitute, facing extreme poverty. The damage to Nepalese culture was also significant: hundreds of historic buildings, shrines and statues across the capital were reduced to dust.

Four years and hundreds of millions of dollars in donations later, Nepal is slowly recovering. Inevitably, though, a catastrophe of this scale has caused issues for the nation’s resource-starved government. Researchers have highlighted that political squabbling and a lack of local or regional governance have slowed reconstruction.

Dr Urmi Sengupta is a Lecturer in School of Natural and Built Environment at Queen's University Belfast . Urmi has an interdisciplinary background and scholarship in architecture, planning and housing studies, combining qualitative, quantitative and ethnographic methodologies.