Nuon Chea was appealing convictions for crimes against humanity and genocide when he died. Dr Rachel Killean and Dr Peter Manning, of the University of Bath, discuss whether his conviction stands, and the implication this has for justice in Cambodia. 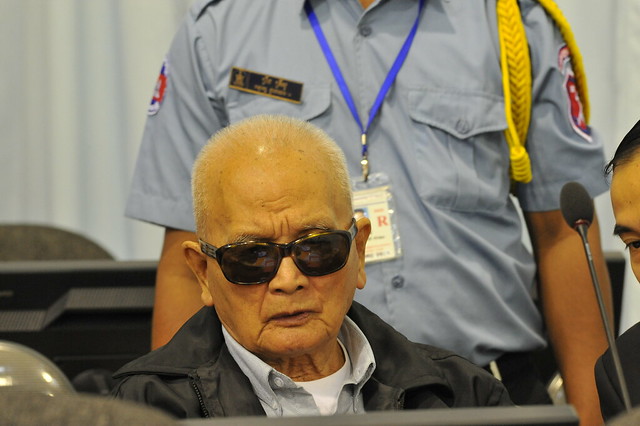 Nuon Chea, Pol Pot’s second-in-command in Cambodia’s Khmer Rouge, died on August 4 aged 93. Following Pol Pot’s death in 1998, he was the most senior surviving member of the genocidal regime that ruled over what was then known as Democratic Kampuchea.

The Khmer Rouge was a violent communist group that held power in Cambodia between 1975 and 1979. It aimed to turn the country into an agrarian utopia, declaring “Year Zero”, abolishing private property and driving millions from towns and cities before putting them to work on the land. An estimated 1.7m people died through starvation, disease, overwork and deliberate extermination.

In 2007, following years of negotiations between the Cambodian government and the United Nations, the Extraordinary Chambers in the Courts of Cambodia (ECCC) was established. The Court was tasked with prosecuting “senior leaders” and “those most responsible” for crimes committed during the regime’s rule of Cambodia.

Nuon Chea was one of five individuals put on trial by the ECCC for crimes committed during this period. In 2011, Kang Kek Iew, known as “Duch”, the former chairman of the Khmer Rouge’s most notorious security centre S-21, was found guilty of crimes against humanity; he is currently serving his life sentence.

Concerns over the ages of the remaining accused led the ECCC to split Nuon Chea and Khieu Samphan’s case into sub-trials. On August 7, 2014, Nuon Chea and Khieu Samphan were found guilty and sentenced to life imprisonment for crimes against humanity. On November 16, 2018, both were also found guilty of crimes against humanity, war crimes, and the genocide of the ethnic-Vietnamese. Nuon Chea was additionally found guilty of genocide against the Cham Islamic minority in Cambodia.

But Nuon Chea appealed his conviction in July this year – and the appeal was ongoing when he died.