Following the recent announcement to close Kilroot power station, Professor John Barry looks at how this is not only disastrous for workers and their families but it's also a major setback for the island's managed transition to a renewable energy economy 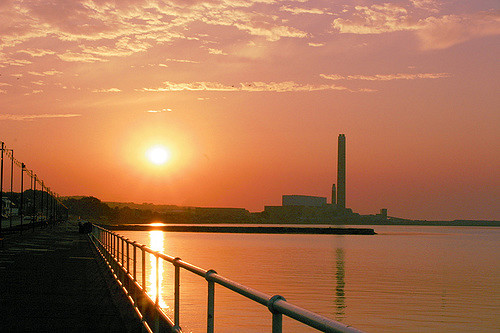 This is not how you plan a transition from a high to a low carbon energy economy.  The announcement last week that the operator of Kilroot coal fired power station had lost out in the auction process within the all island Single Electricity Market (I-SEM), and the company announcing it will close the gates in May is not only a disaster for those workers, contractors and communities affected.  It is also a major setback for the managed transition to a renewable energy economy and also raises serious questions about I-SEM.

The recent auction has not only led to the imminent closure of Kilroot but also Ballylumford (to be closed in December) but there are also energy plant closures in the Republic of Ireland. Energia owner Viridian put workers on notice at one of its two electricity generators at Huntstown, Co Dublin, while ESB confirmed that the older of its two generators at Aghada in Co Cork and its facility at the Marina in Cork city will also close.

In Kilroot, more than 250 jobs are at risk, with AES planning to close the 513MW coal-fired part of Kilroot – (80% of the station’s capacity) – by May (even though there are local political calls that a three year ‘notice to cease’ should and could be given by the company).

Energy transitions are decade long processes that need to be manged, mapped and based on clarity, openness and transparency.  The shift from one energy system to another is not as simply as switching from one fuel or source to another.  One has to include the associated infrastructure that is an integral element of any energy system, from the centralised power stations and long electricity lines to petrol stations that are part and parcel of the current fossil fuel energy system.

As research on energy transitions conducted by myself and other colleagues (Geraint Ellis and Robin Curry) here at Queen’s University shows, the transition to a low carbon, renewable energy economy requires management by the state.  This is important not only for ensuring a ‘just transition’, but also for creating a shared vision amongst all the various energy actors, identifying the most effective policy mechanisms and finally for mapping the energy system as a whole, including those energy actors who might not be supportive of any transition to low carbon economy.

A just transition, a position on the transition to low carbon endorsed by trades unions, environmentalists, faith communities and major energy actors and policy-makers, is about ensuring environmental sustainability as well as decent work, social inclusion and poverty eradication.  Most recently the Paris Climate Agreement of 2015 stated that “the imperative of a just transition of the workforce and the creation of decent work and quality jobs in accordance with nationally defined development priorities” was a non-negotiable element of the inevitable decarbonisation of societies.

While climate change (alongside energy security concerns) requires that we have to retire the fossil fuel energy system, this cannot happen overnight, and requires planning and long-term thinking, not short-term market-based decisions solely or largely around costs.  Mitigating measures need to be put in place to ensure a smooth and a ‘just transition’ from a high to a low carbon economy. The energy transition should not disproportionally impact negatively on communities and workers dependent on oil, coal and gas energy production, and nor should it on consumers (especially those who are in energy poverty).  It is clear that any transition to a low carbon economy requires that the fossil fuel energy system declines over time and then is replaced by a renewable energy system.

What has happened with the closure of Kilroot is the premature retirement of this piece of the fossil (in this case coal) energy mix.  Kilroot, like other coal fired power plants across the UK was due to close in 2025, as   announced by the Department for Business, Energy and Industrial Strategy (BEIS) late last year.   This is in line with other countries such as France which also recently announced the retiring of all coal fired power plants in three years’ time, 2021. But the Kilroot decision could be seen as both short-sighted and an example of an ‘unmanaged and unjust’ energy transition.

There is also the question of the future of the energy storage facility in Kilroot. Given energy storage is a crucial element of the infrastructure needed for low carbon energy future – to ensure renewable/wind can be the baseload – the potential loss of this facility further delays and disadvantages Northern Ireland in making the shift from coal, oil and gas to renewable forms of energy production.

There are also some questions about I-SEM to be answered, not least the lack of transparency from the NI Energy regulator and the System Operator for Northern Ireland/SONI and the equivalent in the Republic, Eirgrid, over the auctioning process. And we cannot discount the difficulties AES faced in the tendering process by the absence of a Northern Ireland executive, a point strongly made by AES UK & Ireland president Ian Luney.

While exaggerated, talk of the Irish government using I-SEM to control/destabilise Northern Ireland as part of its Brexit strategy (as outlined by some commentators and politicians, with Sammy Wilson claiming the decision ‘plays into the hands of Dublin’, there are concerns about the damage this decision has done to the I-SEM. There are questions for the regulator and systems operators around the transparency of the I-SEM auction process so that it does not undermine the single electricity market, and whether it is ‘fit for purpose’ for positively contributing to the decades long energy transition that lies ahead for the island of Ireland.

But more importantly, the Kilroot decision throws into sharp relief how the two governments in both jurisdictions need to have a longer-term plan for the transition of the island’s energy system and economy to a low carbon one.  And this should be a political decision, not simply left to market processes of auctions and short-term cost considerations.  Energy and electricity in particular are strategic and vital resources to the economy and society that require political and long-term management. If not directly nationalising energy, a ‘just energy transition’ to a low carbon economy requires more direct ‘governance’ of that process, with a long-term transition plan to ensure people, communities and workers are not unfairly disadvantaged.

Kilroot may stand as an example of how not to do this, an ‘unjust energy transition’.  If a transition away from coal, oil and gas means job losses, economic disadvantage and threats to the economic security of communities, with no mitigating measures and a transition plan for those communities in place, then people will not unreasonably be sceptical or outright resist such proposals.  Kilroot has not only raised questions about energy security for Northern Ireland, questions about the I-SEM and the regulators, but also made public support for low carbon energy transitions much more difficult.

Rather than part of a managed and planned process of shifting out energy system away from fossil fuels, this decision may succeed in continuing to bolster those who wish to continue our ‘carbon lock-in’.

Global Impact of the US Shale Revolution: here to stay?

No doubt this Northern IrIsh Assembly maDe failure is a Tragedy for some.
However the complete lack of governance and ulster Bank funded Hot bUbble development free for all that led to the 2008 bust needs to be factored in to the Wider picture here.
With the New York based hedge funders Cerberus and BlackrocK effectively % their local friends the DUP, owning all of the very bad northern Irish property and development debt from 2008, the seaside near Belfast ie Kilroot and the -the gateway to the Glens – environs of Ballylumford on islandmagee are, for Men INTERESTED in real returns on their investment, prime property development sites. Once the horrendous polluting eyesores of Kilroot and Ballylumford are finally long gone.
Big Boys Games: Big Boys Rules.