Dr Barry Quinn looks at the challenges facing Northern Ireland's banking industry and the pressures on both business and consumer lending as a result of the recent political instability. 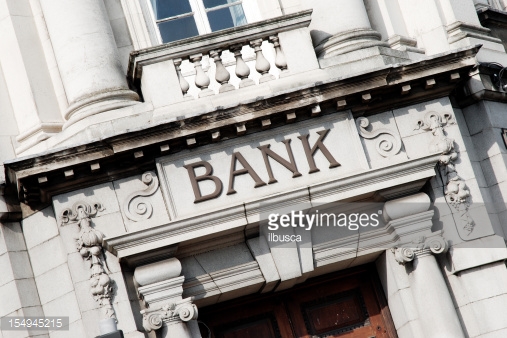 Bank balance sheets in NI are facing some significant challenges as a result of the recent political instability. The impending EU exit and the assembly’s collapse (and subsequent polarised snap election results) due to the mismanagement of the ‘ash for cash’ green energy scheme (RHI) places real pressures on both business and consumer lending. The RHI scandal is likely to put pressure on a depleted small to medium enterprise (SME) lending portfolio adding further financial woes to the farming industry, while the lagged economic fallout of the EU exit may put pressure on debt-fuelled consumer spending.

One way to understand these pressures better is to assess the liquidity risk exposure of NI banks. Specifically, Figure 1 presents an aggregate look at the funding liquidity ratio (borrowings as a proportion of deposits2) of a selection of SME business categories and individuals for the period 2013 Q3 to 2016 Q33. 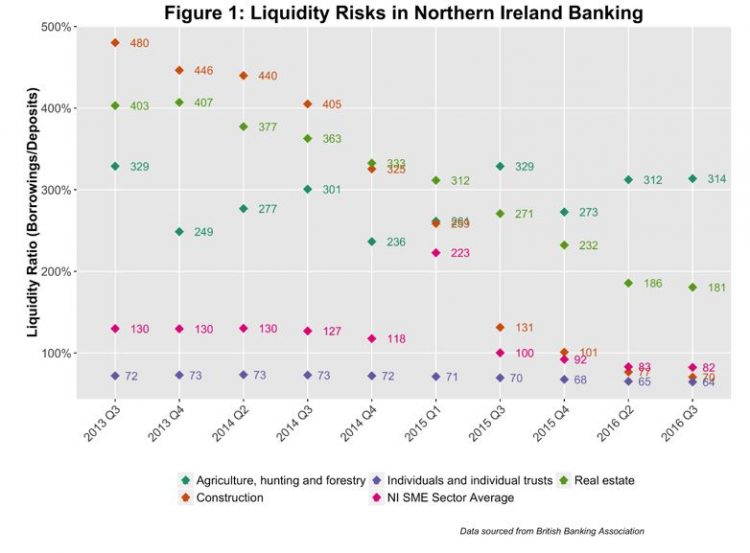 Over the period, lending to individuals averaged around 35% of the total loan book. Figure 2 presents the share of total SME lending by business category. The SME business categories investigated in figure 1 capture over 75% of SME loan book share and can be considered the biggest challenges in terms of liquidity risk management. Finally, for comparison, figure 1 also includes a sector average. 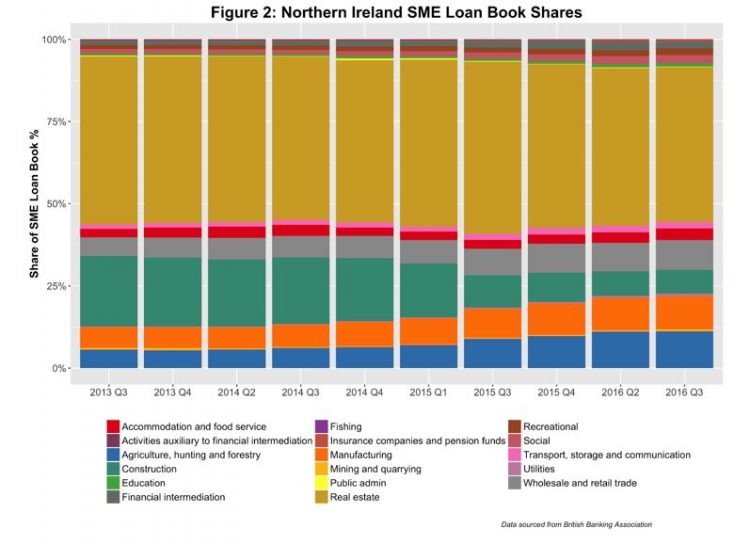 The calculated ratio approximates a bank’s liquidity position, with too high a value suggesting that a bank will not have enough funds available to absorb unforeseen funding shocks, while too low a value suggests profit inefficiencies due to a bank not earning as much as it could from its liquid assets. The data is sourced from the British Banking Association and captures over 95% of the banking business in Northern Ireland.

Some interesting points emerge. The large difference between quarterly SME (orange, light green, and dark green dots) and consumer lending (purple dots) ratios illustrates the stark differences in bank lending practices. SME business lending is secured against a combination of collateral, government backed income and EU subsidies. For example, EU and government backed income is purported to account for some 87% of farming income in NI. The SME sector has seen a reduction in the average funding liquidity ratio over the period, from 138% in 2013 Q3 to 82% in 2016 Q3, which is largely due to a depletion in the loan book size. This depletion has been driven by a deleveraging process in the real estate and construction industries4 due to large non-performing loan write offs and the sale of debt portfolios to investment companies such as New York investment fund Cerberus.

In 2016 Q3, liquidity risk in construction has now fallen below 100% while the real estate business remain well above the sector average at 181%. Agricultural business, while capturing a smaller portion of the SME lending stock (8% average for period), has remained a high liquid risk, well above the average liquidity ratio in every quarter.

This high liquidity risk position of agri-SME lending can be in part explained by the heavily subsidised nature of the industry. That said, a financial crisis in farming is an issue that has been raised a number of years ago when the big four banks were called to Stormont to give evidence. A key concern for this SME category is the ‘ash for cash’ government backed scheme that has likely been used as lending collateral.

In 2013, assurances by the finance department to the banks that the 12% rates of return on these scheme will be ‘grandfathered’ providing certainty regardless of future reviews, likely means that deleveraging in this sectors has been less of a concern to the banks over this period. With these guarantees now likely to be under review in a newly formed Assembly, the high liquidity risk of agri-SME lending may be ossified by increased default risk if promised guarantees are now in doubt.

From a liquidity perspective, lending to individuals is increasingly well covered by more deposits, with the ratio falling from 73% in 2013 Q3 to 64% in 2016 Q3. That said, this may raise some profitability concerns as individual lending makes up a 35% of the bank lending in NI. GB and NI consumers have been largely unaffected by Brexit-induced economic slowdown or inflation pressure as UK consumer credit grow more than 11% in the year to December, an increase not seen since 2005 according to the Bank of England figures.

Banks in Northern Ireland, as in the rest of the UK, should be weary of such debt-fueled consumption as unsecured personal debt has historically made up 90% of the household loan losses in the UK. Mark Carney has cautioned on this type of debt-driven demand becoming more sensitive to income and employment levels. Another key concern is that UK households are saving at record low levels with saving rates as a proportion of disposable income dropping to 5% (20 year low). While employment levels are at their highest since records began in Northern Ireland, 70% according to the Department of the Economy, the real wage rate in NI has been falling steadily since 2009.

In summary, political uncertainty has some clear liquidity risk management challenges for NI bank balance sheets. While a large deleveraging process in construction and real estate has significantly lowered liquidity risk in SME lending, this is likely to squeeze profitability in these areas. More importantly, the lending to the farming industry will require careful risk recalibration as RHI scheme guarantees may prove illusory after a review. Perhaps more encouraging is the well covered individual lending portfolio which is 35% of the total loan book. This low liquidity risk may also be a challenge for bank profitability as they struggle to on-lending some of these highly liquid deposits assets.

Barry Quinn is a lecturer in the Management School at Queen's University Belfast. His research interests include; Banking and Financial Cooperatives; Financial Regulation; Efficiency and Productivity Analysis; and Applied Econometrics.