Negotiating a settlement in Northern Ireland, 1969-2019

In their new book, Professor Jennifer Todd and Professor John Coakley trace the roots and outworkings of the Good Friday Agreement, focussing on the British and Irish governments, their changing policy paradigms and their extended negotiations from the Sunningdale conference of 1973 to the St Andrews Agreement of 2006. 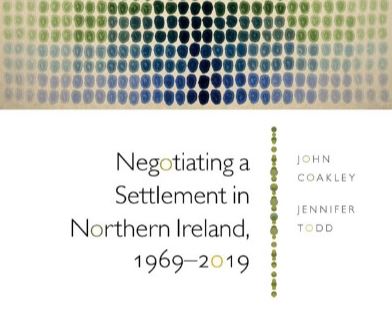 The 2020 Irish election rivalled the 2019 UK election in its serious implications for Northern Ireland. Against a backdrop of the pursuit of Brexit within the UK and the rise of Sinn Féin in the Republic, the new Irish coalition adopted a policy programme promising a range of modest cross-border measures, both North-South and East-West, and proposes setting up a unit in the Taoiseach’s department ‘to work towards a consensus on a shared island’.

There is a hint of déjà vu about this proposal. The Lynch government established an ‘Inter-Departmental Unit on the North of Ireland’ back in 1970, and specialist units appeared shortly thereafter in two departments: the Northern Ireland Division in the Taoiseach’s department, and the Anglo-Irish Division within Foreign Affairs. These have survived, in greatly altered form, to the present.

The institutional transformation of Northern Ireland politics, and the twists and turns of the relationships between North and South and between the UK and Ireland, make up a fascinating story. Extending over more than half a century, they were driven by a steady if unevenly-paced pattern of intense negotiations between politicians and senior officials. We tell this story in our book Negotiating a settlement in Northern Ireland, 1969-2019 (Oxford University Press, 2020).

Our approach is to build the narrative around the words of the main actors, as recorded in witness seminars and interviews. We supplement this by extensive reproduction of documents such as successive drafts of agreements. We set this original material in context through sections and chapters that analyse the long process of change.

The analysis takes in the landmark agreements that have built on each other over the decades, from the Sunningdale Agreement of 1973 to the St Andrews Agreement of 2006. We draw two types of conclusion about these: about the issues or principles at stake, and about the modalities of change.

Three recurrent themes dominated the processes of negotiation and implementation: the principles of sovereignty, democracy and equality. Notwithstanding enormous progress, these remain incompletely resolved, and constitute a profound challenge—all the greater because of the steady erosion of British-Irish consensus over the past decade.

First, evolving conceptions of sovereignty and self-determination allowed a squaring of the circle of constitutional conflict. Since the Belfast/Good Friday Agreement of 1998, Northern Ireland’s status as part of the United Kingdom is to be determined by the people of Northern Ireland, with the people of the Republic having a veto on unity. The Irish state, and the main nationalist parties, accepted the constitutional status quo, while the British and unionists agreed that this could change should a majority so wish.

But the agreement left some unanswered questions which resurfaced later. Did the UK really accept that its sovereign position in Northern Ireland would now be constrained by the 1998 agreement? How strong a voice would be given to the Irish government? These questions acquired increased salience as the Brexit process highlighted the demand for unconstrained British sovereignty.

Second, a carefully negotiated mode of democratic governance won widespread acceptance. The unsuitability of majoritarian democracy in a divided society was accepted by British and Irish governments at an early stage, but designing an appropriate mode of power-sharing took decades and involved a change of policy paradigm – incorporating republicans and loyalists rather than focussing on agreement among the centrist parties, and involving tortuous negotiations over mechanisms to protect the vital interests of the parties to the conflict.

Agreeing to the principle of power-sharing, however, is only part of the story; there were formidable difficulties of implementation. Collective policy making was impeded by inter-party rivalry, and unresolved problems accumulated. The unspoken assumption of relative stability in British-Irish relations, and in relationships with the EU, acted as a foundation for the devolved institutions. But as these were destabilized by Brexit, the viability of power-sharing arrangements and the adequacy of governing processes returned to the political agenda.

Third, the principle of equality lay behind many of the changes in the past five decades. Longstanding grievances over inequality, discrimination and human rights were steadily remedied, first at the formal level, and then substantively, thanks to a reform programme driven by the British government from 1989 onwards. Widespread acceptance of the legitimacy of nationalist aims and of the public expression of Irish culture and symbols followed steadily.

Notwithstanding this progress, though, the proposed bill of rights for Northern Ireland was never adopted – an important gap, since this could have defined the principle of ‘parity of esteem’ and could have prevented backsliding on key aspects of the agreement, important considerations in the context of the Brexit challenge. Unionists, furthermore, continued to resist full cultural equality between nationalism and unionism.

One theme cuts across the main dimensions of conflict. This was the willingness and capacity of the British state to undertake an incremental reshaping of political and social relations in Northern Ireland. From the mid-1980s until about 2010, successive British governments appeared willing to take on this task, progressively allowing Irish ideas to gain some leverage, and the Irish government to play a significant role, serving at once as ‘unpaid advisors on nationalist sensitivities’ and as co-managers with the British.

The prospects for incremental change seemed, however, to diminish in the 2010s. This arose not from the incapacity of British governments, but from their reluctance to be bound by past agreements, vividly illustrated in the several waves of Brexit negotiations.

Several useful lessons may be drawn from these processes of long-term change.

First, the pattern of inter-governmental talks over the decades reveals the inner workings of the negotiating process. The British, as the stronger partner, often waited until their own strategies were exhausted before calling on the Irish. The Irish, as the weaker partner, constantly put down markers which might be of use later when windows opened. Such windows of convergence between governments did arise from time to time, and permitted often productive negotiations when, as in the crucial period of the 1990s, Irish policy paradigms came to inform British-Irish strategy. It may be some years before such windows reopen.

Second, until the 2010s there was a steady convergence in the vital interests of the two states. For half a century, the key Irish interest was peace and stability on the island, and this increasingly became the main British interest too. However, with the growing salience of Brexit, British commitment to ‘sovereignty’ may clash with the principles underlying the Belfast/Good Friday Agreement. Constraints by guarantors in the EU and the USA are necessary, but dangerous: they may induce minimal compliance rather than encouraging intervention sufficiently vigorous to make for peaceful and successful constitutional renewal.

As the Brexit debate extended the political agenda to include Irish unity once again, narrower Irish interests – in stability in the 26 counties – may be disrupted by emerging tensions in Northern Ireland. The Irish government, thrust into a more significant international role by the forces of Brexit, will also have to reflect upon the measures needed to preserve peace and stability on the island. The policy paradigms of the past will need to be reassessed.

Jennifer Todd MRIA was Full Professor in the School of Politics and International Relations at University College Dublin (UCD) until 2018, and is presently Research Director, Institute for British Irish Studies, UCD, and a Fellow at the Geary Institute for Public Policy at UCD.

John Coakley MRIA is a Professor in the School of History, Anthropology, Philosophy and Politics, and a fellow of the Senator George J. Mitchell Institute for Global Peace, Security, and Justice in Queen’s University Belfast. John is also a Fellow at the Geary Institute at UCD.