Dr Gladys Ganiel from the Senator George J. Mitchell Institute for Global Peace, Security and Justice reports on a recent event which looked at radicalisation and religious freedom on campus and in the community. 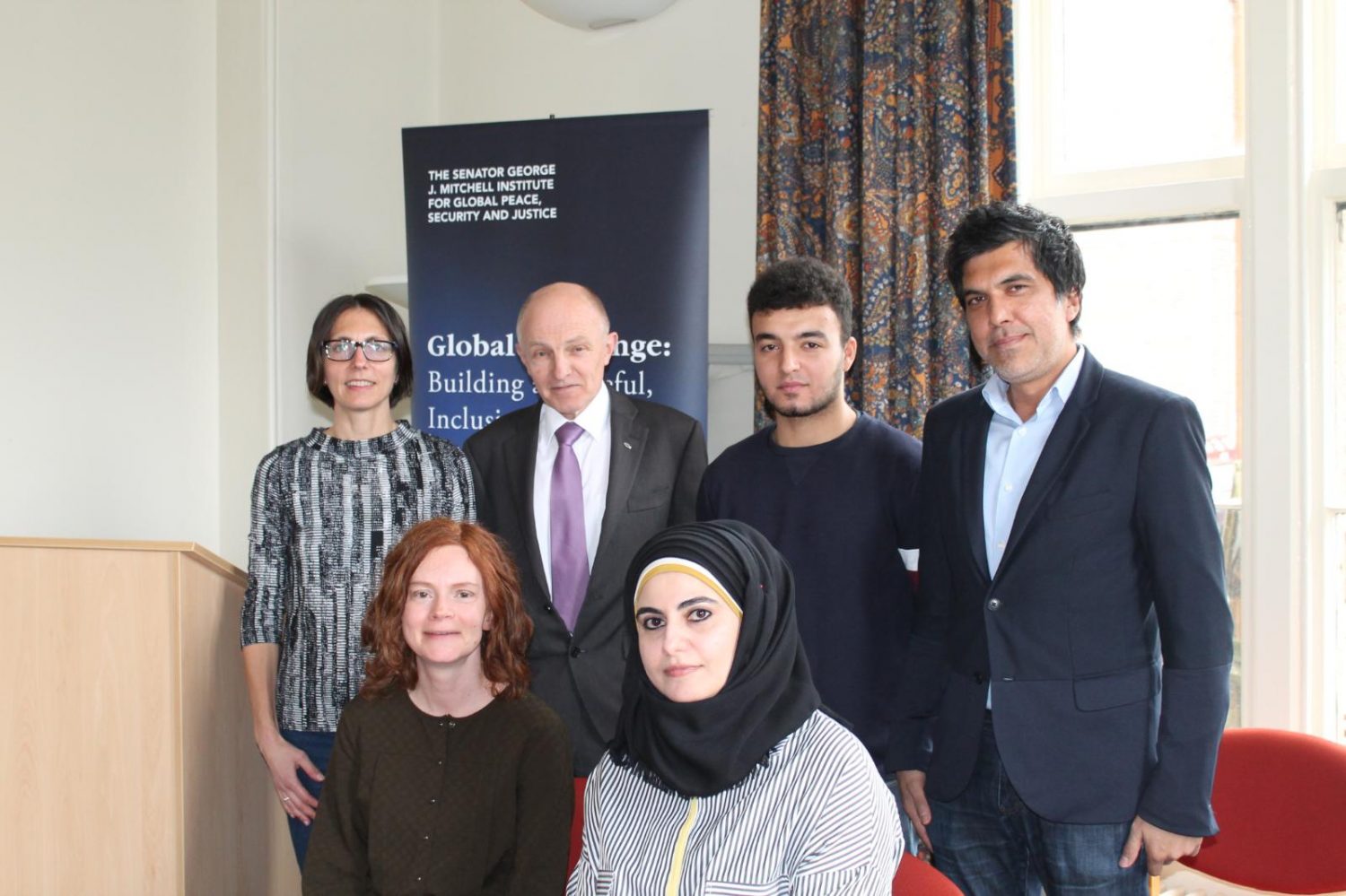 The Senator George J Mitchell Institute for Global Peace, Security and Justice’s Spring Festival of Conflict Transformation opened on 26 April with a panel discussion on ‘Radicalisation and Religious Freedom on Campus and in the Community.’

The idea for the event was sparked by the publication of a new book, Religion and Higher Education in Europe and North America, co-edited by Kristin Aune from Coventry University and Jacqueline Stevenson from Sheffield Hallam University. Aune, Senior Research Fellow at the Centre for Trust, Peace and Social Relations, Coventry University, was one of the speakers featured on the panel. The panel was chaired by Dr Gladys Ganiel from the Mitchell Institute.

The book raises a number of questions, including questions about how religious minorities are treated on campus, the extent to which Government pressures universities to monitor religion (almost always assuming that religion is a source of radicalisation), and how religious students themselves experience the so-called secular university.

The panel picked up on those themes, extending them to think about these issues more broadly in Northern Ireland and the UK.

The panel included two Muslim students – Thelfa Ahmad and Moustafa Faheem – who described Queen’s and Northern Ireland as having been generally welcoming to them. They also recounted Muslim students’ efforts to have a designated ‘quiet room’ for prayer at Queen’s which was reported by the BBC and Guardian in 2015.

Two quiet rooms have recently been designated at the university. The rooms are not allowed to include religious symbols.

Dr Michael Wardlow, Chief Commissioner for the Equality Commission for Northern Ireland, set the scene by identifying key issues related to radicalisation and religious freedom in Northern Ireland, encompassing all religions. Wardlow said that defining and identifying radicalisation is problematic, arguing that in Northern Ireland ‘exclusion and inequality’ are the largest obstacles to good relations. He said that people from minority groups (religious or otherwise) are not clear what their protections are under the law, and lamented that

in Northern Ireland we live separate parallel lives. ARK surveys show that 48 percent of people have never met a Muslim and 28 percent only have rare contact with Muslims. We are religiously illiterate of [religions other than Christianity].’

Dr Zaheer Kazmi, Senior Research Fellow at the Mitchell Institute, provided a perspective on the wider UK context with an analysis of the Government’s ‘Prevent’ strategy. He noted that as the strategy has expanded in recent years, the distinction between terrorism and non-violent extremism has been blurred. Furthermore, Government has increasingly called on the public to implement ‘Prevent,’ expecting citizens to monitor one another. He argued that the premise of ‘Prevent’ seems to be that ideology alone causes terrorism, without regard for other factors such as social exclusion or poverty.

Dr Kristin Aune then presented research on the role of universities in monitoring religious fundamentalism and freedom of speech on campus, drawing on her new co-edited book. She said that universities are negotiating the tensions between protecting students from extremism, while at the same time trying to protect religious freedom. She argued that ‘Prevent’ has distracted universities from their duty to protect religious freedom and reported that 1/5 of Jewish and Muslim students in England have reported discrimination and harassment. Aune then identified three problems and three solutions.

Two Queen’s students then provided perspectives on what it’s like to be a Muslim on campus in Queen’s and in the wider Northern Ireland community.

Mrs Thelfa Ahmad, a student in Electrical Engineering at Queen’s University, shared her experiences of living in Belfast for twenty years since leaving Iraq. Ahmad said that she would speak from the heart, and related how her Christian neighbours in Northern Ireland are ‘like my family.’ During the 2003 Iraq war, she described how she was alone in her house during the day crying, but ‘a neighbour came to my door to support me. I can’t forget these things.’

Ahmad, who is now in her final year of her PhD, noted that in previous years there was no quiet room where Muslims could pray on campus. Since then, quiet rooms have been provided in the computer science building and the Students’ Union.

The last panellist to speak was Mr Moustafa Faheem, President of the Queen’s University Islamic Society. He is a Computer Science student, originally from Egypt, who has been living in Northern Ireland for eight years. Faheem emphasised that it is a fundamental practice in Islam to engage with other communities, and that it is the role of a university Islamic Society to provide a voice for Muslims on campus and to cater for their needs. He described how the Islamic Society had organised a ‘Discover Islam’ week with events every day in the Students’ Union, so that non-Muslims could meet practising Muslims in a friendly and relaxed setting. They also organised a ‘Believe and Do Good Week’ where they served the homeless community.

During the discussion with the audience, Ahmad recounted how when the quiet rooms first appeared on campus, she would enter and start to pray, surprising non-Muslim students who had wandered in for a quiet cup of tea. Perhaps if Muslim prayer at Queen’s no longer seems quite so surprising, that is at least one small step towards greater religious literacy.

‘Law and Justice’? Poland’s (re)turn to Catholic Morality and a Homogenous Society