Competing with the Past: The Struggle for Truth in Northern Ireland 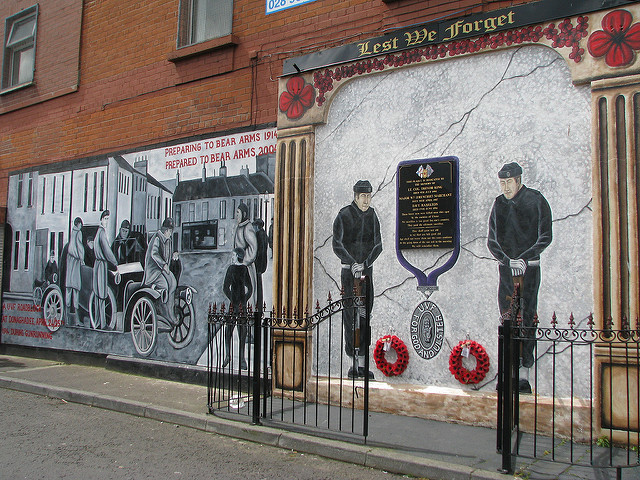 It is hard, if not impossible, to take more than a passing interest in Northern Ireland to realize that the legacy of the conflict is still very much in the present. A quick Google search pulls up the following three headlines from local newspapers – ‘Tories and unionists need to stand firm and reject anti-state Troubles probes imbalance’, ‘Legacy of the past: Victims campaigners protest at Stormont’, ‘Collusion runs through the Haggarty case from start to finish’. Each was published in the last number of weeks. They refer to the unsolved questions of the past and the ongoing battle over the structures and mechanisms required to deal with its legacy.

Northern Ireland is 19 years on from the signing of the peace deal, the Good Friday/Belfast Agreement. The Agreement saw the cessation of more than 30 years of violent conflict, during which over 3,700 individuals were killed, over 40,000 injured and tens of thousands displaced due to intimidation and political violence. It also provided for the release and reintegration of political prisoners, decommissioning of paramilitary weapons, reform of the police and criminal justice system and enhanced protection of human rights. What the Agreement did not do, and in contrast to many transitional societies, was to propose how best to deal with the past and in specific create dedicated mechanisms of truth recovery.

This does not mean that truth recovery has been absent in Northern Ireland. In fact, the opposite is true. There are a plethora of truth recovery bodies – ranging from high profile public inquiries, to police-led cold case reviews, to local storytelling initiatives. Yet, truth remains contested, the approach is ‘piecemeal’ and has been fraught with claims over the independence, impartiality and accessibility of the various mechanisms, creating considerable ‘accountability gaps’. Moreover, victims and survivors are frequently falling between the gaps between the different mechanisms, receiving neither truth or justice or an adequate response to their needs.

For these reasons, there has been a lively and protracted debate on the creation of a formal overarching truth recovery mechanism. The latest proposals can be found in the Stormont House Agreement, signed in December 2014. It proposes the creation of:

The potential is clear – the establishment of mechanisms of truth recovery that offer the possibility of correcting the weaknesses and pitfalls of the piecemeal approach to the past. However, the past, its ghosts and its political capital exerts a considerable hold over Northern Ireland’s politicians. At the time of writing, the Northern Ireland Assembly is in disarray and politicians from the major political parties are locked in negotiations as they attempt to find some common ground on which to build a programme for government. Progress has not been forthcoming and the legacy of the past remains at the heart of the political battleground.

There are concerns – both real and perceived on all sides. They include unionists’ concern that a formal truth recovery process would be ‘one-sided’ with an investigative bias tipped towards atrocities committed by the security forces. Senior unionist politicians have also queried whether and to what extent the Irish government will participant in the sharing of files and archives concerning the past.

For their part, with responsibility for the greatest loss of life during the conflict, republicans have many unanswered questions and the suggestion of a ‘corporate’ approach to the past whereby information is given at a collective level likely to be a difficult pill for victims and survivors to swallow. The British state too has fears concerning its role during the conflict – particularly in relation to the level of collusion with loyalist paramilitaries. Their determination to impose a ‘national security’ caveat governing the flow of information in and out of Historical Investigations Unit does little to inspire confidence in their commitment to truth recovery.

In this vacuum, the past continues to haunt the present while victims’ and survivors’ expectations are continually raised then dashed. For those who have waited 30 years or more for information about their case or to tell their story or for the provision of adequate redress, the current impasse is untenable. The growing prevalence of trans-generation trauma is testament to the depth and extent of unresolved trauma. At the same time, both forensic evidence and personal eyewitness testimony is altered with the passage of time. Simply put, those who need information and those who have information are aging and many will take their questions and answers to their graves. Meanwhile, details of the past continue to emerge on a daily basis with the potential to destabilize hard won social and political stability. Accountability is also lacking, with the failure to adequately and wholly investigate the actions of the British state during the conflict.

The concerns outlined above are not insurmountable. Instead they have been tackled and resolved over the past number of years by the author’s and designers of previous legacy initiatives and by relevant NGOs and academics who are active in Northern Ireland’s lively civil society. What is needed now is political maturity and political generosity on all sides – values which have, at various points in the last 19 years, pushed the Northern Ireland peace process forward.

If Northern Ireland is to truly deal with its past and respond to the needs of its post-conflict society, then political will, and a commitment to implementation, openness and transparency must put in an appearance, and do so soon.

Dr Cheryl Lawther is a lecturer in Criminology in the School of Social Sciences, Education and Social Work at Queen's University Belfast. In July 2011, Cheryl's paper "Securing' the Past: Policing and the Contest over Truth in Northern Ireland' was awarded the Brian Williams Prize by the British Society of Criminology. This prize is awarded to a 'new' scholar who has made a valuable contribution to the further development of criminology.

Sexual Consent in Northern Ireland: The Social and Legal Dimensions