This weekend's electoral success of Sinn Féin has parallels with an electoral contest held a century ago. Dr Marie Coleman reflects on commemorations, 'RIC-gate' and the general election results. 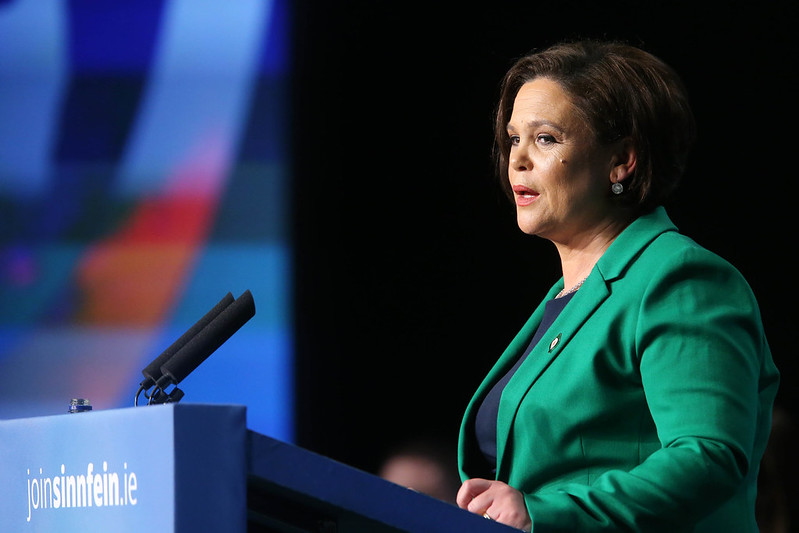 The Irish Independent declared the result of the election to be a ‘Sinn Féin sweep’. The election in question was that for Irish local authorities held on 2 June 1920, which resulted in Sinn Féin taking control of 29 of 33 of Ireland’s county councils. Similar headlines are appearing today in various Irish, British and international media outlets following Saturday’s general election in the Republic of Ireland. The electoral success of Sinn Féin is not the only parallel between these electoral contests held a century apart.

One of the first TDs declared elected yesterday was Sinn Fein’s Dessie Ellis, topping the poll in Dublin North West with 14,375 first preference votes, comfortably exceeding the quota of 8,097 on the first count. On the declaration of his election, Ellis was serenaded at the count centre by his supporters’ rendition of the rebel song Come out, ye Black and Tans. Dominic Behan’s lyrics recall the unpopularity of the Royal Irish Constabulary’s Temporary Constables, recruited largely from British ex-servicemen, who were drafted into Ireland in 1920 and gained a reputation for unrestrained and wanton violence during the Irish War of Independence.

The song gained renewed significance in the context of the 2020 election which came within a month of the outgoing Irish government’s cancellation of a planned centenary commemoration of the police forces which operated in Ireland prior to independence. The effect of the resulting ‘RIC-gate’ on the election was seen as highlighting the extent to which the Fine Gael-led government was out of touch with public opinion in the republic generally. Those who were first to condemn the planned commemoration, such as Fianna Fáil’s mayor of Clare, Cathal Crowe, appear to have benefitted electorally from their stance; Crowe came second in the Clare poll and appears likely to be elected.

The abortive RIC commemoration was part of the Irish government’s extensive process of marking the events of one hundred years ago that led eventually to partition and independence for southern Ireland. Since 2013 the government has spent seven years highlighting the significance of the foundation of the Irish Volunteers, the 1913 lockout, the First World War and the Easter Rising among other seminal events during the 1910s. Looking at the result of yesterday’s election in the this context, the Dublin City University historian, Dr Will Murphy, raised the question of whether there is a causal relationship between this emphasis on Ireland’s past republican struggle and renewed support for Ireland’s principal republican party.

While the decade of centenaries, in the short and long term, appear to have had some impact on this election, the focus will now shift to looking at how any government including or supported by Sinn Féin will approach the remaining commemorations between now and the centenary of the end of the Irish Civil War in 2023. These years will include the centenaries of the most intense phases of the Irish War of Independence, the partition of Ireland and the creation of Northern Ireland, and the Irish Civil War.

Commemorating a civil war is difficult in any country but the prospect of the centenary of the Irish Civil War taking place under a government composed of Fianna Fáil and Sinn Féin (one possible outcome of the election) – both parties descended directly from the anti-Treaty side which opposed and sought to overthrow the new state during 1922 and 1923 – raises dilemmas for the government itself and the defence forces. One convenient solution would be to delegate the ceremonial side to the head of state, President Michael D. Higgins. As the son of an anti-Treaty IRA man, who was raised by his pro-Treaty National Army uncle, Higgins’s family background personifies the acrimonious ‘brother against brother’ divisions that characterised the Irish Civil War.

The way in which any Irish government including or supported by Sinn Féin will approach the centenary of partition is much more intriguing. The Irish government’s expert advisory group on historic commemorations has recommended apolitical activities to ‘mark the centenary of the partitioning of Ireland and the foundation of Northern Ireland’, including the release and digitisation of relevant archival material and a ‘significant academic conference’, which is scheduled to be held here at Queen’s University later this year.

From the northern perspective of such commemoration, the Democratic Unionist Party ‘wants Northern Ireland to celebrate its centenary as a beacon of achievement within the United Kingdom.’ The party’s recent election manifestos have floated the idea of a bank holiday in May 2021 to mark the centenary of the coming into effect of the Government of Ireland Act, the legislative basis for the establishment of Northern Ireland.

It was never clear how any Irish government would have reacted to such a commemoration or whether representatives would have attended it if invited. It is safe to assume that no Irish government that includes Sinn Féin will recognise any such event. The only way in which Sinn Féin is likely to commemorate partition is in seeking to reverse it through a border poll.

While current issues such as homelessness and hospital waiting lists contributed largely to the result of the 2020 Irish general election and seeking solutions to such pressing concerns will consume the focus of the new government, the echoes of 1920 were still audible and will continue to resonate during the lifetime of the new government.