The 2017 Westminster election in Northern Ireland: towards two-party politics?

With the continued decline of the UUP and SDLP, Dr Chris Raymond looks at whether it is premature to say that two-party politics have come to stay in Northern Ireland.

The 2017 Westminster election saw the two largest parties in Northern Ireland elevated into the national spotlight.  Not only did the DUP and Sinn Féin shut out their more centrist rivals, the UUP and SDLP, but the consolidation of the vote in Northern Ireland on these two parties is having implications for the formation of the next government at Westminster.  While there has, and will continue to be, greater attention paid to the two largest parties, as will the continued decline of the UUP and SDLP, it is premature to say that two-party politics have come to Northern Ireland.

Continued Slump for the UUP and SDLP

The 2017 election saw the DUP and Sinn Féin dominate the electoral scene in Northern Ireland.  After it became clear the Conservatives had failed to win a majority, attention immediately turned to the DUP and its enhanced seat share (10 seats, up from 8 in 2015) to prop up a Conservative minority government that can pursue the UK’s departure from the EU.  With the support of the DUP’s 10 MPs, the Conservatives would have a parliamentary majority of two; with Sinn Féin not taking its seven seats, the Conservatives’ (potential) supply-and-confidence agreement with the DUP was faced a slightly less tenuous majority of six MPs.

Most worrisome for those concerned with both parties’ futures is the fact that each party fell further behind in seats across Northern Ireland.  This can be seen in Table 1, which presents the number of constituencies in which each of the five major parties finished first or second.  Whereas the UUP and SDLP finished first or second in eight seats in 2015, both parties finished second in only three seats each.  Such a finish puts the UUP and SDLP on par with the Alliance.  This suggests these two parties face continued threats to their electoral viability, threats which will start to call into question their continued existence (barring some form of radical change).

Table 1: The Number of Constituencies in Which Each Party Finished in the Top-Two Spots

The decline of the UUP and SDLP was matched by the improved performance of the DUP and Sinn Féin.  In an increasing number of seats, Table 1 shows the DUP and Sinn Féin finished in the top-two spots.  With the increased focus on these two parties, some have speculated as to whether we are heading towards two-party politics in Northern Ireland.

Even though Table 1 suggests the UUP and SDLP attracted smaller vote shares in 2017 than in previous elections, multiparty competition remained the norm in 2017 election.  This is because the Alliance and Green parties managed to win sizeable vote shares in several constituencies.

The Alliance’s vote share remained relatively stable in 2017, winning 7.9 per cent of the vote in Northern Ireland (down 0.6 percentage point from 2015), the Greens even more so (winning 0.9 per cent of the vote in both elections).  Combining these parties’ vote shares with the remaining vote shares of the UUP and SDLP, constituency-level party systems remain quite fragmented despite the gains made by the DUP and Sinn Féin. 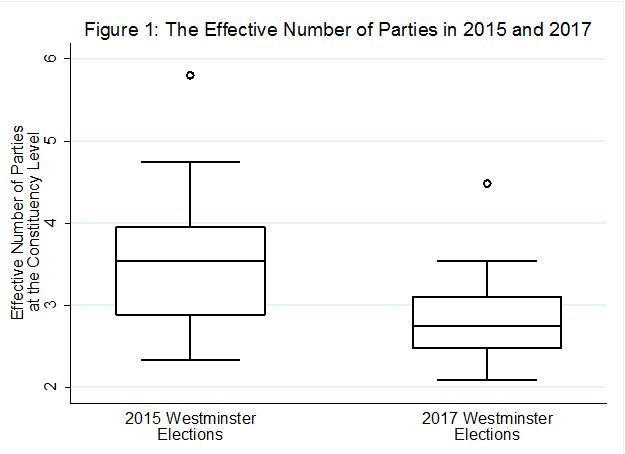