Coronavirus and the need for a new social and economic contract

In order to stem the inevitable economic downturn that will follow the COVID-19 crisis, we need something that provides every single person with the basic economic security they are entitled to. We need a Universal Basic Income says Patrick Brown. 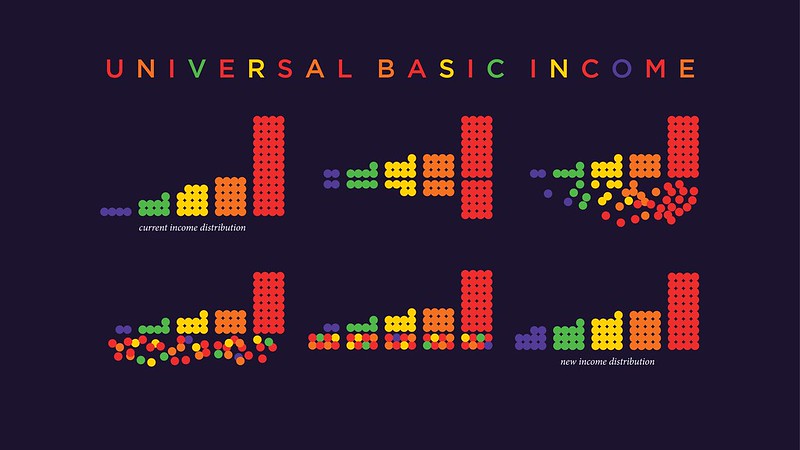 Just as it has exposed the weakness of our bodies to a novel pandemic, the coronavirus has laid bare the precarious nature of our economic system. Financial crises have been and gone and are an inevitable by-product of a market economy, but this time is different. Never before has the core component of the economy – people being able to go about their daily business – been threatened in such a fundamental way.

That is why no world government is talking about bailing out the banks, like they did in 2008, but rather bailing out people. In the UK, the vast majority of COVID economic relief so far has been designed to get money into the hands of individuals, whether that be by relaxing eligibility to Universal Credit, covering earnings for the self-employed, offering grants to small businesses or paying 80% of workers’ wages. The government realises this is no ordinary dip in the market – this is an existential threat to the social and economic contract that has existed since the end of WW2. People are told to work hard, be active and succeed, but this virus strips them of the ability to do so, and in doing so has cast a spotlight on the inherent insecurity of our economic system.

Unfortunately, in trying to provide the economic security they know is necessary to stop the economy from collapsing in on itself the government has, in typical fashion, created a range of overly complicated, means tested and administratively intensive schemes. Schemes which will leave some people with no income until the Summer and will leave many without adequate support whatsoever. This is demonstrated by a million new claims for Universal Credit, exclusion of many small businesses and recently self-employed people from grant support, unscrupulous employers using the situation to skim their wage bill rather than furlough staff, and students who are forced to pay for accommodation they can’t live in and an education they can’t receive.

These schemes may be enough to just about get us through the worst of the crisis. As a society we will do what we can to help those who fall through the cracks. But to stem the inevitable economic downturn that will follow this crisis, we need to think big and move fast. We need something that provides every single person with the basic economic security they are entitled to. We need a Universal Basic Income (UBI).

What is a UBI?

A UBI would pay every individual enough money to live on with no strings attached, regardless of their income or circumstances. It would not be means tested or taxed and would be paid directly into each person’s bank account every month (with pre-paid debit cards for those without a bank account or permanent address). I propose a ‘Coronavirus Recovery UBI’ of £800 a month for every adult (£9,600 a year) and £400 for children. This would help people recover from loss of income, stimulate consumer spending and provide an essential safety net in the event of the virus reoccurring or any other future crises. Spain and the USA are already offering some form of basic income to cope with the crisis, and if Northern Ireland is going to adequately recover it needs to do the same.

The current economic model of growth at the expense of ballooning inequality, compounded by a decade of deep cuts to public services, has failed. Our NHS is at breaking point, over 100,000 deaths have been linked to austerity and the top 1% of society owns almost a quarter of our wealth. In Northern Ireland, 1 in 4 children are born into poverty, we have some of the highest deprivation levels of any region of the UK, the highest rates of poor mental health and paramilitary crime has been on a steep increase for the first time in many years.

There is no better time than now to change direction and help usher in a new social and economic contract for Northern Ireland. A UBI would end material poverty overnight and where it’s been tested it has shown huge transformative potential such as: improving mental health and wellbeing, decreasing hospitalisation rates, improving educational outcomes and reducing crime.

A permanent UBI could act as venture capital for ordinary people, increasing economic activity by eliminating poverty traps, encouraging entrepreneurial activity and stimulating spending. It could reinvigorate civic society by facilitating more volunteering, remunerating carers, freeing up time for political participation and boosting social capital and social trust. My own research considers the impact UBI could have in healing divisions and offering a ‘peace dividend’ for everyone living in a post-conflict society. This includes how it could reduce incentives to join paramilitary gangs, provide compensation for victims of the Troubles and help to tackle the ongoing costs of division.

How much would it cost?

Critics of a UBI often raise the ‘how would we pay for it’ spectre. Interestingly, no such criticism or references to magic money trees have been directed towards the government’s current schemes. However, the means to pay for a UBI, even one as substantial as £800 a month, is achievable. The gross cost of a UK wide UBI for every person would be around £580bn a year. People often use this misleading figure to dismiss UBI, ignoring the net cost of such a scheme. Calculating the net cost is easiest within the UK context as delivering a UBI will necessitate significant changes to welfare and tax regimes which are not devolved to the NI Executive.

Let’s consider a number of ways we could pay for a UBI: scrapping the tax-free allowance would give everyone £140 a month and replacing the vast majority of existing benefits with UBI would provide £288 a month – £125 from pensions alone. The estimated cost of poverty in the UK is £78bn every year, and a UBI would dramatically reduce this, offering as much as £92 per person per month back to the public purse from reducing the strain on our hospitals, police, prisons and many other public services that deal with the fallout of poverty. Closing tax loopholes adds another £40 a month, which brings us to almost £600 a month before looking at a range of revenue raising options. These might include an automation tax (to compensate workers who will inevitably be laid off as more and more jobs are automated), a financial transactions tax, a wealth tax, increases to VAT, a data tax, a carbon tax and other taxes sorely needed to tackle inequality in a modern economy.

An idea for everyone

A UBI would represent the greatest devolution of power and freedom to individuals since the advent of democracy. For those on the right who want a free market and a simplified state that doesn’t interfere in people’s lives, UBI levels the economic playing field and gives everyone a fair chance to thrive. For those on the left, it can eradicate poverty, tackle inequality and plug the gaps in the welfare state. And for those of us who don’t want to move left or right but forward, a UBI has the ability to unlock human potential and deliver an unprecedented opportunity for progress on the other side of this crisis.

Interesting idea, I have been looking at this for some time. my conerns are as follows:

the lack of housing both social and private over the last 40 years has caused an overpriced housing market by 200% in the south.

A great article. In reply to Robin’s first concern i see it as unlikely that a UBI would trigger inflation.

So long as UBI would be funded through the redistribution of wealth, as the author has suggested (through redirecting funds from universal credit, closing tax loopholes, raising certain taxes), RATHER THAN CREATING / PRINTING NEW MONEY then A UBI would not likely cause any significant inflation.

If everyone suddenly had twice as much money prices would rise to compensate for it, but seeing as this proposed UBI would require wealth redistribution, it would see expendable incomes rise within many areas of society and a small decrease in wealth accrual (not expendable income) in others.

INFLATION TODAY IS DETERMINED BY THE RATIO OF MONEY CIRCULATING IN AN ECONOMY VS THE AMOUNT OF GOODS AND SERVICES ON SALE WITHIN IT.

a UBI would provide an increase in expendable income for many people, causing a demand for an increase in goods and services available; therefore not causing inflation.