Below is the transcript of a speech given by Professor Colin Harvey at the recent Franco-British Lawyers Society Colloquium in Belfast entitled ‘Navigating Brexit - Icebergs Ahead? UK, Irish, French and EU Perspectives.’ 15 November 2019 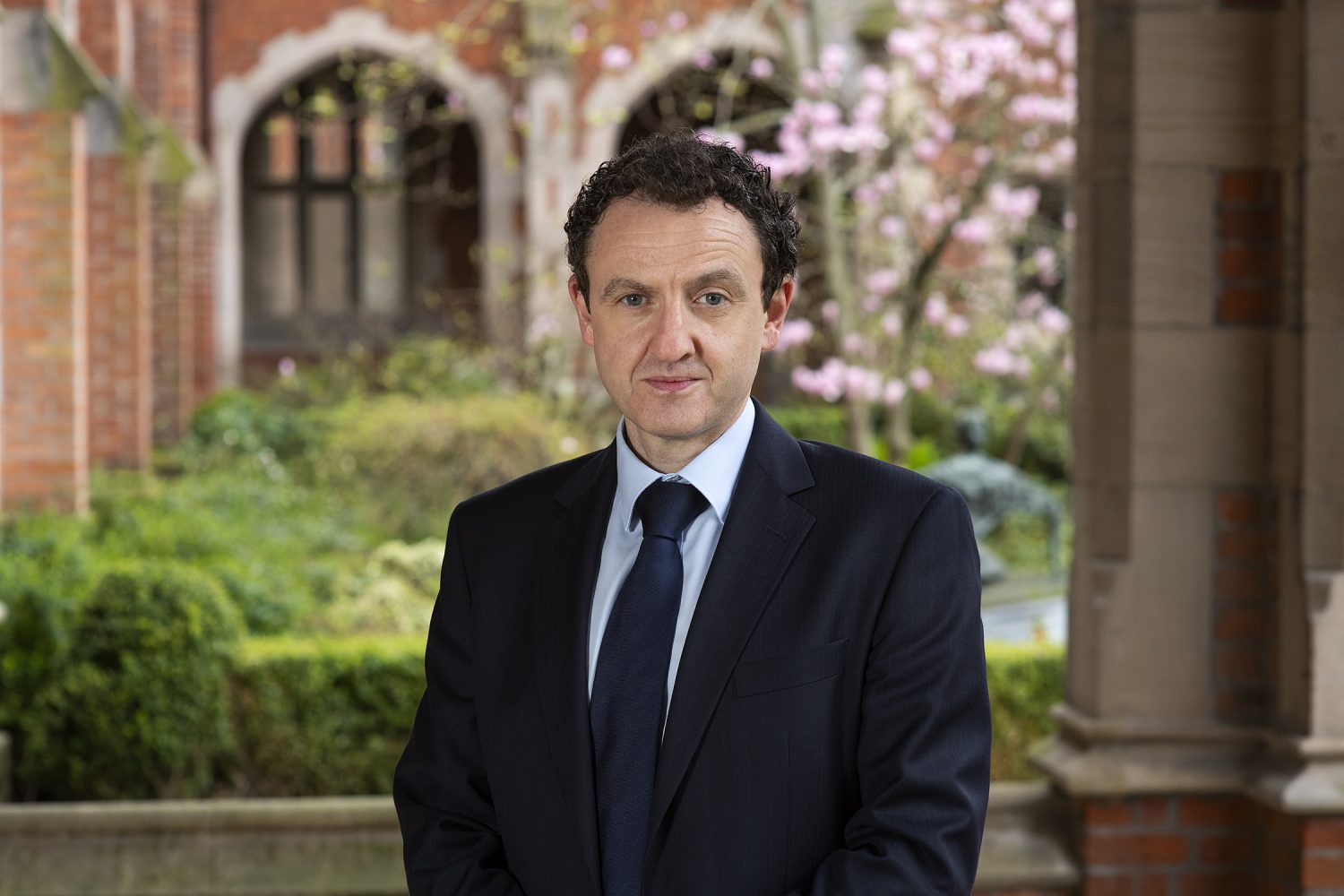 Thank you for the invitation. I feel honoured, privileged and out of place – an academic intruder in such a distinguished gathering.

The theme: Navigating Brexit, Icebergs Ahead is apt. We are in Titanic Town. We are in a contested region that was and remains a special arrangement; carved out nearly 100 years ago, with specific ethno-national objectives in mind.   That is why the events of 1998 were so significant: the Good Friday Agreement, with its overwhelming endorsement on this island, represented a major constitutional moment that should have made more of a dent on orthodox British constitutional legal thought than it has to date. That may still change.

I will address four themes: First, whatever happened to the new beginning; second, a constitutional conversation that is already happening; third, the role of Brexit; and finally, I consider ways forward. All advanced in a spirit of open dialogue and debate.

First, whatever happened to the new beginning?

As the term Brexit suggests we (everyone living here) have an intriguing relationship to an event and process that often appears to be happening to us, without majority agreement, and with differing views on the appropriateness of the mitigating measures in the Withdrawal Agreement and Protocol.

Arguably, the absence of agreement to Brexit itself, from two constituent parts of the UK, stands as the most significant problem. That this is cast as a political argument, with no constitutional legal traction, is at the centre of a dilemma. A dilemma that raises larger questions: How did we get to the point, post Good Friday Agreement here, where its principles have garnered so little practical constitutional legal weight within the UK, but have gained such widespread international recognition and acclaim (including within the Protocol)? All the wishful thinking about a more legally pluralist UK, the talk about new forms of constitutionalism – and our unique constitutional circumstances – confront the granite reality that is a Brexit brought about by a UK-wide vote, and the enduring hold of traditional principles of British or should that be English constitutional law.

Do we have nothing legally distinctive to say into this, as a place that is not just like England, Scotland or Wales? Do our constitutional arrangements not demand more legal attention within the judicial hierarchies of the UK than they receive? Is it sufficient simply to say that legislative failings persist, and there is a problem of legal translation into domestic law? Did we not have a constitutional moment in 1998 that normatively changed something? It appears not.

That said, as any future British government and Parliament will find, the messy, complex nature of multi-level and plural forms of constitutionalism will doggedly persist. Brexit will remain legally complicated for the UK, as will the future relationship with the EU, and this will be giving judges and lawyers headaches for years to come – including on the meaning of the EU (Withdrawal) Act 2018, and in relation to the EU (Withdrawal Agreement) Bill (if and when enacted), as well as those key sections of the Good Friday Agreement that are referenced in the Protocol. What, for example, does the ‘no diminution’ obligation in article 2 of the Protocol mean in precise terms, and what does it require in practice? This before there is even mention the elaborate architecture of the Withdrawal Agreement and Protocol once in place.

To stretch the conference theme to breaking point, perhaps Brexit is the iceberg that will sink the UK in its current form. The entitlement to hold a view on whether that outcome is a good or bad thing is hard wired into our supposed ‘new beginning’ here. The key is that constitutional conversations are guided by the values of the GFA, and that new configurations follow informed dialogue, respectful debate and proper planning.

Second, my own view, is that this island is already in a conversation about the constitutional future – there is a habit of neglecting the work completed or underway – by Justice Richard Humphreys among many others (we collated some of this in our recent report on the EU and Irish Unity). Lazy, dismissive shorthand prevails – at its worst it reveals a condescending attitude towards civic leadership that takes place outside of approved, orthodox settings. Forgetting of course that it was courageous civic leadership that underpinned the entire peace process.

Pretending that there is no work done or this is not in fact happening is unhelpful – especially if the collective ambition is to encourage and promote responsible planning and preparation.

The island is on a path towards concurrent referendums on whether people would prefer a united Ireland (and thus EU membership) or wish to retain the Union with Britain. This is acknowledged within the internal constitutional legal orders of both states, underpinned by international law, and recognition is implied by the EU in its endorsement of the GFA in all its parts. Making use of the arrangements to test the principle of consent/right to self-determination – at the appropriate time and with proper preparation – should provoke no one. Planning has commenced; governments will catch up.

Third, Brexit. What more can be said? Brexit alters the nature of the discussion about constitutional futures because, for this island, Irish reunification means automatic return to the EU – as confirmed by the European Council in April 2017, and as President Macron recently observed. That might be a good or a bad thing depending on your view of the EU, but it will inform the debate.

The Withdrawal Agreement and Protocol are the predictable outcomes of agreed negotiating objectives and established positions. For the purposes of conservation and preservation, NI was always heading towards a special arrangement. The Protocol has been through a number of iterations. In the end, this place gets a complex legal arrangement with democratic consent built in, and intriguing provision for rights and equality (as noted, a ‘no diminution guarantee’ that will have people puzzling over its meaning and enforcement for years).

Northern Ireland’s special status is confirmed and endorsed now and into the future. What was a temporary arrangement/insurance policy will become a possibly enduring form of messy special status.  That should tell us where the Conservative Party plans to go in its future relationship with the EU. Given that context, what looks like a legal ‘solution’ to deal with the main objectives (no hard border, protect GFA, and preserve all island cooperation) was required and not a backstop.

This could become the ‘new normal’ for a region that will retain an agreed way back to the EU, and a possible exit route from this new arrangement. Will this, over time, bed down into something permanent that people see as the ‘new normal’ or be viewed by businesses and others as either better replaced by the real thing: full EU membership or abandoned. How this plays out remains an open question.

The options on the constitutional future are not disturbed by this – and the outcomes not pre-determined. But the framework within which the choice will be made has shifted, as will the nature of the various propositions.

Fourth, ways forward. It must be stressed again: what we are discussing is in full alignment with the constitutional legal orders of both states – an agreed, democratically endorsed foundational constitutional compromise underpinned by domestic and international law. Agreement on this compromise stands behind everything else that has emerged since 1998. Pull it away, label it provocative, dangerous and divisive, dismiss it as decorative and you risk the whole edifice collapsing even further. A different approach is required.

For the purposes of clarity, certainty, planning and preparation, I have suggested a date to be agreed by both governments, within the framework of the British-Irish Intergovernmental Conference: 22 May 2023 (which would be within the lifetime of the next Parliament – if it runs its ‘full course’ – a big if in the current context). A Monday is not ideal.  But sufficient time to allow for the required levels of preparation.

Such an approach would end speculation about the criteria and required evidence that will trigger such a step – but will not end disagreement and challenge on, for example, the question to be asked and who will be eligible to vote.  Both governments – through a new Joint Declaration and associated domestic law and policy changes – would set and implement the framework, following extensive, wide and deep consultation and engagement – including, but not limited to, political parties. Measures outlined would embrace a Citizens’ Assembly and a Minister for reunification in Ireland, with appropriate North-South inclusions and linkages to ensure informed and evidence-based dialogue.  The matter should not simply be left to the Secretary of State and the flexibility to engage in the way noted is, arguably, already there in the provisions of the Northern Ireland Act 1998, and in the way they have been judicially interpreted to date.

To conclude. It was inevitable that Brexit would prompt constitutional reflections. Removing two constituent parts of the UK from the EU without their agreement was always going to lead us here. Recall how the EU membership question featured in the Scottish independence referendum in 2014, and remember that N. Ireland has a remain-return option via the Good Friday Agreement – in a context where constitutional goals have equal legitimacy, and where achieving the unity of people and territory remains a continuing constitutional obligation in the Irish context, and for Irish citizens.

As these conversations advance, and they will, one final thought. The values of human rights and equality are also central to the Good Friday Agreement. The desire for a society not based on shared misery and mutual distrust. These values now map on to urgent matters such as climate justice and environmental rights. Vital ingredients in our ongoing constitutional reflections.

So, our theme again. We must take care of all the people on the ship or ships, and if we are not careful the icebergs may melt, and there may be no island or islands to share.

If the GFA works and has broad-based appeal, then why not keep it? The simplest and most easily understood constitutional framework for the future of NI would be to simply tweak the GFA to allow for a different sovereign if and when a border poll were to pass.

That is, the secretary of state would be appointed by dublin rather than london, and all other existing powers of the NI assembly and local laws and authorities would remain the same for a certain period. Given that the current GFA has operated for a bit over twenty years, a twenty year period for the GFA post-border-poll would seem reasonable.

In this way, voters in a border poll would have a clear understanding of what they were voting on, and practical experience of how it would work. flags and defence forces would change, but change to day-to-day life would be minimal.

The GFA is effectively NI’s constitution. Why not use it like one?