What is the backstop? 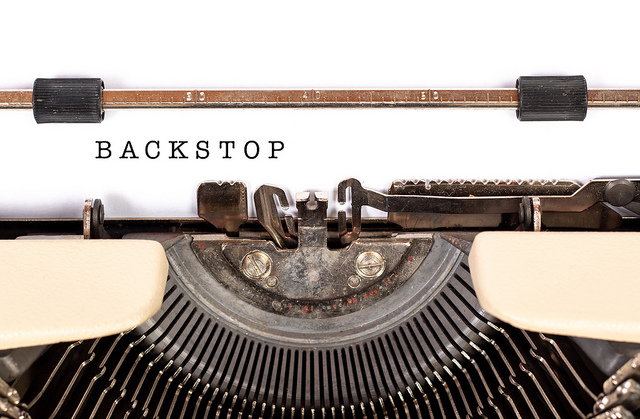 But what is it? Simply put, the backstop is a set of arrangements contained in a dedicated Protocol on Ireland/ Northern Ireland annexed to the Withdrawal Agreement.

These will generally enter into force only if the terms of the UK-EU relationship to be negotiated during the transition period fail to deliver on the shared UK and EU commitments ‘to address the unique circumstances on the island of Ireland, maintain the necessary conditions for continued North-South cooperation, avoid a hard border and protect the 1998 [Belfast/Good Friday] Agreement in all its dimensions’.

In this sense, the arrangements are an insurance policy. They cover a range of issues, including: the rights of individuals; the Common Travel Area between the UK and Ireland; customs; regulatory alignment to ensure the free movement of goods; the maintenance of north-south co-operation; and the single electricity market on the island of Ireland.

These will address issues related to the implementation of the Protocol including its review. Assuming the Withdrawal Agreement enters into force, and in the absence of alternative arrangements being agreed in time, the Protocol’s backstop provisions will apply from 1 January 2021, or—given the option of a two-year extension to the transition period—1 January 2023.

In the intervening period, the UK and the EU are committed to finding ‘alternative arrangements’ so that there is no need for the backstop to kick in. Strictly speaking, there isn’t one backstop, but a series of backstop arrangements addressing each of the issues noted above.

However, most people think of the backstop as the arrangements in place to avoid a hard border and specifically to avoid checks and controls on the movement of goods.

Even here, however, there are really two elements: one relating specifically to Northern Ireland and the movement of goods across the Irish border, and the other to the UK and focused on minimising customs checks and controls on goods moving between the UK and the EU.

The Northern Ireland-specific element—if it entered into force—would see Northern Ireland being treated as part of the EU customs territory and maintaining alignment with those EU regulations required to maintain the free movement of goods across the border into Ireland and the EU’s internal market.

There would, despite the UK’s withdrawal from the EU, be no requirement for additional checks and controls, and so a hardening of the border would be avoided.

The downside of this arrangement is that, with the rest of the UK outside the EU customs territory and potentially diverging from the EU in terms of, for example, product standards, some checks and controls would be required on the movement of goods from the rest of the UK into Northern Ireland.

Reinforcing this commitment is the UK government’s statement that it will introduce ‘strong protections in law that guarantee [such] unfettered access’. The desire to minimise checks and controls provides an important rationale for the UK-wide element of the backstop: the ‘single customs territory’ between the UK and the EU.

As a backstop arrangement, this would involve the UK remaining in a customs union arrangement with the EU after the transition period has expired. Customs checks would be reduced to a minimum. Goods moving to Northern Ireland from the rest of UK would, however, need to be checked to ensure they meet EU standards.

Here, in an attempt to ‘avoid any preventable barriers’ the UK government has committed to ensuring ‘no divergence in the rules applied in Great Britain and Northern Ireland in areas covered by the Protocol’. The EU and the UK intend for the backstop arrangements not to be used.

If they do enter into force, the commitment is to ensure that they are only temporary and will be replaced by other arrangements. With regard to the movement of goods, this includes the option of ‘facilitative arrangements and technologies’.

Although such arrangements and technologies have been developed and feature prominently in the Malthouse plan , the UK government and certainly the EU are far from being convinced that their deployment would deliver on the shared ‘guarantee of avoiding a hard border, including any physical infrastructure or related checks and controls’.

Their positions may change as new arrangements and technologies are developed. Provision therefore exists to review whether the backstop arrangements are still required.

Any decision that the Protocol should cease to apply, in whole or in part, is to be taken jointly by the UK and the EU. There is currently no time limit on the application of any of the backstop arrangements and nor is there provision for a unilateral withdrawal from any of them.

Article originally appeared in The UK in a Changing Europe website.

Will the UK remain a member of the 48 member council of Europe after it leaves the EU?