Following the results of last week's European Parliament elections, Dr Chris Raymond looks at the continuing rise in support for the Alliance Party and its leader Naomi Long. 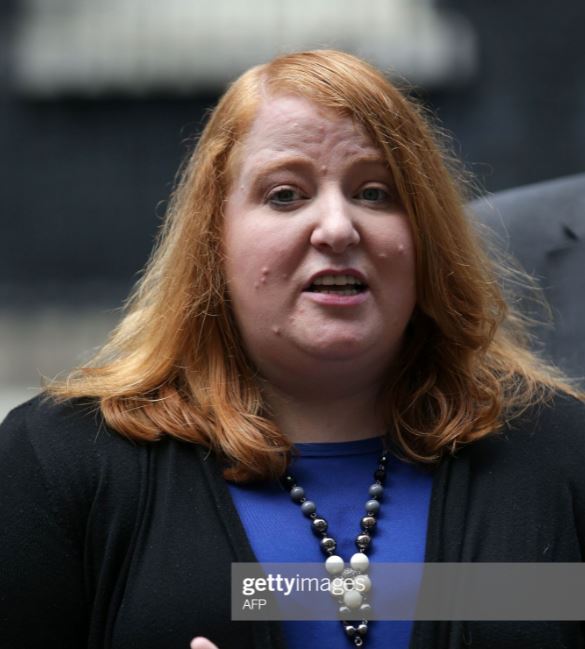 Naomi Long’s election in the election to the European Parliament marked a significant milestone.  Her victory was, by far, the Alliance Party’s best performance in a European Parliamentary election, increasing their vote share by more than 11 percentage points over 2014.  It also marked the continued decline in the performance of the Ulster Unionist Party, whose reduced vote share was not helped by the loss of the incumbent Jim Nicholson.

But her election should not come as a surprise.  Without diminishing her personal efforts in this election, Naomi Long’s election comes on the heels of another breakthrough success for the party in the local elections earlier this month.  More fundamentally, however, her election victory reflects the end-result of societal trends that will likely lead to similar outcomes in future elections.

The Alliance Party’s recent election wins have been supported by two related long-term trends: the increasing share of society who do not identify as unionist or nationalist, and the secularisation of society.  These two trends are illustrated in Figure 1, which uses data from the Northern Ireland Life and Times surveys to estimate these two trends from 1998 to 2017 (the most recent survey that is publicly available).  Taking into account sampling variability in each survey, the black lines smooth out the variation from survey to survey to give a best guess as to the true trend in the population at large. 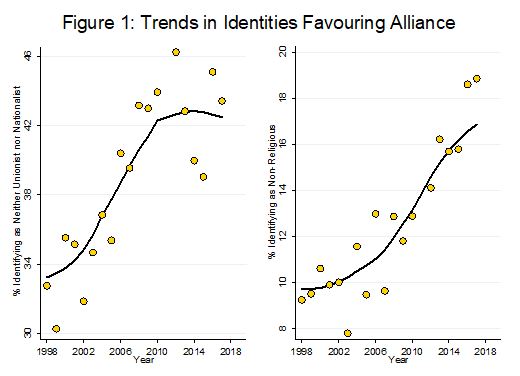 The left side of Figure 1 shows that, over time, more and more people in Northern Ireland are identifying as neither unionist nor nationalist, increasing from around 33 per cent of the population in the late ‘90s to around 43 per cent in recent years.  Additionally, whereas around 10 per cent did not identify with a religion (Protestant, Catholic, or otherwise) in the late ‘90s, the percentage of the population today who do not identify with a religion has increased to more than 17 per cent.  Because the Alliance Party has tended to perform better among these groups of voters than among unionists/nationalists and Protestants/Catholics (given the party’s cross-community appeals to voters), these social trends create the conditions for the Alliance Party’s vote share to improve over time.

Alliance Win as the Culmination of Social Trends

In addition to social trends creating the potential for improved Alliance performance, the Alliance Party has seen its levels of support among non-religious and non-unionist/nationalist voters increase over time.  As the party’s support among these groups has increased, the party’s overall support has tended to increase, leading to higher vote shares like those seen in the recent local and European Parliament elections.

These trends can be seen in Figure 2, which uses data from the Northern Ireland Life and Times survey to measure respondents’ preferences for the Alliance Party in each year surveyed by the Life and Times.  The left side of Figure 2 shows that as the Alliance Party’s support has increased among those identifying as neither unionist nor nationalist (the horizontal axis), the total percentage of respondents to the Life and Times surveys saying that they prefer the Alliance Party (the vertical axis) has increased as well.  The trend towards greater levels of support for the Alliance Party among voters who identify as neither unionist nor nationalist—reflected in the horizontal axis—reflects the political changes seen in recent elections: while the increased number of these voters in society creates conditions for improved Alliance vote shares, the fact more of these voters are doing so suggests that voters have made a tactical choice to back Alliance over moderate unionist and nationalist alternatives. 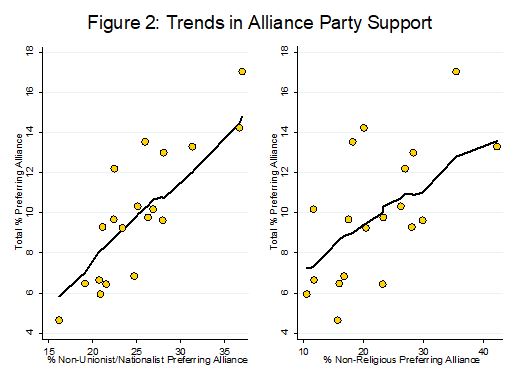 Alliance Surge or a New Normal?

While it might be tempting to explain the Alliance Party’s success in the most recent European Parliamentary election with reference to their decision to run a popular, articulate candidate, it is difficult to suggest that this will be a one-off success for the party.  The success of the party fits into a broader trend (albeit uneven) towards sustained increased vote shares for the Alliance Party in other future elections.

As other moderate alternatives struggle to maintain (let alone re-grow) their vote shares, the Alliance Party looks poised to capitalise on demographic changes in Northern Ireland society.  With increasing secularisation and the electorate’s move away from unionist/nationalist identification, the Alliance Party has an increasing base of potential voters that could propel the party into third place in other future elections.

What Green surge could mean for the new European Parliament