In the final of three articles on the 100th anniversary of Michael Collins’ death, Claire Smith discusses the significance of the 1996 film for 'post-conflict' Ireland 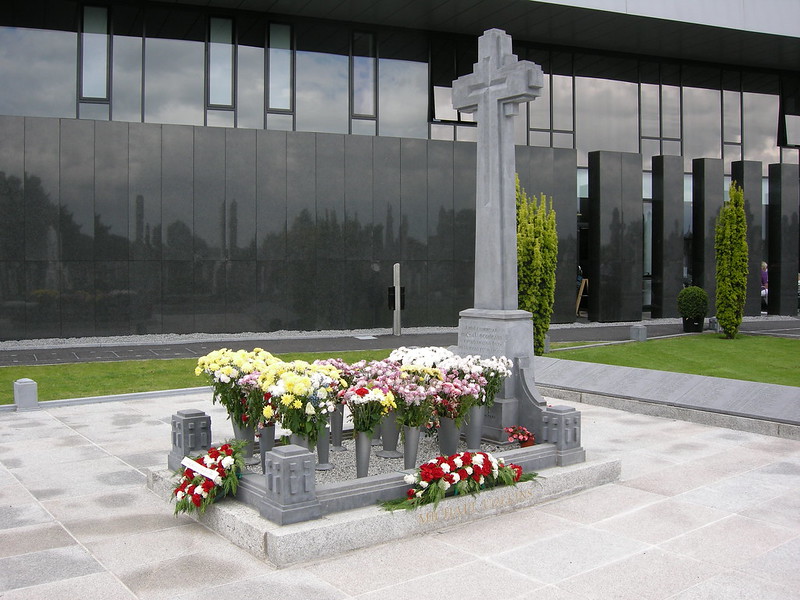 Monday 22 August 2022 marks one of the more significant dates in the Irish decade of centenaries, the one-hundredth anniversary of the death of the revolutionary leader, Michael Collins. In three reflections based on their research, historians for QUB look at the significance of Collins’s death in the context of 1922 and how his legacy and memory has been fashioned in politics and film in the intervening century.

Michael Collins (1996) has been described, by Michael Dwyer, as ‘the most important film made in or about Ireland in the first century of cinema’. Directed by Ireland’s Neil Jordan and produced by Hollywood’s Warner Brothers, Michael Collins was, in 1996, the largest cinematic production ever undertaken in Ireland – especially by an Irish director. With a Hollywood-budget of US$28 million, and an A-list cast (including Northern Ireland’s Liam Neeson as Michael Collins, Julia Roberts as Kitty Kiernan, and Alan Rickman as Eamon de Valera, to name but a few), the film broke all of Ireland’s previous box-office records, coming second only to James Cameron’s Titanic (1997) in the country’s all-time box-office list in 2000.

Despite Michael Collins’s undeniable Hollywood dimensions and unrivalled box-office success, the real importance of the film was a result not of the film’s cinematic spectacle, but of its depiction of Ireland – and Ireland’s early-twentieth century history – at a time when that history was in the process of being (re)imagined. Neil Jordan’s Michael Collins was, after all, primarily a national film text merely dressed, accessorised, and spruced up, by a global film-production giant.

Produced and released during the period of the peace process coinciding with the 1994 Provisional Irish Republican Army (IRA) ceasefire and the Good Friday Agreement of 1998, Michael Collins – depicting the life and career of the film’s namesake, the man thought to stand at the precipice of the country’s fall into nearly 80 years of conflict – was Ireland’s first wholesale cinematic step towards a re-evaluation and re-consideration of their supposedly ‘post’-conflict national identity. In his Michael Collins: Screenplay and Film Diary, Neil Jordan said that, from the outset, the film set a ‘fever running’ in Ireland.

Despite the high costs typically associated with intra-Irish film production, the film was shot predominantly in Ireland, using a complex of recognisable Irish streets, sites and scenery. The transformation and utilisation of the old Grangegorman psychiatric hospital in Dublin attracted thousands of fascinated onlookers daily, forcing the authorities to close the centre of the city to the public every Sunday. In fact, the public demand for access to the film-set was so intense that, for the weekend following the end of filming, the spectacular reconstruction – including full-sized replicas of the façades of the General Post Office and the Mansion House as they appeared between 1916 and 1922 (Civil War-damage and all) – was opened to the public. With tens of thousands of people visiting the film-set during this two-day period, several newspapers received letters urging the government to purchase the site as a national monument.

Public fascination was not merely confined to the film’s shooting locations. When the production studio issued their first open crowd-call in Rathdrum, County Wicklow, it was estimated that over 5,000 people – with period costume in hand – volunteered to feature within what they viewed as the first Ireland-meets-Hollywood historical epic. To the surprise of the film’s director and producer, the public’s interest was so great that many had to be turned away.

Such was the ‘fever running’ through the Irish people to take part in this piece of history in the (re)making that the film’s producer, Stephen Woolley, commented: ‘It’s absurd. It’s like we’re performing some service. We’ve been given this ticket, this key to the city. Because it’s Michael Collins, whatever we do seems okay. People just want to feel they’re a small part of it. I can’t tell you how exciting this is to the people of Ireland’.

Stephen Woolley had it right. For the people of Ireland, the production of Michael Collins provided a valuable opportunity through which to re-explore their recent history; to re-assess, during a moment in which the guns sat still and silent, their relationship with the past; to re-ponder the questions ‘who are we?’, ‘where are we coming from?’ and, perhaps most significantly, ‘where are we going?’.

Such was Michael Collins’s apparent significance in this ‘post’-conflict Ireland that, when the time came for the film’s release in the Republic of Ireland in November 1996, it was passed with only a parental guidance certificate, making the film available to the widest possible audience. When this controversial (because of the film’s foul language and depictions of violence) decision was made public, Sheamus Smith, Ireland’s official film censor, issued an important statement pronouncing that, ‘Because of the historical significance of the film, many parents may wish to make their own decisions as to whether or not their children should see it’. So significant was the film’s supposed role in re-directing the country’s trajectory that children – the true arbiters of Ireland’s future – were recognised as an important target audience.

Thus, during a period in which progress and reconciliation seemed more important and, indeed, more possible than ever, Michael Collins provided the people of Ireland with the chance to unite in a common purpose – that is, to assess the damage, pick up the shovel and dig through the rubble of the past to find the humanity beneath. Ultimately, with the support of Hollywood’s finest – and the sense of hope, promise, glamour and spectacle that accompanied them – Neil Jordan’s Michael Collins (1996) encouraged the people of Ireland to (re)imagine their ‘post’-conflict national identity – and all this, on the global stage.

Claire Smith is an MA student in Public History in the School of History, Anthropology, Philosophy and Politics, writing a dissertation on national identify and the portrayal of the past in the films ‘Michael Collins’ and ‘Braveheart’.

How significant was the death of Michael Collins?

A very interesting And informative article