As the Men's Health Forum in Ireland launches its 21st anniversary report, Dr Karen Galway and Shane O’Donnell look at why it is important to consider men’s health. 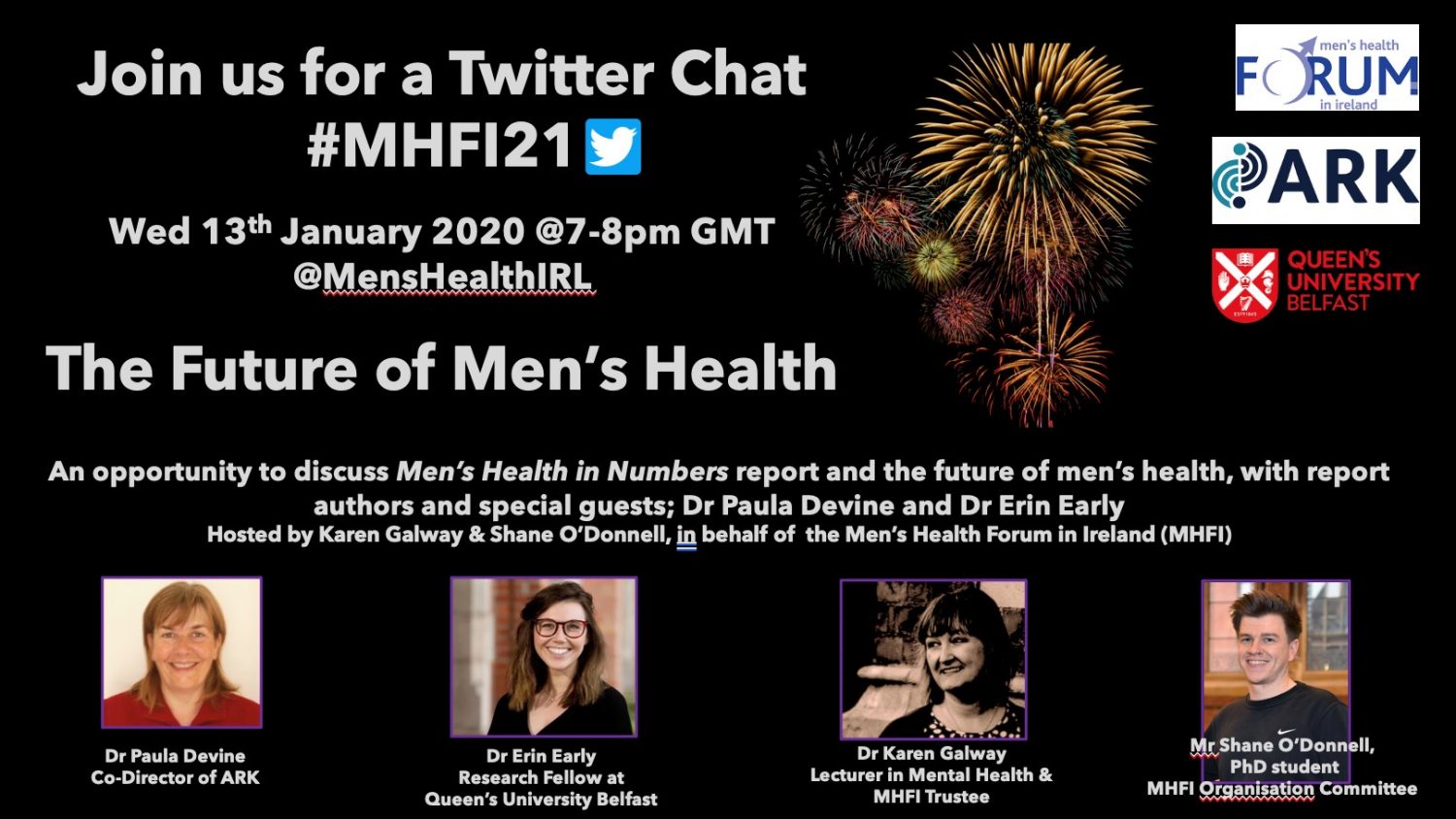 The Men’s Health Forum in Ireland (MHFI) are celebrating their 21st birthday this year. For anyone else celebrating a 21st birthday, we sympathise! The plans aren’t exactly as expected and we’ve all had to adapt. MHFI is no exception, and so we held a virtual celebration on 10 December.

The Men’s Health Forum in Ireland is a diverse network of individuals and organisations, men and women, which seeks to identify the key concerns relating to male health, to increase understanding of these issues and to address the impact of inequalities. Delivering men’s health research, training, pilot projects, collaborations and connections for both practice and policy impact over 21 years has given MHFI a unique oversight of men’s health on the island of Ireland and beyond.

Some people still do ask; why is it important to consider men’s health, as opposed to everyone’s health or women’s health?  Well, it is not a competition! However, we know some issues affect males and females differently, at various times across our life, and for different reasons.

Globally, and on the island of Ireland, men experience a disproportionate burden of ill-health. This burden of ill-health is largely from preventable diseases. While there is evidence that some of this relates to biological and genetic factors, it is largely attributed to lifestyle factors associated with gender or masculinities. Phrase like “big boys don’t cry” and “man up” are seemingly innocuous and first glance but represent and reinforce the way men should be, emotional withdrawn and invulnerable.

Even in the 21st century, men can be subject to ‘traditional’ views on masculinity and what it means to be a man growing up in this part of the world. Some of the narratives can potentially alienate men and act as a barrier to seeking help, forming healthy lifestyle choices, and meaningful connections that are critical to good physical and mental health. But the good news is this burden of ill-health is largely preventable and we all have a role to play in bettering the health outcomes of men. We all have a role to play in shaping the societal norms of how all sexes and gender are expected to behave in order to improve health outcomes and create a gender equality society. Indeed, research shows that societies with greater gender equality have better health outcomes for men. Men are our fathers, our brothers, our uncles and our friends – men’s health is everyone’s business.

In response to the idea that men’s health could be enhanced through recognising the impact of these societal norms, as well as the shape of our health services, MHFI was established back in 1999 in Northern Ireland.  Soon after that it became one of only a handful of health organisations operating as an all-island entity.  Our main contribution over the last two decades has been to increase awareness around men’s health needs in order to improve the health of men, young men and boys.  To do this, we get involved in a wide variety of activities, despite our small and nimble size.

We are managed by a small group of interested volunteers and have only one, highly valued employee!  Each year together we coordinate the promotion of Men’s Health Week in June, usually involving input from almost 100 health related charities and public health organisations.  We have spent over five years developing, evaluating and expanding training [the Engage Training modules] to support community and statutory based services to engage successfully with men. We’ve produced significant pieces of work titled Young Men and Suicide and Middle-Aged Men and Suicide to highlight the risks and protective factors involved in suicide prevention. These flagship projects are ongoing, while we also help to establish and support men’s health networks across NI and Ireland.

MHFI also provides evidence for policy development, supporting government departments in both jurisdictions and keep people informed about the latest developments, as well as supporting international efforts to lobby for men’s health matters, such as equity in HPV vaccinations.

In the current Covid-19 climate, where we see increased levels of isolation, loneliness and fear, we are also seeing increased community spirit, resilience and creativity.  With that backdrop, there has never been a more important time to consider and prioritise our physical and mental health.

At our birthday event we celebrated some of our major achievements.  We also launched our 21st anniversary report Men’s Health in Numbers, written by Dr Paula Devine and Dr Erin Early (ARK, Queen’s University Belfast).  This provides an update on Men’s Health in Ireland, which was MHFI’s first all-island men’s health report published in 2004. You can read a recent article by Paula and Erin on how placing men’s health within key government policies is pivotal to achieving good male health here.

The figures highlighted in the new report provide some cause for optimism, along with some areas of concern.  The four main causes of death among males across the island of Ireland continue to be neoplasms, circulatory system diseases, respiratory system diseases, and external causes of injury and poisoning.  However, the death rate for circulatory diseases has fallen over the past decade, perhaps due to the decrease in smoking levels and better treatment options.

The three mostly commonly diagnosed cancers across the island of Ireland for males are prostate, colorectal and lung, especially for middle-aged and older men.  The incidence of prostate cancer in the Republic of Ireland is the highest in the European Union, and may be a consequence of high levels of PSA testing.

Going forward, the impact of COVID-19 on the physical, mental, social and financial wellbeing of men and boys is unprecedented, and will have long lasting effects.   Addressing these issues will require changes at personal, societal, service delivery and policy levels.  Importantly, the Republic of Ireland was the first country in the world to adopt a National Men’s Health Policy, although there is no such policy within Northern Ireland.

You can read or download the Men’s Health in Numbers report by clicking here.

MHFI want to keep this conversation going.  Therefore, we are hosting a Twitter chat, on Wednesday 13th January @7-8pm. We would love you to join us to reflect on the implications from the report and to consider men’s health priorities that we should take forward over the next 21 years and beyond! #MHFI21

Dr Karen Galway is a Lecturer in Mental Health at Queen’s University Belfast and MHFI Trustee and Shane O’Donnell is a Marie Curie Skłodowska Early Career Researcher and Management Committee Member of MHFI.