Professor Anne-Marie McAlinden looks at some of the possibilities and challenges of constructing and delivering effective public apologies for historical institutional abuse. 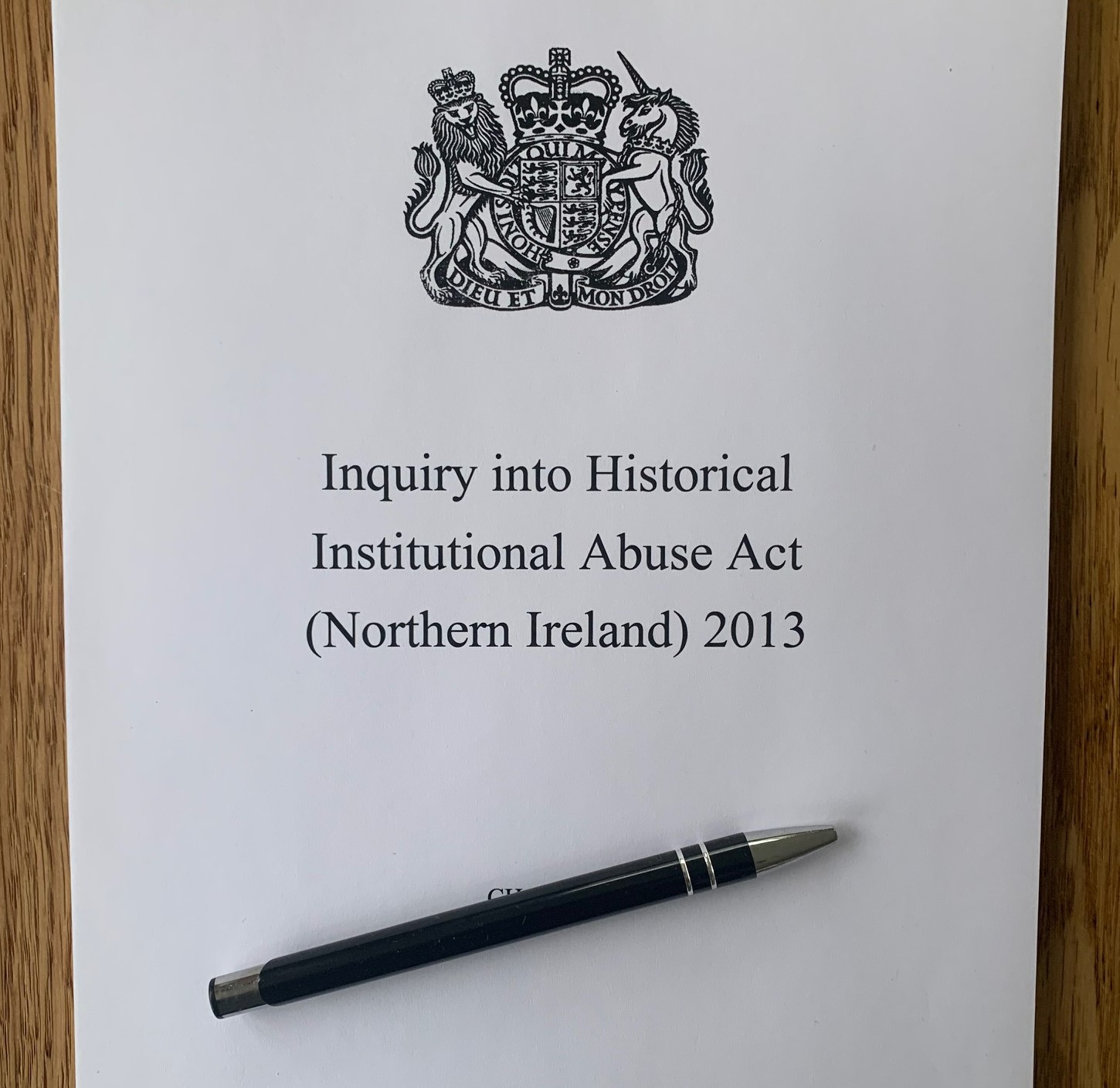 It has been said that we are living in the ‘age of apology’ where apology has become the customary response by political or public figures in times of scandal or crisis. This is evidenced, for example, by the abundance of apologies issued in the wake of the global #MeToo or #TimesUp movements. This broader trend has also been accompanied by what has been termed ‘apology aversion’ or ‘backlash’ where the cultural saturation of public apologies has diluted their significance and impact.

There have been several notable official state apologies for historical institutional abuse (HIA) across the world, including within the Republic of Ireland. At the time of writing, however, survivors in Northern Ireland await a state apology more than five years after the publication of the HIA Hart Inquiry Report (January 2017) which specifically recommended a “wholehearted and unconditional” official apology. It is timely, therefore, to consider whether there can ever be effective apologies for HIA; if so, what might this look like?; and what are some of the key challenges that need to be addressed?

For the past five years (June 2016-November 2021), a team of AHSS researchers at Queen’s has been examining ‘Apologies and Dealing with the Past’ in Ireland, North and South, across three case studies: paramilitary violence; the economic crisis; and historical institutional abuse. This major research project, funded by the Economic and Social Research Council,  involved archival research of public apologies; an interdisciplinary literature review (e.g. across law; criminology; sociology; political science; history; management and communication studies); and extensive empirical research across Northern Ireland and the Republic of Ireland – a public survey; focus groups with the public; and with victims; and semi-structured interviews with key stakeholders, including those involved in constructing, delivering and receiving apologies.

The literature on apologies establishes their broader utility in addressing the legacy of the past and the essential elements which they should contain. Here, the theoretical debates across public law and transitional and restorative justice highlight that apologies may entail both material as well as symbolic reparations. That is, they may work towards restoring the imbalance between victims and perpetrators via the taking of responsibility for wrongdoing; as well as signifying a break with the past. In this sense, an effective apology must have specific acknowledgement of wrongdoing and of victim suffering; be unequivocal and sincere; convey remorse or regret; be given voluntarily and without the expectation of forgiveness; and promise non-repetition. In practice, however, apologies for HIA are highly complex in terms of their perceived effectiveness by individual victims.

Chief among the research findings from the HIA case study was that official apologies have potential value in holding individual perpetrators or organisations such as churches to account. They also have merit in getting the state to take public responsibility for historical wrongdoing carried out in its name; as well as in providing a measure of collective or national responsibility on the part of wider society in being complicit in the wider processes of institutionalisation as ‘bystanders’ and in failing to challenge the authority of the church or state at the time. Above all, however, for survivors, the value of an effective apology for HIA lies in the explicit and unequivocal recognition ‘that it wasn’t their fault’ and that ‘they were in no way to blame.’ In this sense, apologies for HIA are fundamentally about acknowledgement or recognition and the removal of self-blame or ‘shame’ from victims. As a victims’ lawyer expressed it:

Within this context, for many survivors, a true apology is one which ‘names the wrong’ and recognises ‘what was really done’, encompassing all elements of the historical wrongdoing. This includes not only the scale of historical abuses but institutional denial and even cover-up in some cases for decades. Related to this, a core component of addressing the legacy of HIA means recognising not only the abuses, but the broader longer-term and intergenerational impact on survivors. This includes the denial of opportunities for education, as well as the impact on their lives, families and subsequent generations.

A further significant finding was that the performative aspects of apology are highly critical for survivors in establishing the sincerity of the remorse. In other words, the way the apology is delivered is just as essential as the actual words themselves. Many survivors tended to judge the validity of an apology by the degree of emotion expressed by the apologiser which should be ‘from the heart’ and ‘have feeling [and] be humane.’

For other survivors, however, an official apology, no matter how effusive, would be meaningless given the scale and impact of the abuses and the decades-long struggle for recognition of wrongdoing on the part of church and state. Crucially, the open and public display of emotion and remorse by church or state leaders, often apologising decades later for historical wrongdoing by their predecessors, may alleviate victim concerns about ‘third-party’ or ‘surrogate apologies.’ This helps demonstrate sincerity and the taking of responsibility for past wrongs in the present.

However, while important, apologies on their own as a means of addressing the legacy of HIA are not enough. In this sense, apologies without appropriate follow-through mechanisms in terms of tangible redress, such as compensation and policy or law reform, are often seen as just ‘lip service’ or ‘tokenistic’ where ‘words come cheap.’ Effective apologies for HIA, therefore, must contain both backward and forward-looking elements which address past wrongdoing and make clear what will be done to repair the harm and what will be different in future. In this respect, while official apologies often accept a degree of moral culpability and responsibility for historical abuses in broad terms, they have arguably stopped short of accepting legal responsibility and with it, the explicit right to remedy or repair for human rights violations.

An additional point related to the broader evaluation of apologies and their potential to meaningfully address the legacy of past abuses relates to consistency of message and action. Several survivors and their advocates highlighted the potential tension between a public apology for HIA and the surrounding dispute over liability in formal legal settings – for example, where the Catholic Church issues an official apology but subsequently contests responsibility in legal proceedings. Similarly, in relation to the state, an enduring issue for survivors and their families concerns the open and unfettered access to their personal records held by institutions or the state, many of which have been sealed or heavily redacted. Viewed in this context, therefore, effective apologies are perhaps best understood as a process rather than an event where their merits are properly to be judged within the broader political and legal context in terms of everything else that happens before and after the apology.

Intergroup (or collective) apologies for HIA are undoubtedly more complex than interpersonal (or individual) apologies due to a range of factors including the diverse and multiple needs of victims, some of whom are now deceased. Nonetheless, effective collective public apologies for HIA are possible. Here, there are important individual as well as societal dimensions in terms of healing and cathartic benefits for individual survivors as well as broader public recognition of the extent of victim suffering.

Despite the passage of time and the potential barriers to effective intergroup apologies, public apologies for HIA are possible if they attempt to create the relational and human aspects of interpersonal apologies at a broader collective level. At its most basic level, this means demonstrating the sincerity of the remorse, including by follow-on mechanisms of redress, and the tangible ownership of responsibility for wrongdoing.

The findings from this project related to historical institutional abuse have been written up as a series of academic articles and are available to download from Anne-Marie’s staff research page  or on request from the author.

Anne-Marie McAlinden is Professor of Law and Criminal Justice at the School of Law, Queen's University Belfast. She is the author of Children as ‘Risk’: Sexual Exploitation and Abuse by Children and Young People (Cambridge Studies in Law and Society), Cambridge: Cambridge University Press (2018); and ‘Grooming’ and the Sexual Abuse of Children: Institutional, Internet and Familial Dimensions (Clarendon Studies in Criminology Series), Oxford: Oxford University Press (2012).