Arlene Foster: where it all went wrong for Northern Ireland’s first minister

Dr Peter McLoughlin looks at Arlene Foster's time in office as First Minister of Northern Ireland and Leader of the DUP and highlights some of the events that have lost her the support of her party. 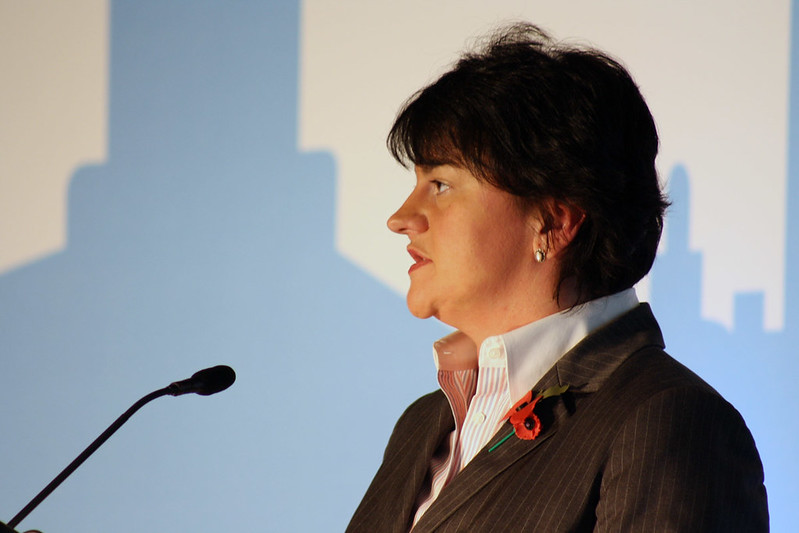 Arlene Foster, Northern Ireland’s first minister and leader of the Democratic Unionist Party (DUP), is to stand down from both roles after apparently losing the confidence of her own party. She will be gone by July, she announced just ahead of a leadership vote she looked likely to lose. The vote takes place every year and has only ever been a formality. But this time her party had turned against her.

Foster was always an unusual Democratic Unionist Party (DUP) leader. She was the first woman to head a stridently patriarchal party. She is a member of the Church of Ireland, while the DUP remains broadly evangelical in its membership. And she was formerly a Ulster Unionist Party member, defecting over David Trimble’s handling of the early peace process.

In her political stance, however, Foster was no mould-breaker. From the outset of her leadership, she looked back rather than forward, constantly citing her own experience of the Troubles and republican violence. In recounting events such as an IRA attack on her own father, Foster’s message was clear – she had neither forgotten nor forgiven, and would certainly not be soft on Sinn Féin.

Her joint leadership of Northern Ireland alongside Martin McGuinness, a former IRA commander, was thus a tense affair, and the relationship broke down after just one year. The immediate cause was Foster’s handling of a scandal over a green energy scheme which wasted more than £30m of tax payers’ money, but a whole series of new tensions emerged between Sinn Féin and DUP while the power-sharing government was collapsed. It would take three years for the two parties to resolve their differences and get the administration up and running again. By then, McGuinness had died, and Michelle O’Neill replaced him as deputy first minister. Foster hardly had a better partnership with her.

It is fair to say that Foster faced unprecedented challenges in her time as DUP leader. But her handling of Brexit is undoubtedly the main reason for her downfall.

She chose to support the Leave campaign in the run up to the 2016 referendum, despite the obvious challenges this would pose for Northern Ireland, and the fact that a majority in the region opposed Brexit.

This was clearly a bad move, but like many, Foster may have thought it unlikely that the UK would really leave the EU. She may have seen supporting the Brexit campaign as a cost-free way to rally supporters behind a familiar cause of defending British sovereignty.

Harder to explain was how the DUP used its position at Westminster in the hung parliament of 2017-19. When the then UK prime minister, Theresa May, lost her majority in the 2017 election, Foster signed the DUP up to support her in a confidence-and-supply arrangement. However, Foster’s MPs went on to repeatedly vote against May’s Brexit proposals, which eventually led to the prime minister being ousted. Her replacement, Boris Johnson, had encouraged the DUP’s intransigence over Brexit, but then abandoned the party by negotiating Brexit arrangements that effectively left Northern Ireland under EU regulations.

Faced with Brussels’ opposition to a “hard border” between Northern Ireland and Ireland, Johnson instead signed a Brexit deal that created a border in the Irish Sea, with goods moving between Britain and Northern Ireland now facing customs checks. For unionists, this undermines the union and their Britishness. The fact that the DUP, under Foster, facilitated this outcome has brought her political demise.

But the DUP’s Westminster policy was not led by Foster, who sits in the Northern Ireland Assembly. Rather it was steered by her deputy, Nigel Dodds, formerly an MP in the London parliament. And it is hard to believe that Foster, herself from a border town in Northern Ireland, did not foresee the particular problems that Brexit posed for such areas. However, over in Westminster, enjoying the full attention of the Tories for a period, Foster’s party colleagues became ever more convinced of the need for a “hard Brexit”. Foster was party leader, so cannot escape blame for the decisions made, but the move against her is clearly a way for other members to disassociate themselves from an approach they pressed for with ever greater vigour.

As the realities of Brexit have become apparent in Northern Ireland, unionist anger has risen, spilling onto the streets in recent weeks. Whilst condemning this violence, the DUP’s only practical response has been to call for the checks on goods to be scrapped. The party offers no viable alternative to an arrangement that took more than four years to negotiate, and it seems unlikely that London and Brussels will make any major changes. Ousting Foster may be an attempt to plot a different course, or just panic in response to polls showing the DUP losing support.

The DUP now faces its first leadership election in its history. Foster’s replacement will have to find a different way forward for unionism in a much changed landscape. The signs do not look encouraging. One candidate is Edwin Poots, who, as health minister, maintained a ban on gay men donating blood after this rule was scrapped in the rest of the UK. As environment minister, he rejected the idea that the climate change represented a crisis, and as a “young-Earth creationist”, he believes the Earth is just 6,000 years old. This hardly suggests that Ulster unionism would be ready to face the future under Poots.

Opponents may scoff, but the beleaguered DUP remains Northern Ireland’s largest party, and the lead voice of unionism. As such, a crisis within its leadership is not good news for anyone in the region.