Dr Paula Devine and Professor Gillian Robinson look at recent findings from the 2016 Northern Ireland Life and Times (NILT) Survey that show that flags, bonfires and other cultural traditions continue to be very controversial. 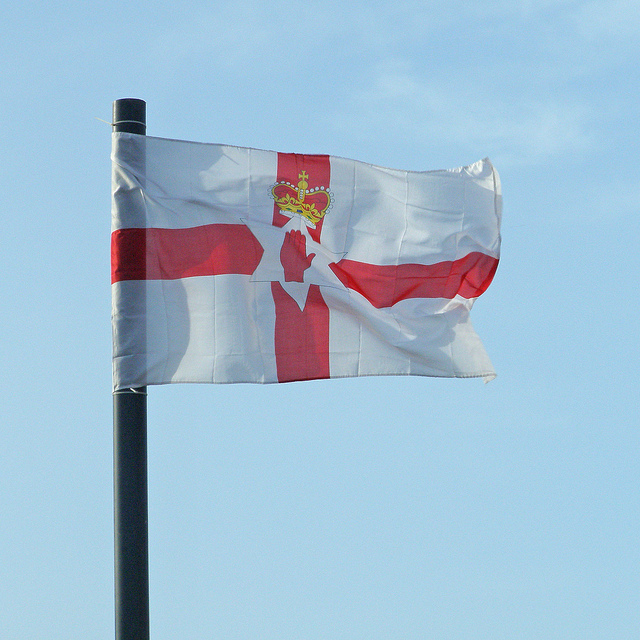 Flags, murals and kerb painting have historically been widely used to mark identity and territory in Northern Ireland.  They have also been very controversial, although this can depend on the flags themselves, the context, the location and who put them up.  Public attitudes to flags on public buildings are often very different to attitudes to flags flying on street lampposts.  This was very evident during the demonstrations after Belfast City Council voted to fly the union Flag on Belfast City Hall on 18 designated days only.

More recently in summer 2017, a Respect Shared Space Rally was held in protest against union and paramilitary flags being flown in mixed housing areas in South Belfast.  In particular, the rally focused on an estate developed specifically as a shared space under the auspices of the Together: Building a United Community community relations strategy.

In their 2016 report Flags: Towards a new understanding, Paul Nolan and Dominic Bryan provide a comprehensive overview of the history of the flags issue, as well as the policy and legal contexts.  One crucial point is that there is no clear or cohesive legislative framework in Northern Ireland to govern the display of flags in public spaces.  Indeed, Paul Nolan and Dominic Bryan have described the issue of flags ‘as a constant irritant on the body politic’ (Nolan and Bryan, 2016, p.14).

Therefore, it is perhaps not a surprise that recent findings from the 2016 Northern Ireland Life and Times (NILT) Survey show that flags, bonfires and other cultural traditions continue to be very controversial.

In the Research Update Bonfires, Flags, Identity and Cultural Traditions, we highlight the level of annoyance at these markers (flags, murals and kerb painting) – 24% of NILT respondents said that they have felt annoyed by republican markers over the last year, and a higher proportion (29%) had felt annoyed about loyalist markers.

As we might imagine, these attitudes vary significantly according to religious and other forms of identity.  One key finding is that negative feeling against loyalist markers is more widespread than against republican markers.  Of course, it is useful to turn these statistics on their head:  two thirds of respondents (67%) said that they weren’t annoyed at either types of markers, whilst 19% were annoyed at both loyalist and republican markers.

Looking specifically at flags on lampposts, opinion is split.  Nearly a half (48%) of NILT respondents support the flying of flags on lampposts throughout Northern Ireland on special dates for particular celebrations, but 34% are against this.  Levels of support vary according to religious affiliation and other forms of identity.  Thus, highest levels of support are from Unionist (69%), British (65%) and Protestant (61%) respondents, whilst Irish respondents are least supportive (34%).

Opinion was also split about whether flags should be taken down straightaway, even if this causes trouble: 45% of respondents agreed with this, whilst 33 per cent disagreed.  Given the lower level of support by Catholic, Nationalist and Irish respondents for the flying of flags on lampposts, it is unsurprising that these groups are most supportive of taking flags down straightaway.

Bonfires have traditionally marked significant events in loyalist and republican calendars, including the loyalist ‘eleventh night’ celebrations in July to herald in the Twelfth of July, and republican events to mark internment in August.  In recent years, and during the summer of 2016 and 2017 in particular, bonfires have created considerable tension in Belfast and Derry~Londonderry.  Key issues include the siting of the bonfires, public safety, the burning of hazardous materials such as tyres, the burning of emblems, flags and effigies, and who should be responsible for any damage or costs incurred.

Therefore, we asked two new questions in the 2016 NILT survey to explore public attitudes towards bonfires.  Responses to the first question were divided: four in ten respondents (42%) agree or strongly agree that bonfires are a legitimate form of cultural celebration, whilst one third (33%) disagree or strongly disagree.  Protestant, Unionist and British respondents are most likely to agree, with highest levels of support among Unionist respondents (67%).  Nationalist respondents were the group most likely to disagree (59%).

However, a question on attitudes to the accountability of bonfire organisers showed almost unanimity.   An overwhelming majority of respondents (86%) agreed that bonfire organisers should be held to account if there is property damage or injuries as a result of their bonfires, and only 5% disagreed.  In stark contrast to the response to the question about the legitimacy of bonfires as a form of cultural celebration, there was little disparity between the religious or identity groups on this question.  This is quite an unusual occurrence in surveys looking at community relations.

The survey findings are very timely, given that the Commission on Flags, Identity, Culture and Tradition (FICT) was appointed on 20th June 2016. The Commission’s task is to take forward a programme of work which includes scoping the issues relating to flags, identity, culture and tradition; mapping the benefits and opportunities in terms of flags-related issues whilst highlighting where challenges remain; and producing a report and recommendations on the way forward.

This is likely to be very difficult given the focus on such contested matters.

Gillian Robinson is Research Director of ARK and Professor of Social Research in the School of Applied Social and Policy Sciences at Ulster University.