Bored of borders already? Building “The Wall” is only the start.

Dr Katy Hayward looks at the growing interest into all things border-related and asks why have borders become the latest political obsession? 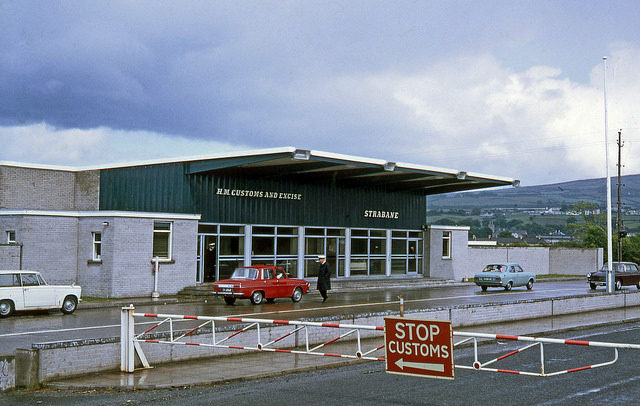 Why is it that, in an increasingly ‘connected’ world, borders are the new political obsession? The evidence is all around: increasingly restrictive visa regimes and immigration controls; protectionist policies and isolationist principles; centre-heavy state politics and rising national populism. In today’s increasingly tense geopolitical and crisis-filled climate, the potential of borders as ‘connection points’ is being rapidly overshadowed by their capacity to divide.

The European Union was founded on the functionalist premise that cooperation across national borders can provide the optimal response to shared problems. Contemporary European societies, however, are increasingly drawn towards policy positions that advocate stronger, higher, ‘thicker’ state borders as a reaction to global challenges – challenges that, by their nature, neither begin nor end at any national frontier.

Official, public and media discourses reflect stark assumptions that the purpose of ‘borders’ is to constrain ‘mobility’ and filter risks – and that failure to do so poses a threat to national cohesion and security. Migration, terrorism, and even the process of globalisation itself are thus commonly presented as threats which require state border-centred responses. In this way, the root causes and systemic problems behind some of the most complex social and economic challenges in the contemporary world are simplified as ‘border issues’.

The stark reductionism of vastly complicated international challenges to problems that can be addressed ‘at the border’ is behind some of the most significant contemporary political developments in the western world. The result of the UK ‘Brexit’ referendum on EU membership in June 2016 and the growing prominence of right wing parties across Europe are evidence that xenophobic rhetoric, protectionist policies and antagonism towards transnationalism have salience here as well as in Trump’s America. Indeed, such is the prevalence of this securitising sentiment in Europe that ‘Build the Wall’ is no mere slogan: it is a practice that is evident across an ever-increasing length of national boundaries. Physical barriers have been erected across thousands of kilometres of state borders in Europe, from Ceuta and Melilla across to Hungary/Slovenia and up to Norway/Russia. After all, efforts to restrict, control and track movement across borders can be a satisfyingly simple (albeit neither a cheap nor effective) way of demonstrating political decisiveness: “You were afraid of strangers and, look, we built a fence to keep them out and put drones in the sky to monitor them.”

‘Borders’, in such rhetoric, are lines of defence and distinction between what ‘belongs’ and what is ‘foreign’ – this can easily spread to encompass goods as well as people. The post-Brexit landscape being envisaged by Prime Minister Theresa May (outside the Single Market and even, potentially, the Customs Union) illustrates how quickly anti-immigration sentiment can leak into restrictions on other types of movement. Such a position demonstrates how the negative association of open borders with risk has much greater political purchase than positive evidence of the benefits brought by cross-border mobility; it also invokes dangerous post-Brexit implications for the contested land border on the island of Ireland.

Borders and the management of borders are at the core of discussions on security at the national, European and global level, generally from a state-centric perspective. But such border-focused practices can only go so far in this ultra-fast, ultra-connected world; investing ever greater amounts on pure forms of border security will never solve transnational problems. If anything, harder barriers increase the stakes for criminal ingenuity – as seen in the increasing temptation for smuggling, which becomes more lucrative as the risks increase. In light of this, border management practices are increasingly manifest away from the border line itself. Border regimes are not just performed at the border but also within the territory of the state through the expansion of data-gathering and surveillance which deepen the effects of state control throughout its jurisdiction. They also have to respond to the transnational nature of the problem. It is notable that the response of the European Union to these broad challenges has been, for the most part, to heighten the rigour and vigour of its own capacity for border management and digital surveillance.

Hence the irony that the Brexit White Paper recognises that cross-border cooperation is essential to securing the UK’s borders.

“As we exit, we will therefore look to negotiate the best deal we can with the EU to cooperate in the fight against crime and terrorism. We will seek a strong and close future relationship with the EU, with a focus on operational and practical cross-border cooperation.” (11.7)

It is notable that the EU initiatives that the White Paper mentions as key priorities for maintaining relate – not to rights or trade or energy or climate change – but to national security and organised crime (e.g. Schengen Information System).

Central to this is the growing capacity to monitor the movement of people through, for example, digital footprints, airline records and e-passport technology. Moreover, across Europe, all routes of regional infrastructure – train connections and train stations, major urban metro stations, overland bus stations, inter-state highways, and public city plazas – are now defined as strategic knots of transit and therefore subject to intensified border enforcement. The EU itself has become like a borderland, with new institutions, actors, rules and techniques that restrict the movement of people and act as means of everyday ‘bordering’.

Border controls are embedded in multi-layered decision-making and administrative practices; as the detailed data on citizens expands, so does the capacity to monitor and manipulate them. Borders are thus best understood not as static lines but as dynamic functional processes. They do not simply exist to protect national societies from external threats, but can be exploited to both mobilize and fix territory, security, identities, emotions, memories, and various forms of national socialization – all for political ends.

And so, we should not be too surprised at the lack of detail in the White Paper regarding the management of immigration, trade and Irish/UK cooperation after Brexit – after all, the point is not really about how borders will be experienced after Brexit, but rather what talk of ‘harder borders’ actually implies. We need to understand that the desire for ‘frictionless’ borders after Brexit will not mean fewer checks or lessened frontiers, but more control experienced in different ways.

Whilst a growing number of people find they are not immune from the ‘hard’ aspects of border control, a shrinking few can truly escape from the ‘invisible’ aspects of bordering: from sign-in sheets in the university lecture theatre, to form-filling by employers, to lists of the home countries of school children. Each one of us can feel the impact of border controls without even venturing near an airport; indeed, many of us may effectively become border agents. The politics and practices of border management are becoming inveigled into everyday life – all on the premise that tighter border security can thwart the effects of global challenges.

In the meantime, the actual causes and impacts of these complex problems go unaddressed. Harder borders make us all the poorer and no more safe.