A Life Time Crossing the Border between the USA and Canada

Guest contributor Daniel E Dullea gives his own personal experience of the border between Canada and the US and how it has transformed from a more soft border to a hard one over the past 20 years. 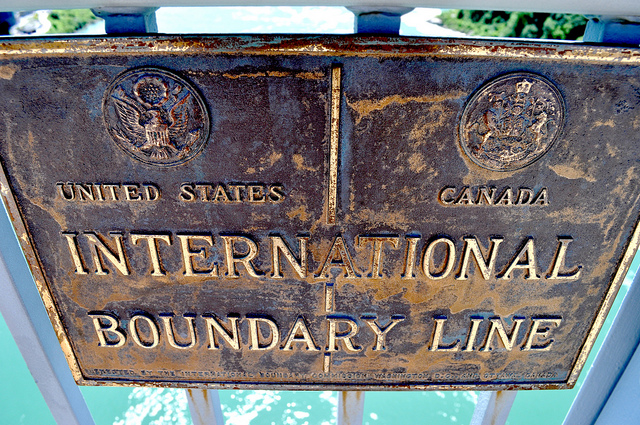 Where I live, the border between the US and Canada has transformed from transparent to locked down in the last 16 years.  This is just the opposite of what has been the experience on your Island of Ireland during the same time period.  People of Ireland should be prepared for the reintroduction of hard border controls that are likely to follow a hard Brexit. You don’t want to go back!

I live in Northern New York State, 20 miles south of the Canadian Border crossing at Massena, NY.  Crossing into Canada is usually not hard but it is a secure border with a full stop and questions.  That part is relatively easy.  The experience is not the same on the way back into the USA… expect a queue and a wait.  Then, you must show your passport, expect to be questioned and possibly have your car fully inspected!

In the late 1970s when we were first married, my wife and I, along with friends, would go canoe camping along the St. Lawrence River in a resort area called “The Thousand Islands”.  The border snakes along and among these islands.  We would cross back and forth into Canada by canoe to go to a favorite bar and then back to our Mary’s Island NY State Park camp site.  At the dock in Canada there was a sign-in book for Americans. That was the border control!   Then came 9/11.  The border locked down.

Now in my county, border control has expanded to include a zone of 60 miles south of the actual border.  The US Border Control Officers set up temporary roving road blocks randomly on highways and secondary local roads.  Everyone passing is stopped, questioned as to who they are, where they are from and where they are going.  If the officer is for any reason suspicious (and racial profiling is rampant), you will be required to show ID and asked to give permission to inspect your vehicle and possessions.  Deny the request and you are more suspect.  You will be detained till a warrant can be obtained.  They will find a reason, valid or not.  Commercial buses, even those that have not crossed the border are routinely stopped and boarded.  Everyone aboard is required to show valid identification.

The train I ride to New York City, I board in the city of Plattsburgh just south of the border.  The train originates in Montreal in Canada and stops for inspection at the border at Rouses Point NY. The train is always at least an hour later then scheduled by the time it arrives in Plattsburgh.

As a boy, I remember learning  in school that the USA Canadian border, more than 3,000 miles long, was the longest unprotected border in the world. This is no longer true and likely to get worse in  Trump’s xenophobic  America.

Daniel E Dullea is an Adjunct Instructor in the Department of Communication and Media at Clarkson University, New York.

If that were to be the case, and it meant no support for World-wide US bases, and foreign interventions from the US, then that can only be a good thing.

However, Trump seems above all to be unpredictable – a recipe for tension, apprehension and disention on a world wide scale.

I agree that the USA has been an increasingly kleptocratic Military/Industrial world empire over the last 75 years.. No better & no worse than Rome or the Once Great Britain! And now certainly even more dangerous to the planet with Trump at the helm. My story is just my humble observations and cautions to others from a life lived by a once friendly and peaceful border that is no more. Thanks for your engaging comments.

This does not seem to be a valid analogy. few would argue that the USA and Canada are not legitimately separate countries (notwithstanding that some in the USA seem to regard CANADA as the 51st state0.). Quite tight border controls now seem to operate on the Canadian side as well. reasonably enough considering the extent to which the two nations differ on (e.g.) gun control.

Northern Ireland is, in contrast, viewed by many in Ireland as an unfortunate anomaly, soon to be politically absorbed in the rest of Ireland – and of course in the EU. In those circumstances border controls take on an different dimension, whichever side of the national divide you are on.

You are right regarding America’s obsession with guns and add stupidity over healthcare. But there are some parallels. All four places were once colonies. Two, the USA & Ireland fought to be independent while each of our respective neighbors, Canada & NI embraced their master Great Britain. But the tides of history wash back and forth across borders profoundly affecting the local people living peacefully with their neighbors. That is till the next flood tide brings innocent refugees or others that cross with ill will and bad intentions (remember the Saudi’s of 911). I hope you are right about NI. Thanks for your thoughtful comment.

From a recent tv programme in the uk it showed that in one part of the border it goes Down the middle of the road, through the library building and various others so there is not total lockdown. Due to a longstanding agreement between ireland and the uk (pre eu) passports arent necessary and i travelled without one except on ryanair which insists on a passport. I was only stopped Near the border in later years due to the terrorist threat. The government could still retain a seamless border if they think outside of the box as they say