Unpaid carers play a vital role in supporting the health and social care system in Northern Ireland. Paula Devine and Ann Marie Gray from the Ark Ageing Programme ask if this is the sort of care that people really want and call for a more fundamental review of future provision. 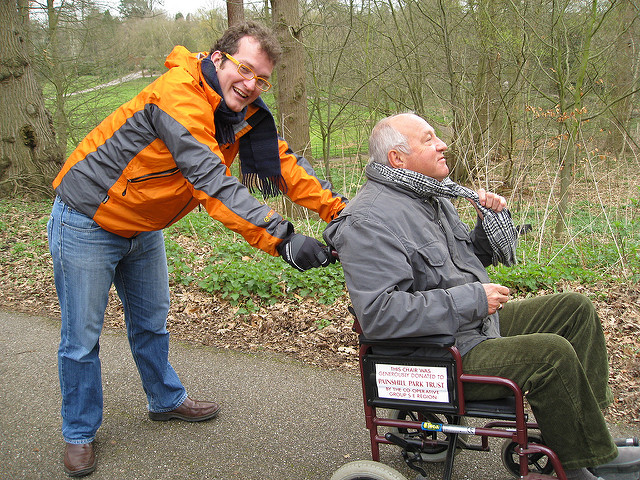 Unpaid carers play a vital role in supporting our health and social care system. In Northern Ireland, the economic value of this care is estimated at £4.6 billion per year (‘Valuing Carers 2015’) – a figure similar to the entire 2016/17 Stormont health budget. The expert panel on health and social care (2016) acknowledged that unpaid carers are by far the largest group delivering care services in Northern Ireland.

Comments by David Mowat, Minister for Communities, Health and Care, to the House of Commons’ select committee on communities and local government on 30 January received much publicity:

“We need to start thinking as a society about how we deal with the care of our own parents. One of the things that has struck me as I’ve been doing this role is that nobody ever questions the fact that we look after our children, that’s just obvious. Nobody ever says it is a caring responsibility, it’s just what you do. I think some of that logic and some of the way we think about that, in terms of the sort of volume of numbers that we are seeing coming down the track, will have to impinge on the way we start thinking about how we look after our parents.”

Social policy has long assumed a preference for family care among care users, and an unpaid care workforce able and willing to provide increasing levels of care. But is this desirable or feasible? In 2015, the Northern Ireland Life and Times (NILT) Survey asked a representative sample of 1,202 adults living across Northern Ireland, about their experience of providing unpaid, or informal care to someone.

Do David Mowat’s comments imply that people are not already looking after their parents? Our analysis of the NILT data found that 17% of respondents are carers, in that they look after or give special help to someone who is sick, disabled or elderly. This is higher for women (21%) than for men (13%).

The vast majority of support was given to family members: parents or parents-in-law (44%), spouse or partner (29%), child (10%) and other relative (13%). This means that a very sizeable proportion of NILT carers are already looking after their parents. One common perception is that older people receive care provided by younger people. Among NILT respondents, however, 16% of respondents aged 65 years or over are carers. Of these, one quarter were caring for their own parent/parent-in-law.

What about the parents?

Can we presume that parents want to be looked after by their adult children? The NILT survey asked respondents aged 50 years or over what they would prefer if they needed help with personal care in future. Just over one quarter (28%) said that they would prefer their own children to help them. However, 33% said they would prefer care assistants coming into their home; 23% would like help from other family members or friends, with 10% saying they would prefer to move to a nursing home. So it is not a clear cut issue.

What about the children?

David Mowat’s comments assume that everyone has an equal opportunity to be cared for by their children. There are a number of problems with this. Successive generations are less likely to have children. ‘The Generation Strain: Collective Solutions to Care in an Ageing Society’ report suggests more than a million people aged 65-74 years will not have children to care for them in old age, almost double the figure in 2012. At the same time, not all children are willing, or in a position, to provide the care that’s needed. Labour market and other forces mean that children are less likely to live close to their parents, thus reducing their availability for care in future years. In addition, caring is often a major commitment with implications for the health and financial wellbeing of carers.

One in four carers (25%) identified within NILT provide at least 35 hours of care, which we can think of as being equivalent to a full-time job. Significantly, 35 hours is the threshold above which carers may be eligible to apply for a Carer’s Allowance (CA). Setting aside debates about the adequacy of this, recent changes to social security benefits may impact on carers. They could lose their CA if the person they are caring for loses entitlement to their disability benefit as a result of the reassessment for the new Personal Independence Payment. That does not mean that the person no longer requires their care. In Northern Ireland, measures in place to ameliorate the impact of welfare reform mean that carers affected will receive a supplementary payment to cover their financial loss, but only for a year.

The impact of caring

Among NILT carers, the most frequent stressor was tiredness (73%), followed by emotional pressure (64%). Other pressures (financial pressure, feeling of having no life of your own, and pressure in other ways) were identified by at least one in four. This corroborates findings within Carers UK ‘State of Caring 2016’ report. The NILT data also reflects the multiple types of stress that carers face – one in four carers identified at least three types of pressure.

Providing care, therefore, is not a role that can be assumed to lie mostly with families. There is no easy answer. The historic policy neglect of adult social care and sustained underfunding means that we now need a more fundamental look at future provision.

The debates will continue for some time.