Changed Lives: Voices from 9/11 in the Classroom

In the second of our 9/11 anniversary commemoration articles, Professor Joe Duffy shares his experience of working with some of the survivors of that tragic day. 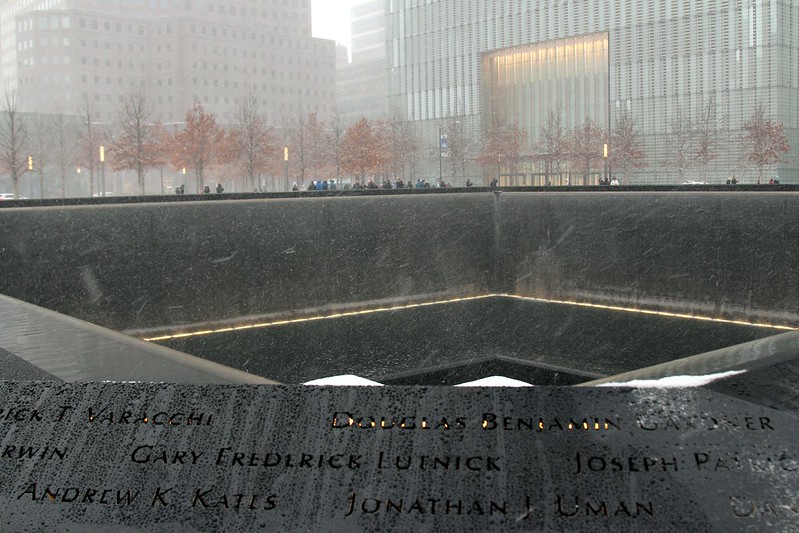 For many years in Northern Ireland, I have been working with groups and individuals directly affected by ‘the Troubles’ bringing their lived experience of injury, bereavement and trauma to the heart of the social work classroom. This experience would help me greatly while on a Fulbright Scholarship to America in 2018/19 when I had the privilege to work alongside individuals directly impacted by the terrorist attacks on the World Trade Center on September 11, 2001.

For three weeks in February 2019, seven people, previously unknown to each other, shared their very personal, moving and traumatic experiences of 9/11 with a group of social work students at New York University’s Silver School of Social Work. One student would describe the classroom experience as “probably one of the most powerful learning experiences that I have had at NYU”.

Twenty years later, as we reflect on the enormity of what happened, I will focus on the stories of some of the people, who went to work on an average day in September, but whose lives would be changed forever, separating life into ‘before’ and ‘after’ what became monikered as 9/11. Here, I reflect on the processes involved in helping prepare people to share their very personal experiences with social work students from NYU, whose campus ironically is situated very close to where the attacks took place.

For some, this was of immeasurable importance, having not yet been able to revisit the actual physical location in Lower Manhattan since the day of the attacks. This blog will recount the preparations I undertook, explain the teaching methods before going into the classroom setting and reflect on the learning outcomes for the students. You will also hear the personal reflections from William Raff, one of the survivors’ group who took part in the teaching.

For several years, I have worked closely with Brendan McKeever, a user researcher from Northern Ireland, who helped me pioneer some innovative teaching approaches involving service users, one such approach we termed ‘the Conversation’. This method involves using a number of pre-agreed questions as the basis for structured dialogue in the classroom setting and considered to be the most appropriate when dealing with highly emotionally challenging topics.

This technique was used with the seven participants who would share particular aspects of their lived experience of 9/11 with the social work students. Working closely with the World Trade Center Survivors’ Network, I was able to connect with a group of individuals who were working in the Towers that day and also with people from the emergency services who responded after the attacks. All ordinary people going about their lives and doing their everyday jobs.

I knew from the beginning that trust building was at the heart of this process. I was indeed mindful of this throughout, where would I start in terms of asking people to share such difficult and personal experiences? The answer was to start with the people themselves and to create a safe environment where people felt valued and respected.  In planning, we met as a group over a number of weeks and decided how the programme would evolve. Every aspect was therefore co-produced and together we agreed the following questions as the basis for the Conversation:

The 90-minute classes ran for three consecutive weeks with two/three group participants joining me each week with the students. The students listened attentively and respectfully to the dialogue and there was total silence in the classroom, such was the emotional magnitude of the atmosphere. After each class we gathered for a coffee at a nearby café which helped the group support each other and reflect on what we had learned from the process.

These relationships I value dearly. I still keep in touch, especially at this particular time of year. I feel very honoured to have experienced working with such an inspirational group of people who openly shared the most personal aspects of their lives and in doing so made an indelible mark on the NYU social work students as can be seen from a sample of their quotes below:

“I learnt that although the 9/11 survivors experienced trauma differently, they all seemed to indicate that the experience of trauma becomes a lens through which they viewed the world. They seemed to perceive life differently after that experience.”

“The most important thing I learnt was the importance of listening and not making assumptions about their experiences and circumstances.”

“This learning experience has dramatically changed my perspective on trauma. It was the first time that I was able to hear a story of a traumatic experience directly from the person. It was moving and educational to see their body language and nonverbal communication and behavior as they told their story.”

“I see that people who have experienced trauma don’t work through it and get back to the life they had before. Instead their lives become divided into before and after.”

The  following is an extract from William Raff’s experience.

“Prior to 9/11, extreme trauma of any kind was not part of my own lived experience.  But 9/11 changed that, starting at that moment when I decided to evacuate from the 82nd floor of the South Tower just after Flight 11 struck the North Tower at 8:46 a.m.  I experienced physical shock, and a surreal awareness: I knew what had really happened in a rational sense, but I could not process it emotionally. I realized later that processing the experience, and expressing my deep emotions was the key to overcoming the intensity of the trauma.  That process is ongoing, and continues even today, and especially as the 20th anniversary of the attacks is near. It compels me to think about what happened, to talk about it, and to learn and read 9/11 history as much as I can.

In the weeks and months that followed the attack, I sought counseling through a private provider, and my company held a group session.  Neither had a very beneficial effect, as I recall.  Then, I joined a disparate group of some of those most affected by the attacks. As I listened to other participant’s stories, I realized how the experience of the attack had deeply affected their own individual capacities to go on experiencing life, and enjoying pleasure without fear, anger, and even hate.  I realized that those negative qualities were not acceptable for me. I left the group, and ventured on my own to deal with the demons that entered my life on September 11th.  I realized that speaking about my own experience felt good, even if others were not listening, and that the best way to confront my own demons was to face them, re-experience what happened to me in my own mind, and to talk about it.

My own progress continued for years, and every 9/11 anniversary provided an opportunity to “check in” with my most intimate feelings.  Such feelings continue to elicit a powerful emotional response and inevitably tears, as I recall the details of what happened that day, the senseless killing of so many innocent victims, and the bravery of the first responders who put rescuing others ahead of their own concerns.

Shortly after 9/11, my own life began to return to a “new normal,” and my professional life resumed.  Years later, when I was fortunate to meet Dr. Duffy, his work became a new avenue to further help me understand and cope with the nature of the trauma that remained within my psyche.  Dr. Duffy was concerned with education; and specifically, teaching graduate students at NYU’s Silver School of Social Work.  He found others who were part of history; those whose lives were directly affected by their 9/11 experience to share with the NYU students.

It was startling to me how effective was the technique of relating history by those who were part of it.  The students seemed to develop an almost first-hand sense of the experience that will, in turn help them deal with future patients who have been traumatized. Learning and thinking about overcoming trauma has been an important aspect of how I’ve learned to do so for myself.  Now I realize how social workers’ awareness of 9/11 trauma can provide them with a powerful skill to deal with their patients’ trauma through purposeful listening, providing support, and guidance.”

The featured image of the 9/11 Memorial has been used courtesy of a Creative Commons license.

Joe Duffy is a Professor in the School of Social Sciences, Education and Social Work at Queen's University Belfast. Joe's research interests are in the areas of service user and carer involvement, social inclusion, citizenship based social work, social justice and the interface between social work and political conflict.

This is important, groundbreaking academic work. But, on a simple human level, it is also affecting and moving. Professor Duffy and everyone involved, especially THOSE survivors who opened up their HEARTS to help others, deserve our gratitude.