Putting a price on language: the debate around the cost of an Irish language act

In the second of two articles, Deirdre Dunlevy and Professor Mícheál Ó Mainnín look at the cost implications associated with the debate around an Irish language act for Northern Ireland. 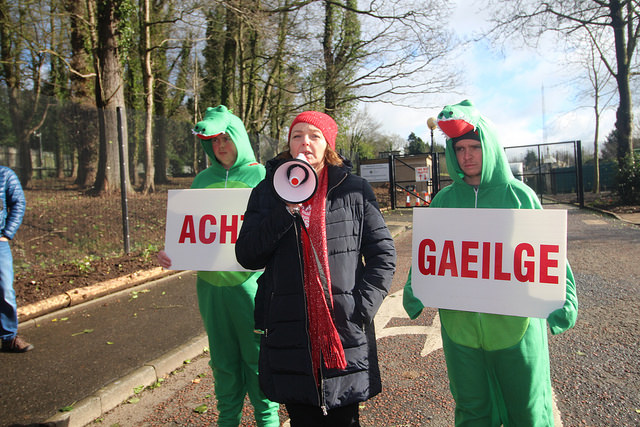 In seeking to form a new devolved government at Stormont, the question of legislative support for the Irish language through an Irish language act is one of a number of core issues, a situation without precedent since the creation of Northern Ireland. A key issue in terms of selling any agreement to the wider community is the impact an act would have on ordinary citizens. Here, we address the apprehension about the financial cost of an act, an issue that has been hotly disputed in recent weeks.

Language legislation is employed throughout the world for the protection of minority languages and improvement of their status, particularly in contexts where a minoritised language is in contact with a dominant, global language, such as English. The recognition of Irish through the implementation of an Irish Language Act in Northern Ireland would be an extension of British rights already established elsewhere in the UK. The other devolved administrations of Scotland and Wales have language acts supporting Scottish Gaelic and Welsh; this has not caused (or sustained) deep political divisions in either region. It would also mean Northern Ireland would no longer be in breach of national and international agreements regarding language rights.

A Language Act provides the legal foundations on which the capacity of a minoritised language can be built. By normalising the presence and acceptance of a language in the public space, it reduces the stigma attached to the language and enhances its prospects for revitalisation. The introduction of an Irish Language Act would also have important implications for equality of opportunity in terms of ownership of the language. All citizens would have access to the language and would be enabled to engage with it to the extent that they so desire (or not at all). This self-empowerment could lead in turn to greater tolerance and confidence in a diverse identity (and to enhanced personal and societal well-being).

Legal protection of a language helps to remove it from the domain of confrontational party politics. A continued lack of consensus over rights, on the other hand, sustains the politicisation of the language and inhibits progress on the Northern Ireland government’s shared space agenda. Through the acknowledgement of a shared and diverse heritage, the language can be protected and opened up to the whole community regardless of individual political affiliation (and without anyone having to compromise on that).

One of the most fiercely contested elements of the debate regarding the introduction of an Irish Language act has been the issue of expense. The analysis of potential cost is complex; as an Irish Language Act would affect a number of government departments, any costs associated with an Act would not fall on any one department to cover (as we know from previous experience in Scotland and Wales).

Also, without any agreement amongst politicians as to what an Act may contain, it is difficult to speculate over exact costings. Both Pobal, an umbrella organisation for the Irish-language community in Northern Ireland, and Conradh na Gaeilge have published proposals as to what should be contained in an Irish Language Act. The Conradh na Gaeilge proposals also include the costs of implementation which they estimate to be approximately £19 million over the first five years, plus an annual implementation cost of approximately £2 million. However, Pobal has suggested that these costs may be a conservative estimate.

The majority of costs involved in the implementation of new language strategies associated with the implementation of an Act would be tied up in departments that are already funding the same resources, but through the medium of English, such as education. In communities with long-standing bilingual policies, such as Quebec, it has been seen that the cost of providing services and resources in the minority language ‘is quite low due to the quasi-absence of education-related costs’.

In the medium to long term, education costs are not deemed to be higher due to bilingual policies as the provision of such services is necessary regardless of the medium of education. In Northern Ireland, such costs exist already, including provision for Irish-medium education, and so most proposals envisioned for an Irish Language Act would not add a significant burden to the budget.

Some new provisions would be necessary within the budget, but the majority of these would not require extra funding other than funding for appropriate resources (post initial set up costs). For example, there has been much discussion regarding the replacement of current official signage with bilingual signage. Following the examples of both Wales and Scotland, this could be implemented over a period of years and carried out on a needs basis. As signs require replacement, the bilingual signs would be installed as appropriate. As such, little extra cost would be involved (other than the linguistic expertise required in providing translations) as the usual production and installation cost would be necessary regardless of the languages on the sign. Belfast City Council currently quotes the cost of bilingual signage to be between £100 and £200 per sign.

In their proposal for a language act, Conradh na Gaeilge cited the cost of establishing and running a translation unit, responsible for the translation of official documents as required, to be £100,000 for initial set-up, and £500,000 per year. Similar translation units in the EU run at €23 million per year, covering 24 official languages, a cost which has been equated to roughly €3 per citizen per year.

While these estimates are more complex (as they include the finances of the entire unit, not just the translations), they indicate that, while the establishment of a translation unit would incur a significant initial set-up cost to the exchequer, the subsequent running of such a translation unit would be much more economical. As city councils move to more paperless communication, and rely more on websites and electronic correspondence to communicate with the public, costs will reduce as the need for the printing and distribution of such documents diminishes.

One further factor which is difficult to quantify is the potential additional income generation from an Irish language jobs economy, e.g. in the media and in tourism. It is believed that economic activity involving the Gaelic language is adding to the economy in Scotland and the same impact might be expected here with the development of the Gaeltacht Quarter in Belfast.

Language rights can be grounded in the right to freedom of expression, the right to non-discrimination, and the right to freedom of association and assembly; accordingly, the right to use an indigenous language in public life may already be enshrined in basic human rights. The establishment of an Irish Language Act would enhance these rights in Northern Ireland; consequently, the consideration of any legislation is difficult to dismiss on financial grounds alone.

An Act will do more than protect and support speakers of Irish in what is a diverse and divided society; it will also protect those who are indifferent to it and those who do not wish to engage with the language. It will provide services for those who wish to avail of them, i.e. a parallel service, not one which replaces existing services. It should not place any obligations on individual citizens in terms of having to learn Irish nor should it allow any room for discrimination in terms of employment.

Furthermore, a Language Act is not a solution to all language issues, nor can it contribute to the revitalisation of a language in the absence of some sense of obligation on its speakers who must choose to use the services it makes provision for.

Mícheál B. Ó Mainnín is a Professor of Irish & Celtic Studies in Queen’s University Belfast. His primary research interests are in Irish and Scottish Gaelic language and literature, particularly in language and identity, name studies, and the literature of the medieval and early modern periods.

Deirdre Dunlevy is a Research Associate on Strand 3 of the MEITS project, which explores sociolinguistic perspectives of multilingualism, focussing particularly on issues of identity, diversity and social cohesion in Northern Ireland.

1. Why does this site not accept lower case text? Is it designed to make all critics look like loons?

2. I came looking for an objective assessment. I find what seems to me the antithesis: selective choice of figures. To take just one example, you pray in aid “translation units in the EU run at €23 million per year…which has been equated to roughly €3 per citizen per year”. What relevance does the €3 figure have? You might equally – or perhaps better – say that is very nearly €1 million per year for each of the EU’s 24 official languages

Thanks for your comment. The €3 per citizen per year figure was used in order to contextualise the costs. The budget in the EU is not split evenly across all the languages, as the more dominant languages, for example, have larger units and not all documents are translated into the smaller languages. As such, equating €1million per year for each language would be misleading.