Professor David Phinnemore takes a closer look at the democratic consent mechanism that the UK government secured as part of the revised terms of withdrawal agreed in October 2019. 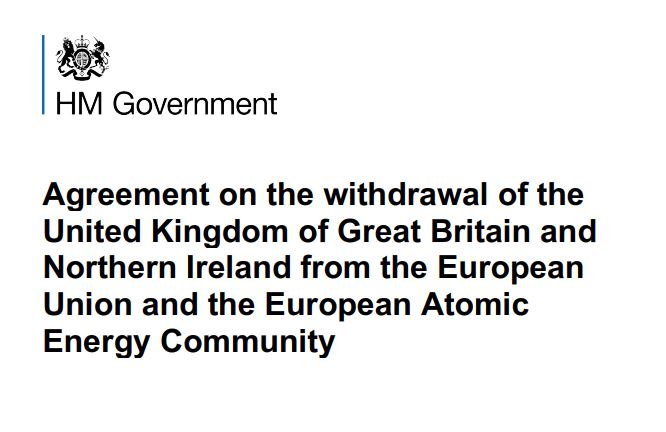 With Boris Johnson’s election victory, the United Kingdom is for the first time since the 2016 referendum firmly on course to leave the European Union (EU) on the basis of agreed terms. The Withdrawal Agreement concluded in October 2019 is now expected to enter into force at the end of January 2020 and 47 years of UK membership of the EU will come to an end.

For Northern Ireland, the Withdrawal Agreement will see differentiated arrangements enter into force at the end of the transition period which will follow withdrawal. This could be as soon as 1 January 2021. These arrangements, contained in the Protocol on Ireland/Northern Ireland, will see Northern Ireland in effect remaining in the EU’s single market for goods – including agricultural goods – and its customs territory.

Key areas of EU legislation will continue to apply in Northern Ireland and so there will be no additional checks or controls on the movement of goods across the land border with Ireland. There will, however, be increased checks and controls – and potentially tariffs – on the movement of goods between the rest of the United Kingdom and Northern Ireland. There will also be continued regulatory alignment to ensure the operation of the single electricity market on the island of Ireland and the EU’s VAT, excise and state aid rules will continue to apply in Northern Ireland.

Such a differentiated relationship with the EU for a significant part of a non-member state is unprecedented. It is also controversial. Businesses in Northern Ireland and elsewhere in the United Kingdom have expressed concern over the additional costs that increased checks and controls on intra-UK trade will entail. And many unionists oppose the Protocol fearful that it further undermines Northern Ireland’s position in the United Kingdom.

As a result of unionist scepticism towards differentiated treatment of Northern Ireland, the Johnson government sought and secured a ‘democratic consent’ mechanism as part of the revised terms of withdrawal agreed in October 2019. The mechanism allows members of the Northern Ireland Assembly (MLAs) to decide before the end of the fourth year of the Protocol’s operation – and regularly thereafter – whether key provisions of the Protocol should continue to apply. The choice of every four years was to ensure that unless MLAs decided otherwise, each Assembly would hold a vote.

The democratic consent provisions were inserted into the Protocol following demands from unionists that the absence of a consent mechanism would breach the spirit, if not necessarily the letter, of the 1998 Belfast ‘Good Friday’ Agreement. Others were less convinced.

However, with Johnson adamant that the ‘undemocratic backstop’ arrangements agreed by his predecessor, Theresa May, had to go, not least to secure the support of the Democratic Unionist Party (DUP) for a new deal, some form of consent mechanism was deemed essential.

What was ultimately agreed (see Figure 1) certainly drew on the Johnson proposal, but differed in several important respects, most evidently in not including an initial consent vote prior to the full entry into force of the Protocol. Instead, the differentiated arrangements for Northern Ireland will apply automatically from the end of the transition. 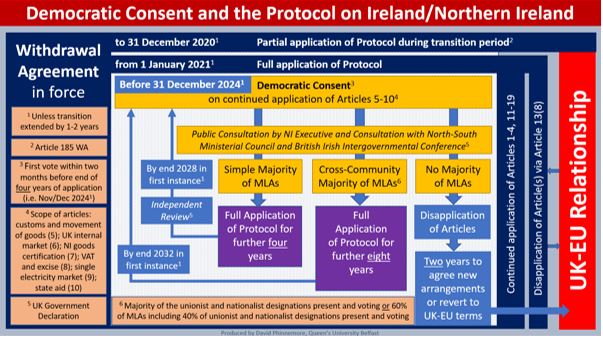 Only towards the end of their fourth year of the Protocol’s operation will MLAs vote on whether its provisions on customs and the movement of goods, VAT and excise, the single electricity market and state aid (Articles 5-10 Protocol) should continue to apply in Northern Ireland. The vote will be on the articles collectively, not individually.

Assuming there is no extension to the transition period – prior to the end of June 2020 a decision can be taken to extend for one or two years – the first vote will take place in November or December 2024.

If MLAs vote against the provisions’ continued application, then those provisions will lapse after two years, not one year as the UK had proposed. As far as the UK Attorney-General is concerned, there is no question that they would be disapplied at the end of the two year period; the EU would have no legal basis to assert that without the consent of MLAs they should continue to apply.

In the meantime, the United Kingdom and the EU will take ‘necessary measures’. This could entail replacement arrangements ‘taking into account the obligations of the parties to the 1998 Agreement’ or Northern Ireland reverting to the terms of the UK-EU relationship which would be the default. It could also involve re-application of selected provisions, e.g. on maintaining the single electricity market.

Depending on the nature and scope of the UK-EU relationship, disapplying Articles 5-10 could – and currently given UK government policy indeed would – result in the re-imposition of checks and controls on the movement of goods across the land border on the island of Ireland. There would be a hardening of that border, exactly what the Protocol was designed to avoid.

If MLAs vote to maintain the application of the Protocol, then depending on how they vote they would have a further vote either four or eight years later (see Figure 2). If the vote in favour of continuing to apply the Protocol is a simple majority of MLAs, then the next vote will be four years later (so 2028 assuming no extension to the transition period). If, however, there is ‘cross-community support’ within that majority, the next vote will be eight years later (e.g. 2032). 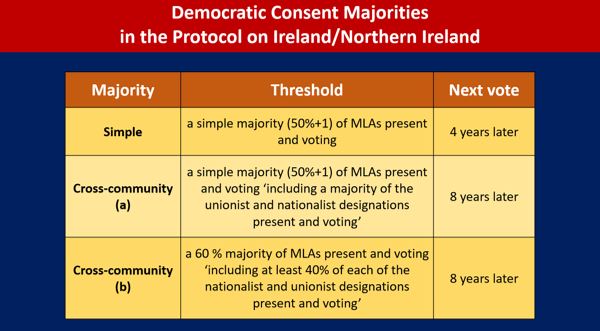 All this is set out in Article 18 of the Protocol. However, it needs to be read in conjunction with a unilateral UK government Declaration concerning the operation of the Protocol’s democratic consent provision. It contains two important additional stages, both of which, along with other commitments, will be set out in UK legislation in due course.

The first additional stage is public consultation in advance of each democratic consent vote. Here the UK government wishes to achieve the broadest possible agreement on whether Articles 5-10 should continue to apply or not. To this end it is envisaged that the Northern Ireland Executive will conduct a ‘thorough’ process of public consultation which ‘should include cross-community consultation… with the aim of achieving broad consensus across all communities to the extent possible’.

Hence, the UK government will support as appropriate the Northern Ireland Executive in consulting with ‘businesses, civil society groups, representative organisations (including of the agricultural community) and trade unions’. It is also stipulated that the North South Ministerial Council and British-Irish Intergovernmental Conference should be involved in any consultation process.

The second additional stage applies if MLAs have voted for the continued application of Articles 5-10 but only by a simple majority and not with cross-community support. In such a case, the UK government will commission an independent review into the functioning of the Protocol and specifically ‘the implications of any decision to continue or terminate alignment on social, economic and political life in Northern Ireland’.  The review is to involve ‘close consultation’ with political parties in Northern Ireland, businesses, civil society groups, representative organisations (including of the agricultural sector) and trade unions. It will conclude within two years of the MLA’s democratic consent vote and make recommendations ‘including with regard to any new arrangements it believes could command cross-community support’. Who will undertake the review is not specified.

Despite these additional stages it will ultimately be for MLAs to determine whether Articles 5-10 continue to apply. If the Northern Ireland Assembly is functioning, then it will be the responsibility of the Northern Ireland Executive to provide the necessary motion on which MLAs will vote. If the Executive fails to propose a motion, the UK government plans to allow the motion to be tabled by an MLA. This should ensure that a democratic consent vote is not blocked by a lack of Executive or lack of Executive agreement on a motion.

If no motion is forthcoming from an MLA, the default position is that Articles 5-10 continue to apply; the UK government is only obliged to ‘provide the opportunity for democratic consent in Northern Ireland’ (Article 18(1) Protocol, emphasis added). A democratic consent vote is not obligatory.

The UK government is also envisaging contingency arrangements for if the Assembly is not functioning. In such a case the UK government will arrange a vote of MLAs. It will also provide support for MLAs to consult with businesses, civil society groups, trade unions and other representative groups.

The provisions on democratic consent are unprecedented as far as any agreement concluded by the EU is concerned. They also represent a significant concession on the part of the EU whose negotiators were wary about including a democratic consent mechanism in the Withdrawal Agreement. What made inclusion easier to accept was the shift in the nature of the Protocol.

Originally designed as providing ‘backstop’ arrangements in case the future UK-EU relationship fails, among other things, to avoid a hard border on the island of Ireland, the Protocol now contains provisions for potentially permanent arrangements for Northern Ireland.

Although agreement on the democratic consent mechanism allowed Johnson to claim that the backstop had been abolished – although he conspicuously failed to describe it as anti-democratic – the mechanism is not without its critics, notably in Northern Ireland.

Indeed, despite Johnson’s assertion that consent was now ‘a fundamental element of this new deal’, the nature of the consent mechanism was not to the DUP’s liking. Nigel Dodds, the then DUP leader in the House of Commons, bemoaned the lack of ‘up front’ consent before the Protocol enters into force and maintained that the revised Protocol ‘drives a coach and horses through ​the Belfast agreement by altering the cross-community consent mechanism’.

Launching her party’s manifesto for the 2019 general election, Arlene Foster echoed Dodds’ position, arguing that the consent mechanism ‘goes against the Belfast Agreement’ because continuation of the Protocol does not require the consent of a majority of unionist and nationalist MLAs.

It is not the case, however, that the democratic consent mechanism alters the cross-community consent mechanism in the 1998 Agreement; it simply does not apply it to the Protocol. Instead, a dedicated mechanism has been agreed that ensures that neither unionists nor nationalists have a veto over the continued application of Articles 5-10.

This raises the question as to the likelihood of consent being granted or withheld in 2024 or at one or more later dates. Future decisions will for many – if not most – MLAs be based on experiences of whether the Protocol’s arrangements for Northern Ireland work or not.

If the ‘lived experience’ is unsatisfactory, consent may be withheld. However, given the prospect that voting against the continued application of Article 5-10 would certainly result in a harder land border, MLAs opposed to the Protocol are likely to struggle to convince a majority of their fellow MLAs to oppose consent. At present, there appears to be little expectation in Brussels that consent will be withheld.

This does not mean that Articles 5-10 or indeed the Protocol as a whole necessarily establish a permanent set of differentiated arrangements for Northern Ireland in the UK-EU relationship. They can all, as with the original ‘backstop’ version of the Protocol, be disapplied through the future UK-EU relationship (Article 13(8) Protocol), provided that relationship delivers on the commitment ‘to address the unique circumstances on the island of Ireland, to maintain the necessary conditions for continued North-South cooperation, to avoid a hard border and to protect the 1998 Agreement in all its dimensions’ (Article 1(3) Protocol).

Whether the UK and the EU, primarily because of UK preferences for the future relationship will reach such a point remains to be seen. At present, it seems unlikely. The democratic consent mechanism is therefore set to play an important role in legitimizing – or not – the differentiated arrangements for Northern Ireland provided for in the Protocol. MLAs will have an important decision before them in either late 2024, 2025 or 2026. Whether that will be the only occasion when they will have to take the decision remains to be seen.