Dr Katy Hayward looks at a new report on Brexit, the Protocol and the governance challenges they pose for Northern Ireland 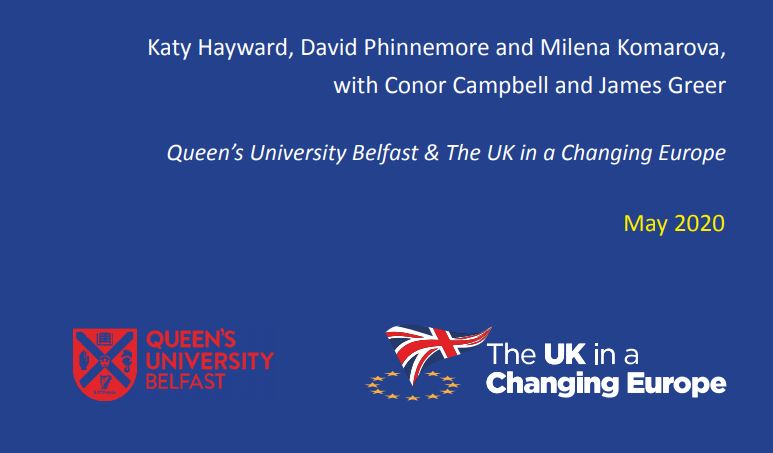 One of the promises (if that is not too strong a term for it) offered by the British government was that Brexit would mean ‘taking back control of our borders, money and laws’. This was a claim that resonated across the UK – including in Northern Ireland. Even in the most rural areas at the edge of the UK, pro-Leave voters in the Irish border region expressed hope that Brexit would mean “the re-establishment of full parliamentary democracy”. That the UK would be “sovereign and independent again”. That laws could be made closer to the people, not by “faceless and uninformed and uninterested” bureaucrats.

A reason why the UK Government is so keen to avoid an extension to the transition period is because transition means the UK is still following the EU’s laws whilst having given up its capacity to shape those laws. If its capacity to shape EU laws felt inadequate before, now it is pretty much non-existent. Come 1 January 2021, EU laws in principle will not apply, even though the vast majority of them will still be there in the form of national replicas. But from that point, divergence can commence apace. And over time, as it choses – or as determined by what it manages to negotiate with other large countries – the UK can set its own laws.

I say ‘UK’, but that is somewhat misleading. A part of the UK will continue on very much as rule-taker from the EU. Whatever it will be constitutionally or de jure, de facto Northern Ireland will be following the EU’s rules and regulations on swathes of legislation.

This can be spun as a positive – Northern Ireland is in a unique position to benefit from frictionless access to the single market of the EU for free, avoiding a hard border, benefiting from rights protections in certain areas… But, notably, this has only been spun as a positive by those who are wary (e.g. other EU member-states) and by those who are, for other reasons, irritated at the UK government’s handling of Brexit especially as it relates to the devolved authorities (e.g. the Scottish Government).

For the most part, those within Northern Ireland – pro-Leave, pro-Remain, and the fed-up-with-it-altogether – are not seeing this position as a positive. Even those who would like to imagine that this sets the region on an even shorter ladder to a united Ireland are somewhat uncomfortable with the implications of the Withdrawal Agreement Protocol in the meantime. Without remedies, Northern Ireland’s rule-taking position sits uneasily with any notion of good quality, fully-functioning democracy.

Northern Ireland will be following EU rules with no means of shaping those rules. And powers that have been ‘repatriated’ back from Brussels come in the first instance to London. This decision-making power rests in a national Parliament in which only 11 Northern Ireland MPs take their seats. Indeed, the interests of the devolved regions and nations of the UK are very much in the shadow of a huge Tory majority and a rumbling juggernaut of England-focused parliamentary business.

Of course, Northern Ireland is no stranger to democratic deficit. We are still getting used to having devolved government and a sitting assembly after three years of government by civil service. But this is only more reason why we cannot be content for things to tick along for another four years, after which we will see the operation of the ‘democratic consent mechanism’ allowed for in the Protocol. This means NI MLAs will have the chance to vote on the technical application of EU directives and regulations on the production and movement of goods. In practice, this being Northern Ireland, the temptation to make this ‘closer to Ireland or closer to Britain’ vote a proxy border poll will be surely hard for many to resist.

My Queen’s colleagues, David Phinnemore, Milena Komarova and I have been concerned about the implications of all this for some time. And so we conducted research on the topic. With thanks to engagement with over 100 representative stakeholders from sectors most directly impacted by the NI Protocol – from farming to pharmaceuticals, transport to telecommunications, haulage to healthcare – we were able to dig deep into what Northern Ireland’s needs might be. We also looked at what happens in other regions which border the EU but which are outside its institutions, from Lichtenstein to San Marino. And we looked at lots of expert research and analysis that has been done by others, from parliamentary committees to think-tanks. We did all this with one question in mind: how to meet the challenges for post-Brexit governance of Northern Ireland.

Governance means government in all its forms – the looser forms (networks, forums) as well as the official ones. And this is a good way of looking at the challenge, because existing institutions will change and new institutions are coming into being for post-Brexit Northern Ireland. And three years of dysfunctional devolution has proven a nascent capacity for social partnership and policy engagement from previously-quiet quarters of society.

Our report concludes with 80 recommendations. These range from the levels of government closest to people (local authorities) all the way through to the highest levels (the UK-EU Joint Committee), with a web of agencies, networks and channels in between. The recommendations are for generally small initiatives and changes, but each one is a small step towards improving the means by which Northern Ireland can be better governed, even as its capacity to determine the policies that most affect it seem to be even further removed from its grasp.

And this is important. After all, the whole peace process stands on the premise that democracy works. Amid all the clatter and the dangers in an era of profound uncertainty and flux, the achievement of the common good rests in the unremarkable, quiet, functions of good governance.