As the presidential race kicks off in America, Dr Christopher Raymond looks at the runners and riders and analyses the results of the recent Iowa caucuses. 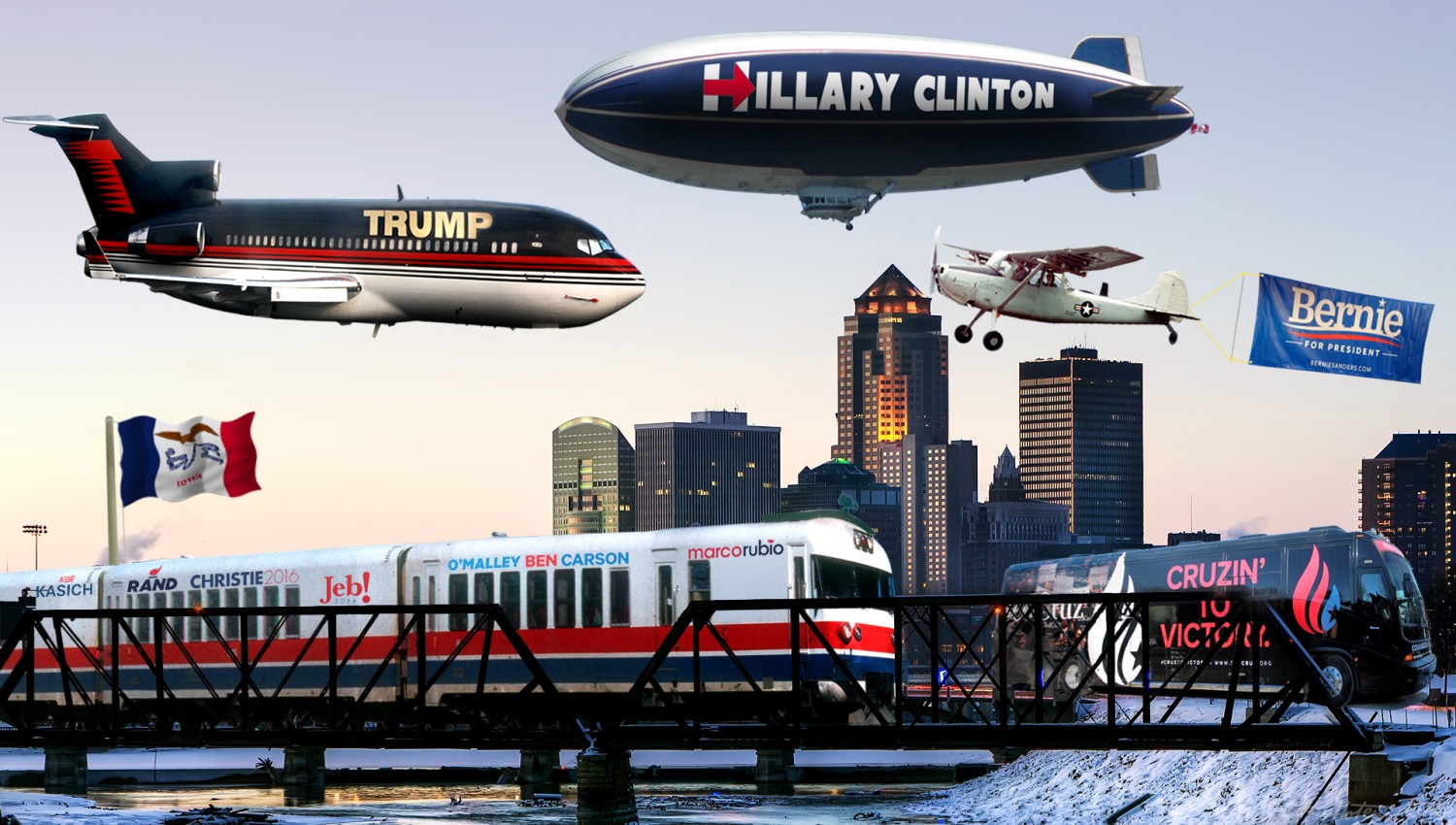 The first-in-the-nation Iowa caucuses were held on 1 February. Harkening back to the 1976 caucuses that helped propel a little-known Jimmy Carter to the presidency, Iowans have shaken up what has already been a strange 2016 nomination race. Though Iowans have a mixed record of picking the nominees (just ask Presidents Gephardt, Harkin, Huckabee, and Santorum about this), Ted Cruz’s surprise victory on the Republican side and Bernie Sanders’ strong showing on the Democratic side have made the race even more interesting – and less predictable.

What is a Caucus?

One of the reasons Iowa is so unpredictable is because it uses caucuses to award delegates. Though the operation of caucuses differs by party (and by state, county, year), caucuses are meetings at set times where registered party supporters discuss and then vote, sometimes after multiple rounds. Particularly on the Democratic side, these meetings allow activists to make their candidate’s case to convince undecided caucus-goers (and sometimes engage in vote trading). In addition to the fact that caucuses have abysmally low turnout (which was true this year, despite record or near-record turnout), the nature of caucuses makes their outcomes difficult to predict. This helps explain why Cruz was able to win despite the polling in the run-up to Monday’s caucuses suggesting a stable Trump lead. Even predicting the results on election day is difficult: the best the media can do to predict the outcomes of caucuses is to conduct entrance polls, which are conducted prior to voters going to caucus; once inside, voters may change their minds.

Despite the problems noted with entrance polls, they do reveal important information about voters’ preferences that may inform our understanding of the race. Contrary to popular opinion in the media, an entrance poll on the Republican side showed Trump’s support was strongest among self-described moderate Republicans. Instead, the poll provided evidence Cruz, not Trump, is consolidating the very conservative wing of the party. 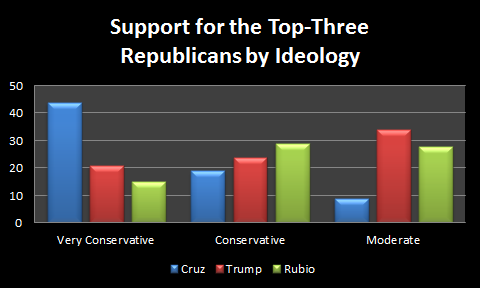 The results also suggest that the considerable efforts by conservatives to winnow the field in order to beat Trump (many of whom do not view as a true conservative) have produced only mixed success. Although Marco Rubio – widely perceived to be the most electable of the top-three candidates – clearly won out among Iowans for whom electability is the most important candidate quality, only 21% of caucus-goers ranked this as the top quality. Though Rubio will most likely benefit from his strong third-place finish, he will need to convince more voters that this strength is the top candidate quality. 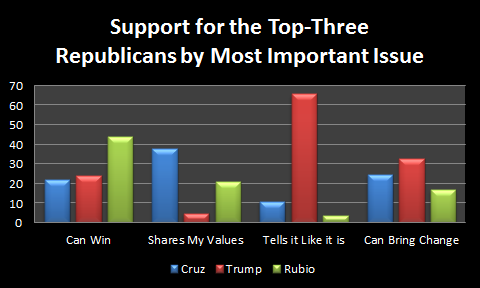 While Cruz was the clear favourite among the 42% of Iowan Republicans who rated shared values as the most important candidate quality, it remains to be seen whether Cruz can consolidate his success in Iowa. Similar to Huckabee and Santorum in 2008 and 2012, respectively, Cruz won in large part due to his support among Evangelicals (for whom shared [religious] values are key to their support), winning 34% of Evangelical voters, who made up 64% of Iowan Republican caucus-goers. However, both Huckabee and Santorum failed to capitalise on their support among Evangelicals in later Evangelical-heavy contests like South Carolina (where, at the time of this writing, Trump still holds a sizeable lead). Moreover, because the base of Evangelicals is smaller in the next contest, the New Hampshire primary, it remains to be seen if Cruz can turn his Iowa victory into lasting momentum.

As one might have predicted, Trump was the clear favourite among those saying that ‘telling it like it is’ is the most important quality (11% of all caucus-goers). More importantly, however, Trump also won out over Rubio and Cruz regarding his ability to bring change (rated the most important quality by 21% of Republican caucus-goers). Though the results from the Iowa caucuses have shattered Trump’s (self-created) aura of invincibility, if Cruz, Rubio, or anyone else is to beat Trump in this anti-establishment climate, they will have to best Trump on the ability to effect change.

Though Hillary Clinton still remains poised to win the Democratic nomination, the fact the little-known Sanders finished strongly will only make the Democratic race more competitive. Sanders’ campaign is premised on doing well in the first two Democratic contests so as to build momentum in future contests; with his strong showing in Iowa, the fact Sanders is poised to win the New Hampshire primary means his campaign has (nearly) achieved its initial objectives. Whether the anticipated momentum will be enough to upset Clinton remains to be seen.

Looking forward, the Iowa entrance poll exposed interesting divides among Democrats. As expected, Clinton has clear strengths among voters prizing experience and electability in candidates. As the Clinton campaign feared, however, voters preferring honest candidates who care about them overwhelmingly preferred Sanders. These deficits may hurt her in the long run, especially if a Sanders win in New Hampshire reduces his deficit on the issue of electability. 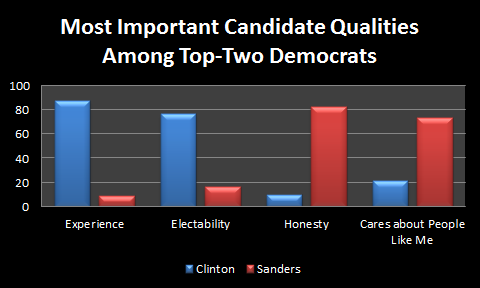 Additionally, while one might have assumed Clinton would benefit from a strong female vote, two different gender gaps were evident among Iowan Democrats. Clinton clearly out-performed Sanders among married women, but Sanders out-performed Clinton among unmarried women. Paired with Sanders’ strong showings among those under 45 and on the left of the party, this deficit suggests Sanders may be able to turn his strong showing in Iowa into a lasting challenge. 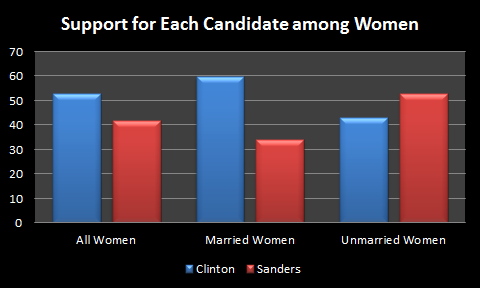 Though they should not be viewed as determinative of elections to come, the results from the Iowa caucuses have complicated the nomination race. Cruz’s victory and Rubio’s strong third-place finish prove Trump is not un-beatable, but their successes only make the race a more complicated three-way race rather than a one-man show. Likewise, Sanders’ performance, combined with his expected victory in New Hampshire, means he will be poised to make the Democratic nomination race much more competitive. Stay tuned!