Grandparents’ experiences of kinship care – repair and rescue, rather than pleasure and leisure

Dr Gemma Carney and Dr Paula Devine look at the concept of kinship care - where children are cared for by relatives and how more and more grandparents are taking on the role of replacement parent with all the accompanying responsibilities. 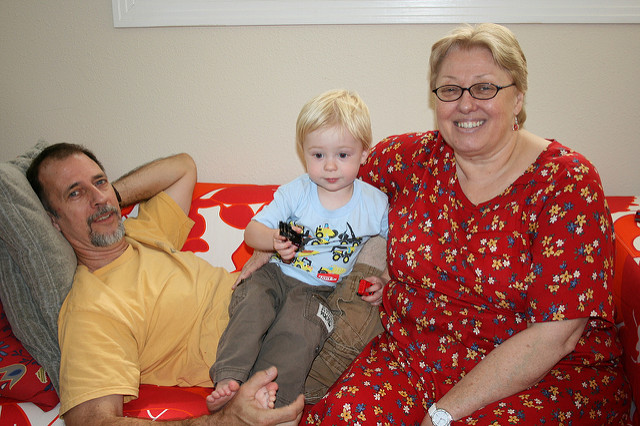 So often grandparenting is presented as a fun and fickle leisure activity of wealthy Baby Boomers. For many grandparents, the idyll of days out, holidays and baby-sitting is a remote possibility. Research by Grandparents Plus has found that in England alone there are 153,000 children living with relatives, and over half of these carers are grandparents – known as ‘kinship carers’. These grandparents play the role of replacement parent with all of the accompanying responsibility: costs, labour and laundry.

BSG NI and Paula Devine’s ARK Ageing programme teamed up with former member of BSG NI Robert Hagan (now based at Keele University) to explore this issue. The seminar Exploring Ineqaulities in caring: grandparents’ experiences of kinship care from multiple perspectives  provided a 360 degree perspective on this complex set of issues. Two panels, one academic, and another based on practice, made for a rich and holistic learning experience.

Speakers included academic social worker Mandi MacDonald who has undertaken research for Fostering Network NI. A sociological frame was provided by Anna Tarrant lecturer at the University of Lincoln. Anna’s presentation focused on the sexism that is experienced by grandfathers who have had to fight to be recognised as capable carers. Anna’s research shows how care is a deeply gendered activity in both policy and practice contexts. This gender imbalance was corroborated by Mandi’s work in Northern Ireland where almost 90% of the self-identifying kinship carers are grandmothers.

In introducing Mandi MacDonald’s presentation, CEO of Fostering Network NI Kathleen Toner, explained how kinship carers are often called on as a result of a family crisis. Their child is either dead or in trouble and cannot care for his/her offspring. So grandparents end up taking on their children’s children at a time of grief or crisis. Many have little money and have no time to give the decision to take on a whole family any forethought. However, the impact of their generosity is profound for the lives of those who are fostered. Kathleen quoted Andrea (aged 17), one of a sibling group fostered by grandparents who participated in the Not So Broken study:

“Without my Granny and Granda, we’d probably have been split up, maybe moved around, and wouldn’t have been able to see each other. That’s just too awful to think about.”

For the second panel, Kinship Care NI advocacy worker Michelle O’Neill gave an insightful and detailed perspective on kinship care from those at the coal face. A big challenge is that many kinship carers have to change their own role in the family. To move from being Granny to Mother (and disciplinarian) is never easy. Many kinship carers will be grieving for a lost child, through death or drugs, while simultaneously having to navigate social services, care orders and, in some cases, court. Kinship Care NI provides financial assistance, including food bank vouchers. The fact that food banks are now an integral part of our system of support is a damning indictment of government policy. One thing I learned today – financial strain is the norm for kinship carers. Grandparents providing care with meagre incomes – is this what the Tories had in mind when they envisaged ‘The Big Society’?

The meaning of these failed policies came to life when the second speaker, one of those selfless Grannnies, spoke about her long and stressful journey to becoming a kinship carer for her son’s two daughters. One of the little girls is too scared to sleep alone, so this grandmother has given up her bed. Granny’s study is now a playroom as she gave up her new job – hard earned after retraining when her children left home – to be a full-time carer. All of this sacrifice is a privilege she says, summing up the experience of being an older kinship carer:

“I want to live long enough to see her reach her goal.”