Professor David Phinnemore argues that at the heart of the commitment of all parties involved in the exit negotiations is the desire to ensure that Brexit does not in any way undermine the Northern Ireland peace process. 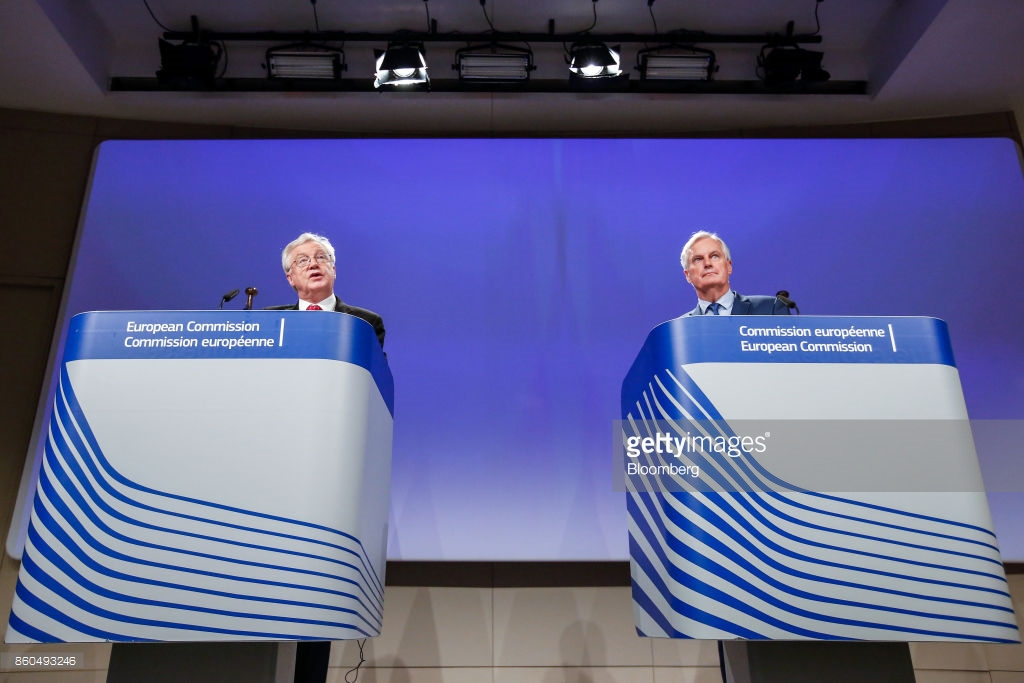 The EU27 determined at the October European Council that ‘sufficient progress’ had not been made in the ‘Brexit’ negotiations to allow the move to the second phase and discussion of the future UK-EU relationship. Nevertheless, they did acknowledge that ‘some progress’ had been made on the Irish dimension to the negotiations, at least as far as convergence on the principles and objectives regarding the protection of the Good Friday Agreement and maintenance of the Common Travel Area were concerned.

Nevertheless ‘further refinement’ of the principles was needed, particularly to take into account ‘the major challenge that the UK’s withdrawal represents’ for the island of Ireland, notably – but not exclusively – as regards ‘avoidance of a hard border’. The UK government was, therefore, called on ‘to present and commit to flexible and imaginative solutions called for by the unique situation of Ireland’.

The need for ‘flexible and imaginative solutions’ to address the challenges that Brexit poses for Northern Ireland and Ireland has become a common refrain in recent months as the Irish dimension to the Brexit negotiations has gained prominence. The loudest voices have been on the EU side, whether it be the European Council, the European Parliament (EP) or the Irish government.

However, the UK government also shares the commitment and is becoming forthcoming in expressing it. Most recently, as she left the European Council, Theresa May declared that ‘Northern Ireland’s unique circumstances demand specific solutions’ and that the UK and the EU27 had both ‘committed to delivering a flexible and imaginative approach’ to deal with ‘this vital issue’.

At the heart of the commitment of all parties is the desire to ensure that Brexit does not in any way undermine the Northern Ireland peace process. The most prominent and oft-voiced concern is that UK withdrawal from the EU will lead to the return of a hard border on the island. This is certain to happen with the UK government intent on leaving the customs union and the single market.

The challenges are many. How to avoid or at least minimize the effects of a hard border is a prominent concern. UK officials are also currently mapping and working out how to safeguard 140 areas of cross-border cooperation, most of which relate to the Good Friday Agreement. Reflecting on the task at hand, there is a dedicated ‘Northern Ireland/Ireland dialogue’ taking place as part of the Article 50 negotiations.

The commitment among the EU27 to finding ‘flexible and imaginative’ solutions for Northern Ireland/Ireland is strong. It is also unprecedented. It appears in the European Council guidelines and the formal negotiating directives issued to Michel Barnier and his European Commission team of negotiators by the EU27. It also featured in the Commission’s recent draft Guiding Principles for the Dialogue on Ireland and Northern Ireland and has been repeatedly used by Barnier.

The Commission and the European Council have not, however, been forthcoming on what form or forms any ‘flexible and imaginative’ solutions might take. The expectation is that the UK government moves first.

From the perspective of the EU, the range of potential issues needing ‘flexible and imaginative’ solutions is considerable. The Commission’s negotiating mandate refers to ‘unique circumstances’ on the island of Ireland with reference in particular to the EU’s support for ‘the goal of peace and reconciliation enshrined in the Good Friday Agreement in all its parts’. It adds that ‘continuing to support and protect the achievements, benefits and commitments of the Peace Process will remain of paramount importance’. It then singles out the aim of avoiding a hard border and that this should be a particular focus of ‘flexible and imaginative’ solutions.

It follows that ‘flexible and imaginative’ solutions are needed and may be developed to address any consequence of Brexit that could potentially affect either the border or the Good Friday Agreement specifically, or the peace process more generally. May – who stated following the October European Council that ‘Northern Ireland’s unique circumstances demand specific solutions’ – appears to concur. Moreover, with the UK government in its Position Paper on Northern Ireland and Ireland linking political stability in Northern Ireland with economic prosperity, ‘flexible and imaginative’ solutions could justifiably be sought to address any aspect of Brexit that affects Northern Ireland’s economic well-being.

The unanswered question is what form or forms might these ‘flexible and imaginative solutions’ take and what issues might they cover? With the UK government committed to leaving the EU customs union and the single market and with very few indications of what form exactly the desired ‘new, deep and special partnership’ with the EU will take, the coverage could be extensive.

A number of ideas have already been floated. Some, such as retaining EU membership for Northern Ireland (and Scotland) – the reverse Greenland and the Dalriada options – or granting Northern Ireland a ‘Special Status within the EU’ – an option advocated by the SDLP and Sinn Fein – are among the most radical ideas. A recent report for the GUE/NGL group in the EP included options that draw on the experiences of Cyprus and pre-unification Germany.

Others accept that Northern Ireland will, as part of the United Kingdom, be leaving the EU, but focus on maintaining as much of the status quo as possible, at least as regards the free movement of goods, capital, services and people on the island. One option is to keep Northern Ireland in the European Economic Area. This would ensure a high degree of regulatory continuity and certainty. It would be no panacea and would need to be accompanied by an extensive range of other solutions to safeguard different forms of existing cooperation. An ‘EEA-plus’ arrangement would be needed.

The EEA option would not address the customs dimension of a hard border, however. Identifying realistic ways in which customs controls on the island can be avoided or minimized is proving exceptionally difficult. Proposals with a narrow focus on technological solutions overlook the complexity of customs controls and generally ignore the important political sensitivities around the Irish border. They are understandably given short shrift.

It is generally accepted that only by the UK remaining in a customs union with the EU can a land border be avoided. If the UK decides to eschew such an option, could Northern Ireland remain in the EU customs union? This would be unprecedented and would almost certainly involve customs controls between Northern Ireland and Great Britain, a prospect politically unacceptable to many unionists. Such controls would also disrupt important east-west trade links; almost 60% of Northern Ireland’s trade is with the rest of the UK.

Another option recently put forward by the leader of Fianna Fáil, Micheál Martin, is the establishment of a Special Economic Zone covering Northern Ireland and the border counties in Ireland. This would involve ‘access’ to the EU customs union and the Single Market ‘distinct from the rest of the UK’.

Importantly, none of these options would necessarily cover agriculture. Indeed, to date, no non-member state has ever secured free trade in agricultural goods with the EU. It is far from certain that the UK post-Brexit will be able to retain full access to the EU’s notoriously protectionist market for agricultural goods. This could prove devastating for several agricultural sectors in Northern Ireland particularly given cross-border supply chains.

To address this, might an ‘imaginative’ solution be to grant Northern Ireland producers, at least in certain sectors (e.g. livestock), tariff- and quota-free access to the EU market provided Northern Ireland takes on and abides by EU rules on animal and plant health?

Beyond trade, are there opportunities for Northern Ireland to retain access to EU funding and programmes? The UK government has proposed exploring with the EU27 ‘a potential future’ for PEACE funding beyond 2020. It could go further and seek the continued involvement of Northern Ireland in INTERREG funding, fore example.

In addition, could Northern Ireland retain eligibility for funding under the EU Structural Funds for cross-border or regional infrastructure projects, provided the UK contributed to those funds? And could Ireland access loans from the European Investment Bank to support projects across the island of Ireland?

As for other areas of existing EU activity, if the UK does not secure involvement in future research framework programmes, could Northern Ireland’s universities be badged as ‘Irish’ for the purposes of eligibility to participate? Could a similar arrangement allow educational institutions in Northern Ireland to continue their involvement in Erasmus+ thus continuing student and staff exchanges and collaborative teaching projects? Again a financial contribution to the programmes would be required.

A further potential area for ‘flexible and imaginative solutions’ is police and judicial cooperation. If the UK withdraws from the European Arrest Warrant (EAW) and from EU databases, could arrangements be put in place for the EAW to be used on the island of Ireland? Could the Police Service of Northern Ireland be provided with access to the EU databases to facilitate the maintenance of cross-border cooperation?

Brexit poses many challenges for Northern Ireland and Ireland, the parts of the UK and the EU, respectively, which will be most adversely affected by Brexit, particularly if the UK moves out of a customs union arrangement with the EU. The effects on economic prosperity, all-island markets, cross-border cooperation and the peace process will be significant if not addressed.

This is being increasingly acknowledged by all parties to the withdrawal negotiations. The EP has been most forthright, arguing that Northern Ireland should remain ‘in some form in the internal market and customs union’. Others remain quiet, for the moment at least, on what form or forms the flexible and imaginative solutions should take.

The need to for imagination is undoubted. Fortunately, the commitment to ‘flexible and imaginative solutions’, particularly on the EU side, provides a welcome opportunity to minimize the anticipated negative effects of Brexit on the island of Ireland. The scope exists to minimize the disruption to the economic well-being of Northern Ireland, to the border, to the Good Friday Agreement and to the peace process. However, ideas and a shared political will to pursue and implement them are urgently needed.