2017 marks the 500th Anniversary of the European Reformation initiated when Luther nailed his 95 theses to the door of the Castle Church in Wittenberg. To mark this event, the Institute of Theology in collaboration with Union Theological College, are hosting a conference looking at various aspects of Luther's life in Theology. 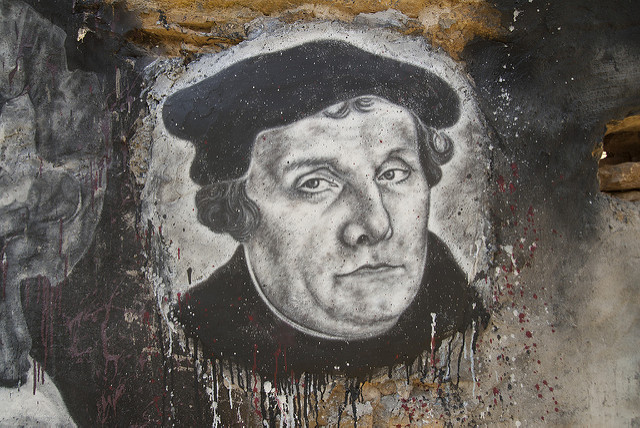 To mark the 500th anniversary of the Reformation, the QUB Institute of Theology has organised a two-day Conference on Martin Luther in the Elmwood Hall, University Road. Ten lectures on Thursday 2nd and Friday 3rd February will examine a range of aspects of his life and teaching. Conference co-ordinator Professor Laurence Kirkpatrick reflects below upon some facets of the Luther story.

The sixteenth-century Augustinian monk Martin Luther is intrinsically linked with the events we call the European Reformation, a period of unprecedented upheaval in church and society, initiating the most dramatic reform movement in the history of Christianity. According to tradition, on 31 October 1517 Luther nailed his Ninety-Five Theses to the door of the castle church in Wittenberg and thereby ‘hatched the egg’ that humanist scholar Desiderius Erasmus had laid. Of course the truth is more complicated than tradition: Luther himself never referred to this incident and it was first recounted many years later by his colleague Philip Melanchthon who did not arrive in Wittenberg until 1518.

For Luther, the Reformation questions were birthed within his own intense personal struggle to obtain peace with God. Indeed, Luther’s character is crucial to understanding much of his experience: warm in his friendships, he was equally ruthless in rejecting those he perceived as disloyal. His fortuitous posting in 1513 as a Theology lecturer in the new Wittenberg University allowed him time to study and reflect on Bible content and Church practice and here he developed a new understanding of grace.

His ninety-five theses in 1517 were part of his developing theological understanding. His teaching method was to move away from traditional Philosophy and attempt to explain the bible text in its original context and then apply the text to the contemporary situation. This novel lecture style became known as the ‘new learning’ and gained a meteoric reputation for Martin Luther. The revolutionary idea of free grace and pardon through Christ and consequential criticism of the predominant ecclesiastical indulgence certificate system caused the sparks which set Europe alight.

Remarkably, Martin Luther survived several potentially fatal trials and lived a full life before dying of natural causes at the age of 62. Successive examinations by his own Augustinian Order, Cardinal Cajetan (the papal legate to Germany), the Leipzig Disputation against the celebrity Catholic theologian Johann Eck, a papal bull of excommunication from the Pope Leo X and scrutiny before Emperor Charles V at the Diet of Worms all failed to silence him. Undoubtedly he was protected by the powerful Friedrich III, Elector of Saxony, and founder and benefactor of Wittenberg University in which Luther was now the star attraction.

The break with Rome was not instantaneous. Luther’s personal journey started from a position where he initially believed the Pope would rectify Church error and abuses if he was aware of the real situation to a position where he believed the Pope was too much a part of the problem to ever be part of a solution. The eventual breech, as we are all too aware in Belfast, has become permanent.

To some extent the most exciting aspect of the Luther story was the 1517-21 period and everything thereafter was something of a frustrating anti-climax. Officially he lived the rest of his life under an Imperial ban but safe within the confines of Electoral Saxony. He was undoubtedly the most famous German in the 16th century and continued to exert extraordinary influence through his copious writings which were promptly printed and circulated in the German language. Luther’s collected works extend to 120 volumes, including eleven volumes of letters and six volumes of table conversations.

One of the fundamental building blocks of Luther’s new learning was that Scripture alone – sola scriptura – should be the source for all that we believe and practice. However, his assumption that the provision of an open Bible would be enough to accomplish reform proved naïve as varying interpretations emerged. Famously, at Marburg Castle in October 1529, Luther and the Swiss reform leader Huldrych Zwingli could not agree a theological interpretation of the fundamental sacrament of Communion. Additionally, several reformers rejected infant baptism as they could not read of a single clear example in the New Testament. The infamous and catastrophic religious crusade of John of Leiden at Munster in 1534-5 illustrated the dangers of unchecked enthusiasm for ‘biblical living’.

The ‘Peasant Revolt’ in 1524-25 created serious problems for Luther. Many of the German peasants incorporated Luther’s teaching into their demands for better conditions and looked to Luther for support for their cause. After an embarrassing hesitation, however, Luther sided with the aristocrats and supported their suppression of the revolt. Around 200,000 peasants were killed and Martin Luther’s popularity waned significantly as a result of his stance in this crisis.

Luther was undoubtedly frustrated at the lack of success and unity in his reform movement. Perhaps his most controversial publication was On the Jews and their Lies (1546) in which he advocated harsh repressive measures which were cited by the Nazi regime in support of 20th century persecution. Various Lutheran Churches have since issued apologies for Luther’s harsh anti-Jewish publications.

The new Reformation ideas were not immediately and smoothly adopted within German territories. At an Imperial Diet in Speyer in 1529, a decision was taken to freeze the reform process; already introduced changes could be retained but no further innovation would be permitted. Fourteen imperial cities and five territories recorded a protestatio and the nickname ‘Protestant’ entered common vocabulary.

Luther died of heart failure on 18 February 1546 while on a visit to Eisleben, the town of his birth.

The Luther 500 Conference will examine relevant aspects of Luther’s life and teaching. Speakers include Professor Mark Noll of Notre Dame University who is visiting fellow in the QUB Institute of Theology and also Professor Mark Elliott of St Andrew’s University.

Full details of the Conference are available here. No prior registration is necessary and all sessions are free of charge.

Rev Laurence Kirkpatrick is Professor of Church History at the Union Theological College in Belfast. His research covers several areas of Church History, ranging from the Patristic Era to the present century.