Managing a harder border: The bare essentials for an independent Scotland

In a new report launched last week, Professors Katy Hayward and Nicola McEwen consider the prospect of an independent Scotland within the EU and what that might mean for Scotland's borders. in this blog, Katy gives an insight into the report, examining what border management might look like for Scotland in that scenario. 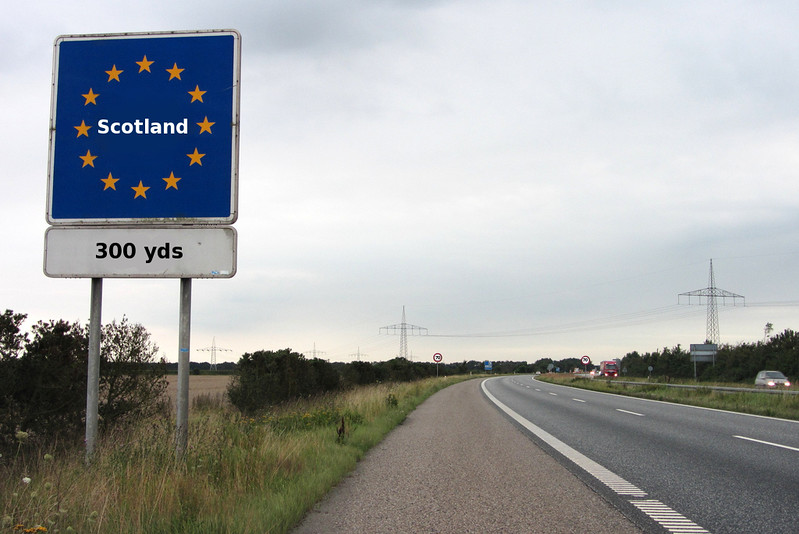 If there is one thing that the events in Northern Ireland of the past week tells us, it is that confusion about the purpose, nature and responsibility for border checks and controls can lead to all sorts of trouble down the line.

Last week Professor Nicola McEwen and I published a report, ‘An EU border across Britain: Scotland’s borders after independence’, as a small contribution towards avoiding such trouble in such an eventuality as an independent Scotland rejoining the EU, which we know is the plan for the parties of the Scottish Government.

A big part of being an independent sovereign state – as any Brexit-supporter will know – is managing the borders of the state. In the scenario we consider here, Scotland’s borders would become the external borders of the EU.

In some ways, this is helpful for prediction because we know from both being formerly in the EU and now outside it what this means for border management. Back in the EU, Scotland’s borders with the other member-states will become ‘softer’. If the Protocol is in place, then its border with Northern Ireland will become softer than it is now too. This will bring benefits. At the same time, its border with England and Wales could become considerably harder. What does this mean?

When we imagine a hard border people tend to immediately envisage walls and fences. But the opposite of a hard border is not an invisible one but an open one. Put simply, moving something across a hard border requires overcoming more hurdles than across a softer one.

These hurdles most obviously take the form of border controls. These include:

The kind of checks NI Agriculture Minister Poots ordered to be stopped are in relation to some of the most stringent form of regulatory controls, namely sanitary-phytosanitary on agrifood products.

In the case of an independent Scotland in the EU, we do not envisage passport controls at the Scottish-English border, as we expect that an independent Scotland would remain within the Common Travel Area. Trade across the border, however, would be subject to the terms of Trade and Cooperation Agreement negotiated between the EU and the UK. This would mean controls of the type we currently see on EU trade with Britain. However, trade for Scotland with the EU would become easier, as would trade with Northern Ireland (if the Protocol is in place then).

But border controls are not just about trade and immigration. As we have seen post-Brexit, hurdles to border movement will be felt across a vast range of movements. For example, ATA Carnets needed for ‘temporary export’ of sound equipment accompanying a band for a gig; the near impossibility of having a prize bull sent over to attend a show; the ban on the entry of seed potatoes; the vaccinations and certificates needed to accompany the family dog.

You can imagine how a hard border hits border communities first. And how this can get complicated very quickly…

This is why we focus on the three fundamental principles of border management:

These three things are interlinked. The more regulatory divergence between the two jurisdictions, the less sure you can be that a good meets the criteria for entry. The more data you have on what is crossing, the less you need to have ‘at the border’ controls.

And so we move from principles to practice. What is needed in practice can be summarised as four things.

First, information needs to be submitted to authorities and processed, analysed and responded to.

Secondly, this requires resources. Just see for example the complaints of businesses about the time and training needed to complete customs paperwork.

Last but not least, good border management entails communication. Between officials in the multiple agencies involved. Between the authorities on either side of the border. Between governments and officials. And between government departments and traders, port operators, hauliers and border-crossers. As we have seen in post-Protocol Northern Ireland, a breakdown or conflict on any of these fronts can bring all sorts of problems.

Managing a hard border with minimal disruption entails helping all concerned to prepare for the new hurdles and adapt to navigating them. As such, early recognition and spelling-out of what all of this entails will help ease the effects of a more distant relationship between neighbouring countries, even if it can’t avoid the existence of a hard border altogether.

You can read the report the full report by clicking on An EU border across Britain: Scotland’s borders after independence.

Article originally appeared on the Centre on Constitutional Change website.