Northern Ireland and Brexit: Struggling and divided over ‘what next’

As some politicians voice concern about Brexit, Professor David Phinnemore assesses some of the key challenges posed by Brexit for Northern Ireland and how Northern Ireland political parties have reacted to the result of the EU referendum. 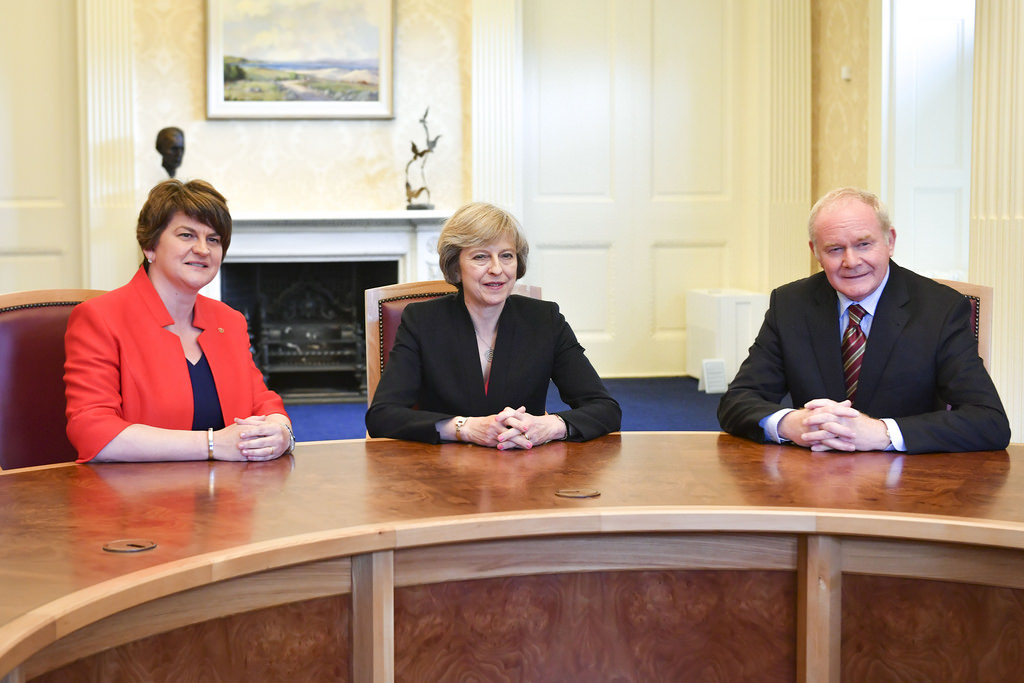 They were clear: they had identified a range of issues of ‘particular concern’ and they were committed to achieving ‘the best possible outcome for the people of Northern Ireland’. Unsurprisingly many of the issues stemmed from Northern Ireland’s ‘unique’ position as the only part of the UK that shares a land border with an EU member state. There should be no impediment to the movement of goods, services and people; arrangements relating to criminal justice and tackling organised crime should not be compromised; no incentive should be created for those who wish to undermine the peace process or the current political settlement in Northern Ireland (NI).

There were other matters on their minds: retaining ‘as far as possible’ access to EU markets and to labour; the position of cross-border workers; energy supply; access to EU funding and programmes; the vulnerability of the agri-food sector to the loss of EU funding, to potential tariff and not-tariff barriers to trade.

According to the August letter, the concerns voiced represented ‘initial thoughts’. The widespread assumption – and indeed expectation – was that a further and more detailed expose of concerns would follow. Almost three months on, there is little sign of a follow-up.

The NI Executive faces significant constraints in developing its position. Like the UK government, it was appallingly ill-prepared for a ‘leave’ vote in the referendum.  No serious consideration had been given to the possible implications for Northern Ireland of Brexit. There had been no Executive-led inquiry, only one commissioned study of note – into the economic implications of Brexit for Northern Ireland – and no Assembly-led inquiry. Moreover, no effort had been made to map out in any detail the issues that would need to be considered in formulating an NI position in any negotiations on withdrawal or a new UK-EU relationship. Put simply, there were no contingency plans for a leave vote.

The NI Executive also remains openly divided on the question of ‘what next’. The basic positions of the two parties that make up the NI Executive – the Democratic Unionist Party (DUP) and Sinn Féin – seem irreconcilable. Foster and the DUP are committed to the UK-wide result and seeing through a UK withdrawal from the EU led by the UK government. McGuinness and Sinn Féin accept only the 56% ‘remain’ vote in Northern Ireland and vehemently oppose Brexit.

The two parties also differ over process. Sinn Féin – along with the pro-remain Social Democratic and Labour Party (SDLP) and the Alliance Party – advocate extensive consultation and representation, including through the Irish government’s ‘All-Island Civic Dialogue’ initiative.

The DUP has so far been far more circumspect. Along with the Ulster Unionist Party, it refused to participate in the launch event of the All-Island Civic Dialogue in early November. Foster dismissed it as a ‘grandstanding event’ for ‘remoaners’.

The  preference of the DUP is to place faith in the UK government to represent Northern Ireland’s interests and for existing formal inter-governmental processes. Encouragingly, this has recently included endorsement of the North-South Ministerial Council as an appropriate venue to discuss issues raised by Brexit.

However, there are two major concerns around the question of ‘what next’ for Northern Ireland in terms of Brexit. First, there are very few indications as yet that the NI Executive has the capacity to produce a meaningful and substantive set of priorities. Interested parties generally struggle to identify processes and mechanisms for effective consultation and coordination; and no effort has been made to follow the Scottish Government’s lead and, for example, appoint a ‘Brexit’ Minister or convene a ‘Standing Council on Europe’ of specialist advisors.

And business organisations, chambers of commerce, farmers and their representatives, third sector organisations, the universities, individual businesses, opposition political parties have all been expressing views on the issues they believe need to be addressed in any Brexit negotiations. Although there is a recognized need to seize any opportunities arising out of Brexit, there are very few voices expressing anything but concern if not worry about the economic implications of Brexit.

Whether this listening will translate into the incorporation of Northern Ireland’s interests into the UK government’s position, the prioritisation of those interests in negotiations with the EU(27), and the securing of those interests in the negotiating outcome remains to be seen.  It took the Prime Minister two months to respond to the letter from Foster and McGuinness. The response from 14 October provided little more than a bland and perfunctory acknowledgement of the issues they had raised.

Moreover, there appears to be no real wish on the part of Prime Minister to develop more effective and formal consultative mechanisms to deliver the ‘UK approach’ she promised on taking office. The focus is on the existing Joint Ministerial Committee. It held its first plenary level meeting on 24 October. The meeting – the first since the referendum involving first ministers and the PM, indeed the first such meeting since December 2014 – did announce a new Joint Ministerial Committee on EU Negotiations. However, it provided the devolved administrations with few insights into UK government thinking on its Brexit strategy. Brexit was also only one of three issues on the agenda.

The earlier announcement that the three Secretaries of State for Northern Ireland, Scotland and Wales would only attend ‘as required’ the Cabinet’s Brexit sub-committee chaired by Theresa May had provided scant comfort that the devolved administrations’ voices would be heard and their interests defenced. The indignant response to the announcement – at least from the Scottish Government – was wholly justified.

This is particularly so given the UK government’s apparent swing to a ‘hard’ Brexit during the autumn conference season. Viewed from Northern Ireland, such a move demonstrates a clear failure to appreciate its implications for the border.

Some might be reassured by the UK government’s avowed determination to avoid a return to ‘the borders of the past’, and there is certainly a determination among most interested parties in Northern Ireland to maintain the current ‘soft’ border regime. But it is difficult to square such intentions with the implications of a ‘hard’ Brexit – with the restrictions on free movement that will likely entail.

These challenges are generating discussions around finding some form of ‘bespoke arrangement’ or ‘special status’ for Northern Ireland. There is support for such an approach from the SDLP, Sinn Fein and the Irish Government; there are also some tentatively supportive voices in the DUP, including it appears Foster. However, in October, unionists in the NI Assembly voted down, albeit narrowly, a motion backing a ‘special status’.

The vote is unlikely to deter advocates of a bespoke arrangement. Yet to establish what that might entail and achieving such an outcome is a major challenge. The issues facing Northern Ireland need to be fully understood, options and priorities identified, and solutions proposed. This requires levels of consultation, coherence and leadership not yet in evidence on the part of the NI Executive. It also requires a genuine willingness on the part of the UK government to understand, engage with and address the concerns that the prospect of Brexit raises for Northern Ireland.

Article first appeared in the UK in a Changing Europe.