No break-up, but break out: upheaval in Northern Irish borderlands

Some aspects of this blog were presented as a talk at the Social Scientists Against Hostile Environment (SSAHE) 17 May Webinar: Brexit, hostile environment, and the breakup of the United Kingdom. 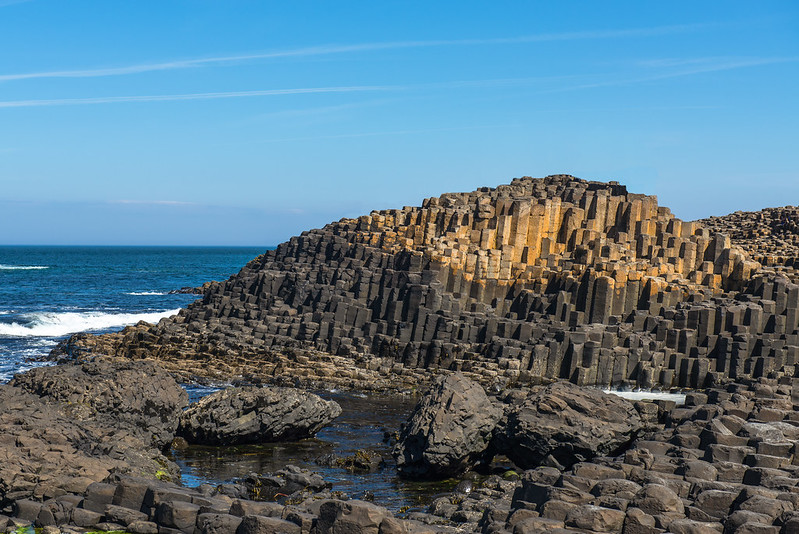 ‘Who is Edwin Poots?’ A question the British newspapers asked for very good reason: most people outside Northern Ireland (not even speaking of places beyond the UK or Ireland), might not have a clue who Mr Edwin Poots is; some might roughly associate him with one of the leading Unionist/Protestant parties, e. g. the Democratic Unionist Party (DUP). But hang on, Arlene Foster (DUP) acted as First Minister for a few years, and what happened to her, and to the political scenery in the Northern Irish Borderland – to Britain and to the EU/Ireland – also recently?

Northern Ireland frequently hits the international and British news encompassing debates on Brexit and now ‘The Protocol’. We were just winking at the chaotic outcome of the long-lasting negotiations between Britain and the EU regarding the sea border, and – jump – another upheaval each week and counting.

The recent violent youth riots in Northern Ireland started at the end of March 2021 and lasted until 9 April, only halted in respect for Prince Phillip’s death and the royal family’s right to mourn peacefully. Only in the later days of the riots the protests had spilled over to local areas where ‘peace walls’ keep the different communities physically apart, echoing further rifts and tension with respect to a sectarian divided society. However, the riots illustrate a more complex notion of what the BBC and Westminster usually like to call, ‘The four nations’.  Irish nationalists/Republicans might seek a Union with the Republic of Ireland whereas Unionists/Loyalists wish to remain part of the British nation family, on the other.

It is safe to say that there is no cohesive understanding of one nation in Northern Ireland.  (Also see Vieten & Murphy, 2019) This is different, for example, from nested national identities of smaller nations such as the Scottish. This difference in feelings of political belonging and outlook positions any idea to have a referendum on Irish unification more complex, adversary and challenging. A survey organised by the BBC NI Spotlight programme showed that 51% of people in NI, and 54% in the Republic – on both sides of the border – accept that there might be an Irish Unification in about 25 years. In Northern Ireland, asked if there would be a border poll today, 49% responded saying they might vote to remain in the UK, 43% backing a United Ireland, and 8% undecided.

Things are not only up in the air, but there is something in the air. The density of different forms of upheaval might prepare for an outbreak beyond the territorial break-up.

But coming back to the youth riots, it seems working class loyalists feel not only disenfranchised from the peace process since 1998 but tried to resist the legal effects of the Ireland/Northern Ireland protocol since January 2021. Johnson’s agreement with the EU created a customs border in the Irish sea offending some sections of the Unionist communities. The televised spectacle of violent outburst in working class loyalist neighbourhoods demonstrated an attempt of ‘break out’ from pandemic boredom, but also uttering extreme frustration with Westminster negligence and upset about the Protocol.

Of course, it is a paradox that Loyalists want to keep the Union with Britain despite being provincialized –  a small borderland to Britain – and lied to when Boris Johnson and the political elite in charge repeatedly denied that they will be an Irish Sea border. This paradox, however, applies stunningly to Sinn Fèin, the republican party, and representing the Catholic community in this framework of binary politics, who agreed to a deal that Westminster should legislate for the Irish Language Act, trying to keep the coalition with the DUP up and running.

This is a very remarkable move of political pragmatism turning to the colonial (‘ex-colonial’) master to side-line the stalemate inherent to consociational power sharing with a DUP party, the latter drifting even further towards reactionary positions against queer, women and – it seems – those who fought for and opt for cultural-lingual self-determinacy.

But let’s keep in mind this is not the first case of Westminster’s intervention in recent years: the London parliament intervened politically while expanding the British – and more liberal legislation on abortion rights and same-sex marriage – to Northern Ireland, in July 2019. Until January 2020 there was no functioning devolved government in place. This is different to the current situation, we could argue.

Either way, from a traditional republican perspective, the British legislator and its parliament is not regarded as legitimate, and – writing in June 2021 – the republican party Sinn Féin does not take up the Westminster parliament seats in London that they have been elected to as political representatives. For outsiders this is difficult to comprehend, but it illustrates the complexity of politics in the GB/Northern Ireland and Irish context. (Vieten, 2021 forthcoming1).

To understand some of the complexities and underlying contradictions below the community division surface in Northern Ireland, it is necessary to spell out the everyday presence of sectarianism and the visionary incapacity of consociationalism to provide a ‘shared’ future for people living in this province.  In Northern Ireland, but also in other societies recovering from violent conflict, such as Lebanon, Macedonia, and Bosnia-Herzegovina for example, consociational power-sharing has been established to help to develop post-conflict governmental structures. With the ‘Good Friday Agreement’ in 1998, this model of governance was enshrined legally, and demanding the coalition of political parties that represent the divided ethno-religious (or ethno-national) groups. The political rule of consociationalism in Northern Ireland means that political representation of the demos is bounded to the two dominant ethno-religious communities who must be equally represented in the local and devolved government; this clearly is very different to most contemporary representative liberal democracies.

It does have dramatic consequences for any alternative voting in terms of political representation though: voting for the Alliance Party, the SDLP, or the Green party means they never will be enabled to enter a coalition on their own as coalition building is depending on the ethno-national representation of the two ‘faith’ communities, e. g. DUP/ UUP and Sinn Fèin. In perspective this creates an absurd situation as it perpetuates the ideology of the two-community mandate essentialising group belonging, and neglecting the fact that individuals ascribed to the two communities might identify beyond these strict group boundaries. Susan McKay  for example, illustrates in a down to earth approach the diversity of Protestants in Northern Ireland and in what way attitudes, and notions of belonging are changing.

The legacy of colonialism and violence is inscribed into the sectarian conflict of the two ethno-religious groups continuing today and moving beyond it would need efforts to de-colonialize and tackle the culture of sectarianism, seriously (Vieten, 2021 forthcoming2). Further, it might need a vision of moving beyond the paradigm of consociationalism developing a perspective of ‘breaking out’ while going beyond.