The quality of mercy: how religion and ethno-nationalism influence attitudes towards amnesty in Northern Ireland

The Good Friday Agreement gave political resonance to concepts like amnesty, forgiveness and mercy - all of them familiar from the lexicon of religion. John D Brewer and Bernadette C Hayes from Aberdeen University found that religious and ethno-national identity in Northern Ireland both influence public attitudes towards amnesty. In particular, belief in the Bible as the literal word of God is a significant predictor of people’s support for retribution. 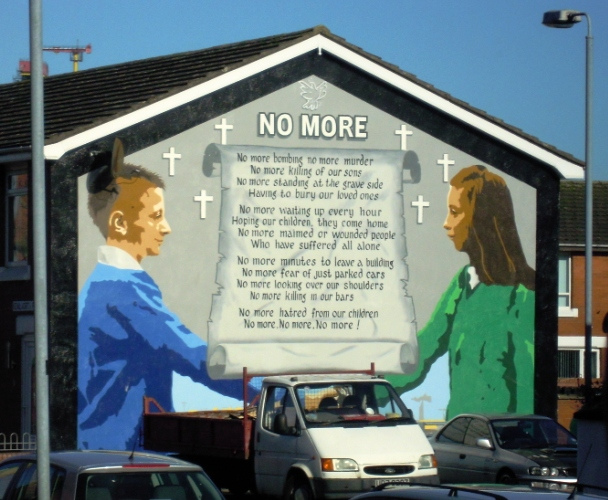 Much of the language of transitional justice studies is quasi-religious, using terms like mercy, amnesty, forgiveness, justice, atonement and apology. This is in part because the field is interdisciplinary and many theologians have contributed toward its theorisation. But it is also the case that transitional justice deals with timeless ideas that are redolent in the three Abrahamic faiths, giving them a doctrinal dimension.

This is what animates the growing literature on religious contributions to transitional justice, and explains why faith-based organisations and practitioners are heavily involved in conflict transformation and humanitarian interventions.

Religion also features in this discourse because it often acts as a surrogate for ethno-national conflict. Traditionally, studies of ethno-nationalist conflict have paid scant attention to religion, pointing to a range of other influences, such as economic deprivation or the political organisations of minority groups and their desire for self-determination. Research over the last few decades, however, stresses the emergence of religion as a global political force, seeing it as a primary source of conflict based on ethno-nationalist disputes.

In fact, some scholars argue that religiously motivated violence has now become an ubiquitous element of modern conflicts and the most common justification for terrorism in the world today. More recent research, however, calls into question the singularity of both these approaches – pointing instead to the intersection, or combined effect, of both religion and national identity as a key factor in accounting for intrastate conflicts based on ethnic differences.

While a growing body of research has focused on the relationship between religion and ethnic conflict, the relationship between religion, ethnicity, and transitional-justice mechanisms has remained largely unexplored. This is particularly the case when we consider the influence of ethno-nationalism and religious conviction on attitudes towards amnesty. It is with this omission in mind that we examined the net influence of religion and ethno-nationalism on attitudes towards amnesty in Northern Ireland.

A key focus of our investigation was to assess empirically the degree to which both ethnicity and religion may be considered a key determinant of views. The use of Northern Ireland as a case study may be considered particularly appropriate for the following three reasons. First, the Northern Ireland peace accord is now considered an exemplar of conflict resolution throughout the world. Second, amongst the various measures introduced to deal with the legacy of Northern Ireland’s violent past, amnesty proved to be one of the most unpalatable elements in the Agreement. Finally, Northern Ireland is a place where religion and ethno-national identity elide, enabling us to examine the net effect of both religion and ethno-national identity on public attitudes towards amnesty.

The data used to investigate this issue was from the 2011 Northern Ireland Social and Political Attitudes Survey, funded by the Leverhulme Trust as part of the Compromise after Conflict research programme undertaken at Queen’s University and Aberdeen University between 2009-2015. Conducted between April and August 2011, the survey is based on a multistage random sample and is representative of the adult population. Using a questionnaire design, it is based on personal interviews involving 1,500 respondents aged 18 years or older, with a response rate of 59 per cent.

Religion was operationalised in terms of a range of religious measures, including a variety of religious practices such as church membership, attendance and prayer, and indicators of one’s belief in and about God. Ethno-nationalism was operationalised in terms of congruency – Protestants who perceive themselves as both British and Unionist and Catholics who are willing to see themselves as both Irish and Nationalist – in ethno-national self-identification.

The results of our investigation lend support to the dualistic view that both religion and ethno-nationalism are the key determinants in explaining attitudes towards amnesty. Our arguments in support of this proposition are threefold.

First, religious identification is a key distinguishing predictor of opinions concerning amnesty. Even when a range of background control variables are included in the analysis, Protestants are significantly more oppositional in their views than Catholics.

Secondly, when the impact of both religion and ethno-nationalism within the two communities is considered separately, both religion and ethno-nationalism are significant net predictors of attitudes. Of these various religious measures, however, it is one’s belief in and about God which emerges as the key distinguisher of views. As in previous research on attitudes towards a range of moral attitudes, including the death penalty, while both religious rigidity, or holding a definite belief is God, and a view that the Bible is the literal word of God, are significant positive predictors of expressing a retributive, or oppositional stance, regarding amnesty, perceptions of an engaged God is a significant negative predictor of such views.

Thirdly, a similar pattern emerges when the influence of ethno-nationalism is considered. While ethno-nationalism, or congruency in religious, national and communal identity, is a significant positive determinant of opposition towards amnesty among Protestants, it is has a significant negative effect on such views within the Catholic community.

Finally, it is important to note that the relationship between religion and ethno-nationalism on attitudes towards amnesty also differs between the two religious communities. While perceptions of an engaged God and ethno-nationalism are the most consistent negative determinants of opinion with regard to opposition to amnesty among Catholics, it is a belief in the Bible as the literal word of God and ethno-national identity which emerge as the most uniform positive predictors of such retributive views within the Protestant community.

Overall, our results point to the important role of both religion and ethn-onational identity in determining attitudes toward transitional justice mechanisms in societies emerging from conflict. It is to a further investigation of this issue – the complex and differential impact of both religion and national identity – on attitudes towards a variety of transitional justice mechanisms, such as truth commissions, that future research should be directed.