Dr Muiris MacCarthaigh looks at the fall-out of the banking crisis in Ireland over the past ten years in light of the launch of the research report ‘Apologies, Abuses and the Past: The Irish Banking Crisis. 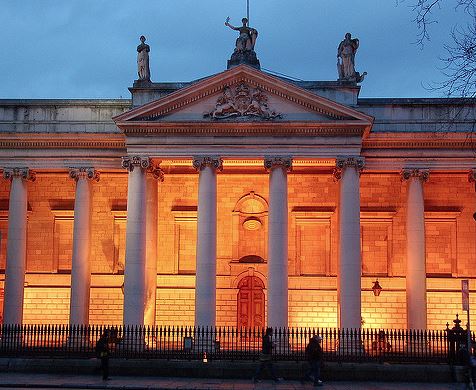 Saturday 29th September marks the 10-year anniversary of one of the most controversial decisions in the history of the Irish state – the government’s late-night guarantee of all liabilities within domestic Irish banks. A fortnight before, totemic US bank Lehman Brothers went bankrupt due to its huge exposure to the American property market. This caused a freeze on inter-bank borrowing markets, and resulted in a global funding crisis to which Irish banks were badly exposed.

Citing fear of a run on bank deposits by customers, such as that which had occurred in Britain earlier in 2008 with Northern Rock, the then Fianna Fáil‐Green Party coalition government decided to provide a guarantee not only to ordinary depositors but, controversially, to all bond‐holders of the six main domestic financial institutions.  The Oireachtas Banking Inquiry which took evidence throughout 2015 heard differing accounts of the decisions that led to the guarantee. This was made more difficult by the fact that no minutes of the meeting or drafts of the wording for the guarantee are to be found.

As the scale of the losses materialized in the guarantee’s aftermath, the Irish government pumped huge sums of money – much of it borrowed on international bond markets – into the banks.  At one stage, then Minister for Finance Brian Lenihan claimed the bailout would constitute the ‘cheapest bailout in the world so far’. In fact the cost to the taxpayers of bank recapitalization quickly escalated to over €55bn.

The banking crisis and subsequent government guarantee have had enormous consequences for Irish politics, economy and society. It resulted in the ‘earthquake’ election of 2011 and the election that nobody won in 2016 which fragmented the Irish party system. It gave way to years of budgetary cutbacks and underinvestment in critical areas such as housing.  And although Irish economic growth has recently recovered to outperform its EU peers, the legacy of national debt from the ‘lost decade’ remains high.  The effects of the crisis have also been felt north of the border where sales of distressed property loans have courted controversy.

So what are the views of the victims of the Irish banking crisis? Technically, all taxpayers in the Republic of Ireland could be considered to be victims as a proportion of their annual tax continues to repay the cost of the bank bailouts. But there are many who have been more directly and severely affected by the crisis – the hidden stories of the crisis.

As part of an Economic and Social Research Council (ESRC) project titled ‘Apologies, Abuses and Dealing with the Past: A Socio-legal Analysis’, researchers from Queen’s University Belfast have been speaking to those who have been asked to apologise for harms associated with the banking crisis, those who were directly affected by those harms and members of the general public across the island. In addition to conducting interviews and focus groups with bankers, victims and other stakeholders, the team conducted a nation-wide population survey during June and July 2017 with a stratified sample of more than 1000 individuals in 100 locations across all 32 counties.

The results identify that survey respondents strongly believe that:

While apologies and statements of regret have in fact been made by some banks, 89% of the Irish public are unaware of them and 94% are not aware of any apologies by individual bankers. Only 4% believe that the Irish state has apologised adequately for its role in the banking crisis.

Interestingly, there are mixed views as to how personally helpful people believe direct apologies by banks to victims of the economic crisis might be, with only 41% of those surveyed believing them to be so. However 73% of respondents agreed that further apologies by those responsible for the banking crisis would be helpful to society as a whole. Only 4% agreed with the idea that “people should just move on”, with youngest respondents (between 18 and 24) the most likely to agree with this statement (with 10% agreeing to this). These views are also reflected in focus groups and interviews with victims of the banking crisis. As one interviewee said:

The fact that [the banks] let a property bubble come up and the economy crashed and everything else, [but] you are at fault if you don’t make your full repayments. So, they are pushing the guilt on you and that is what is affecting you for ten years, trying to pay this mortgage that you can’t afford.  It’s that you are in the wrong if you are not paying it.  So, for the banks to suddenly flip that and apologise and say, well those ten years actually where we were squeezing the life out of you, you weren’t in the wrong, we were.  That would be too big a gap for them because: where is my money?  Why were you squeezing three-quarters of my wages for the last few years, where do I get that back?

One of the most striking issues that has come to light through these interviews and focus groups is the extent of hidden or unseen suffering. Those who have lost homes, experienced family break-ups and lost loved ones to suicide are real victims of the consequences of the banking crisis.

Although a decade has passed, the legacy of that crisis remains keenly felt across Ireland.

The bEhaviour of the Banks cOntinues to enrage people . The tracker mortage scandal where ulster bank in particuLar continues to drag its heels is more evidence of how irreformable some of these organisations have become.