The Border after Brexit

The question of how to avoid a hard Irish border drew a lot attention during the UK-EU withdrawal negotiations, resulting in the Protocol on Ireland/Northern Ireland. 10 months after the end of the transition period, a new study from the central border region shows that Brexit remains a live topic of concern on both sides of the border, and that uncertainty and anxiety still persist. 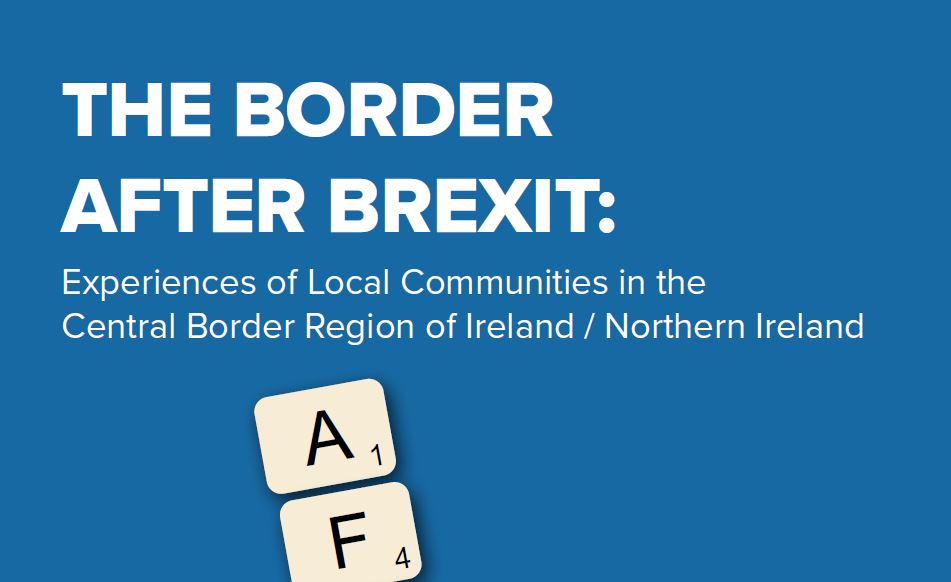 Working in conjunction with the Irish Central Border Area Network (ICBAN) – the cross-border local authority partnership consisting of eight local authorities in the Central Border Region of Ireland/Northern Ireland – researchers in the School of Social Sciences, Education and Social Work have published the results of a study on the impact of Brexit and the Protocol in the region, entitled The Border After Brexit.

The research consisted of three parts – an online survey of just under 400 responses, focus groups and stakeholder interviews with participants across the region, from both sides of the border. The survey is taken from a self-selecting sample, so it is the comments and viewpoints submitted by respondents that form the focus of the report.

This is the fourth such study that QUB has conducted in collaboration with ICBAN. The first report, Bordering on Brexit, was published in November 2017 and found that people in the region felt uninformed about Brexit, unrepresented in the process, and had deep fears about the consequences of it.

The second report, Brexit at the Border, published in June 2018, showed that ease of access to transport, health, education and other services was greatly valued by the majority of people on both sides of the border in this region. It also revealed that Leave and Remain voters in the region share a common priority for the border to remain as ‘seamless’ and ‘frictionless’ as it is today.

The third report, The Border into Brexit was published in December 2019, just before the UK exited the EU. That report found that the revised Withdrawal Agreement negotiated by Prime Minister Boris Johnson appeared not to have wholly reassured people in the central border region about avoiding a hard border. People still expected disruption from Brexit, were still wary of the information they received on the topic, and still felt uncertain about the future impact of Brexit on daily life in the border region.

The research behind this report was conducted in three phases: an online survey (May-June 2021), Focus Groups (June 2021), and Stakeholder Interviews (August-September 2021). The research was as similar as possible in design to that of the previous studies, but we were affected by the impact of the Covid-19 pandemic and so all our focus groups and interviews were conducted online this time.

The headline findings are that over half of respondents (53 per cent) say that the impact of Brexit has been worse or much worse than they had expected, with only 13 per cent saying it has been better than they feared. Most participants in the study report negative economic experiences of the impact of Brexit and the Protocol, with around half of respondents pointing to problems with the supply, delivery, delays in delivery, and general availability of goods. (We should note the context of the pandemic lockdown at the time of the survey too).

However, respondents express most concern for the societal impact of Brexit and the Protocol, on cross-border and cross-community relations. Many give examples of a ‘hardening of views’ on both sides, including among young people. Half of respondents say that the experience of the past 12 months has made them less optimistic about the future in light of Brexit, whilst those who see positives from Brexit tend to do so in terms of economic advantage (for both parts of the island of Ireland) or strengthening UK sovereignty.

As with our previous reports, we dedicate a section of the report to the comments and views of Leave-voting respondents, who are underrepresented in the sample. They convey a sense of disappointment, with many stating that what had been delivered, either politically or in purely economic terms, was not what they believed they had voted for. Leave-voting participants predominantly see the Protocol in negative terms. This is in clear contrast with the majority of respondents in the survey overall who see it in a positive light, such as offering ‘dual market accessibility’ and avoiding ‘a hard Brexit [and] hard border’.

In light of the Protocol and its intended purpose of avoiding a hard Irish border, it is striking that over half (57 per cent) of participants remain concerned that there could yet be a hard Irish land border in the future. This shows overall that there is a real sense of flux in the political, economic and social conditions in the border region since the end of the transition period – and no small sense of frustration either. This is felt on both sides of the border from people of different backgrounds, identities and viewpoints.

The border after Brexit remains a subject of much anxiety and uncertainty for those living closest to it.

You can access The Border After Brexit report here.

Katy Hayward is Professor of Political Sociology at Queen’s University Belfast and a Senior Fellow of the ESRC-funded UK in a Changing Europe initiative, working full-time on the topic of Brexit and Northern Ireland/the Irish border.