The recent airstrikes on Syria by the US were justified. But Trump’s policymaking is dangerously unpredictable says Dr Julie Norman 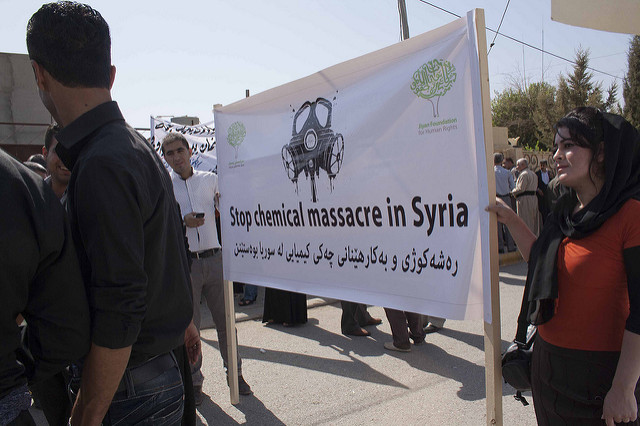 The US air strikes on Syria in response to the Assad regime’s chemical weapons attack on civilians last week were justified. But the lack of sound process and consistent policy surrounding them are grave causes of concern.

Why the air strikes were justified

It is natural and necessary to be critical of the US use of force, especially in the Middle East. But the air strikes were justified from moral, strategic, and legal perspectives.

From a moral perspective, the air strikes demonstrate that brutal chemical weapons attacks against civilians cannot be ignored. This is not the first time the Assad regime has used chemical weapons; the sarin attack in Ghouta resulted in over 1,400 deaths in 2013 and, under threat of US air strikes, led to the US and Russia-brokered disarmament deal.

The regime has also targeted its own civilians throughout the Syrian conflict through numerous other means, including sieges on rebel-held cities and nearly 13,000 barrel bombs in 2016 alone. There is a humanitarian imperative to constrain the regime and demonstrate that international norms regarding use of force still matter.

Strategically, while Friday’s relatively modest air strike will by no means paralyse the regime, even sending a symbolic message to Syria and its allies that chemical weapons attacks will not be tolerated is important. Such messaging is also useful for deterring future chemical attacks by other rogue states against their populations. Furthermore, the strike can give the US and its allies leverage in future negotiations with the Assad regime, which up until this point has had no real incentive to compromise.

Legally, from an international law perspective, UN Security Council Resolution 2118, passed in relation to the aforementioned 2013 chemical weapons disarmament deal, allows for use of force in the case of noncompliance in accordance with Chapter VII of the UN Charter.

In only targeting a remote military site directly linked to the chemical weapons attack, the strikes were also in line with International Humanitarian Law (IHL) mandates of proportionality.

Finally, the strikes can be justified by the Responsibility to Protect (R2P) framework, which, though distinct from international law, represents a global commitment to prevent and respond to war crimes committed by states against their own populations.

While all of these mechanisms are best served multilaterally, and ideally through the UN Security Council, UNSC action on Syria has been severely constrained by Russia’s veto.

At the national level, Trump’s decision to order the strikes without Congressional approval is legally murkier, due to the outdated nature of the Authorization for the Use of Military Force (AUMF), which has been used to justify most armed interventions since 2001.

Yet even without the AUMF, the loose parameters of the 1973 War Powers Act have allowed past presidents to side-step congressional authorisation when military action was limited in time and scope.

If the Trump administration were to consider additional strikes (which appears unlikely), it would be obligated under the War Powers Act to seek congressional approval within 60 to 90 days, but Friday’s strike itself was within the legal parameters used in the past by the executive branch.

Why we should worry

The worrisome factor is that Trump seemingly did not consider any of these rationales in his decision to order the strike. In contrast to Obama, whose attention to deliberative debate was readily criticised by Trump and others, Trump appears to have acted on impulse, without any clear process or coherent policy. This unpredictable and contradictory approach to foreign policy is dangerous in the context of Syria and beyond.

Trump’s decision to call the strikes seems to have been based on an emotional response to the ‘horrible’ pictures and footage of dying children in the aftermath of the chemical weapons attack. While the moral case for a response to such images is justified, as noted above, Trump has ignored the past atrocities committed by the regime in coordination with Russia.

As Ezra Klein asks in Vox, ‘If Trump is truly worried about the innocent babies, then much more needs to be done to protect them from bombs, from bullets, from fires, from starvation. Is he willing to do any of it?’

Likewise, Trump’s apparent moral outrage is in direct contrast to his refugee policy, which effectively prohibits Syrian refugees from coming to the United States.

Strategically as well, the air strike was such a contrast to Trump’s rhetoric on Syria to date, that it is difficult to see any clear policy agenda for moving forward from this point. The air strikes, while justified, are extremely risky in the absence of a long-term strategy. A coherent policy is necessary for guiding US actions on this conflict, and also for clearly signalling to allies in Europe and the Middle East whose policies on Syria are heavily dependent on the United States.’

Furthermore, Trump’s seeming willingness to use force in the absence of long-term strategy, and in direct contradiction to his previous approach, sets a potentially dangerous precedent. While the air strike may have made sense in this case, the US should be cautious of rashly engaging use of force.

Finally, while the air strikes were within domestic legal parameters, as noted above, further military action would most likely require congressional authorisation. The murkiness of the AUMF and the War Powers Act make this difficult to mandate, which is one reason why Obama’s decision to seek congressional authorisation in 2013 was criticised by some supporters who deemed it unnecessary.

Yet Obama was right to be cautious of overusing executive authority granted by the AUMF, and indeed, one of his aims in seeking a new AUMF in 2015 was to prevent hawkish successors from abusing it. Under Trump, in the case of Syria and other conflicts, the lack of legal limits on presidential use of force is potentially dangerous.

Under Obama, the emphasis on process and consensus on long-term strategies perhaps prevented necessary intervention in Syria, but it also prevented rash, unpredictable actions.

The air strikes last week may have been justified. But the context in which they were ordered by Trump, and the lack of clear process or policy around them, is deeply concerning for future strategy on Syria and US foreign policy more broadly.

Dr. Norman seems to have a degree of gullibility which is a poor indicator of her professional competence. There is absolutely no proof that the syrian government carried out the alleged attack. furthermore, there is no motive for such use of chemical weapons at this stage of the conflict. assad would have to be either very stupid or very mad to have done so, and there is no evidence that he is either. the only parties who gain from these accusations are the fundamentalists in syria and the us. “follow the money” (metaphorically) is a good guide in these affairs. ADDITIONALLY, her assertion that trump was justified – without there being such proof – seems pretty cavalier for an academic. i hope her future career doesn’t follow her present inclinations, if only for the sake of her credibility. (unless of course credibility with the us and uk governments is her only goal).