Dr Christopher Raymond looks at some recent polling trends in the US and the President's approval rating in light of the imminent midterm elections. 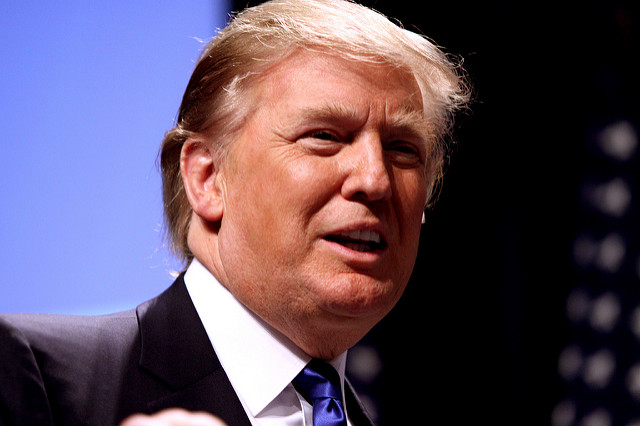 This 4th of July (the date American Independence was declared) serves as a good time to revisit some recent polling trends in the United States, as primary elections are underway to determine the parties’ candidates for the midterm elections in the autumn (in which all 435 members of the House of Representatives and one-third of senators are up for re-election).  With President Trump’s approval rating stuck below 50 percent, many have rightfully questioned whether the president’s poll numbers will drag down Republicans’ chances of retaining control of Congress—and perhaps jeopardise his own re-election chances in 2020.  While the headline polling figures suggest problems for Trump and the Republican Party, digging a bit deeper suggests it is far too early to count on a Democratic ‘blue wave’—let alone too early to project the winner of the 2020 presidential election. 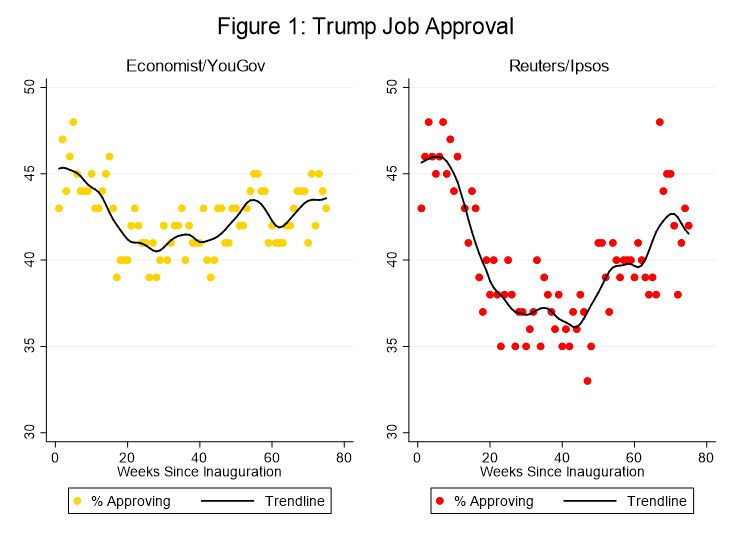 Figure 1 presents data measuring the public’s approval of Trump’s performance since inauguration in 2017 from two weekly polls: those conducted by the Economist/YouGov (examining the views of registered voters) and Reuters/Ipsos (examining all adults’ opinions).  Specifically, I present the percentage strongly/somewhat approving of his performance as president in each poll.  The Economist/YouGov data show that Trump’s approval remains down on the (modest) levels he enjoyed immediately after his inauguration, but that this percentage may be increasing towards 45 percent approval.  While the Reuters/Ipsos data suggest Trump experienced a much steeper drop in approval last summer and autumn than the decline observed in the Economist/YouGov data, a similar upward trend towards 40+ percent approval can be seen in these data as well. 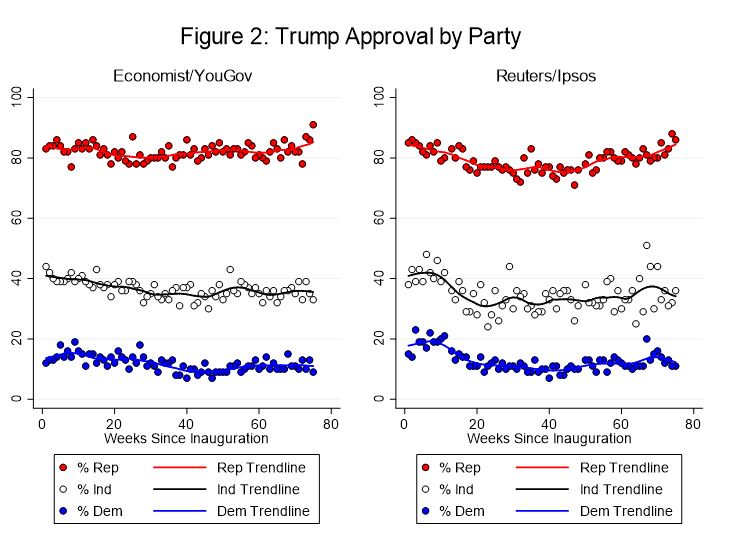 While Trump’s approval ratings remain quite low, it is surprising to learn that the American public today, on average, hold a more favourable view of Trump than they did on the eve of the 2016 election.  Using a measure from the Economist/YouGov polls asking respondents about their feelings towards Trump (which permits us to examine attitudes towards Trump prior to becoming president), Figure 3 presents the percentage of registered voters since June 2016 with a favourable/unfavourable view of Trump. 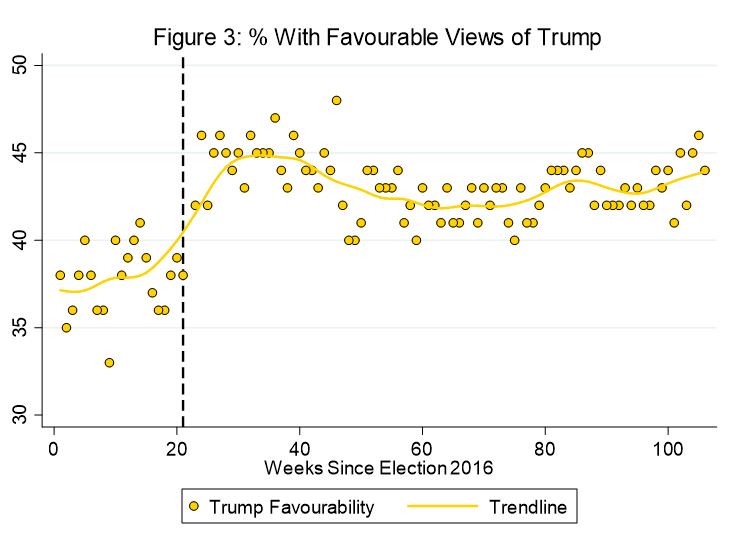 Prior to the election, only around 35 percent of registered voters held a favourable view of Trump.  This jumped to around 45 percent immediately after the election, fluctuating between 40 and 45 percent since then—and trending upwards in the most recent polls.  Although the percentage of registered voters holding a favourable opinion of Trump still remains less than a majority nearly 18 months into his presidency (despite a strong economy), the fact this percentage is greater than when he won the presidency means that Trump should not be counted out when looking towards 2020.  More immediately, the fact this percentage is greater than that seen on the same evening the Republicans retained control of both houses of Congress suggests the possibility that Trump’s continued low ratings may not be enough to doom the Republicans’ chances this November.

It is important to remember, however, that Trump’s increasing favourability is concentrated primarily among Republicans.  Among Independents, the pattern is considerably more volatile.  This can be seen in Figure 4, which presents the percentage of Independent respondents to the Economist/YouGov polls with a favourable/highly favourable opinion of Trump.  While the percentage of Independents holding a favourable opinion of Trump today is greater than at this point two years ago, this is down on even the modest favourability numbers Trump enjoyed on the eve of the 2016 election. 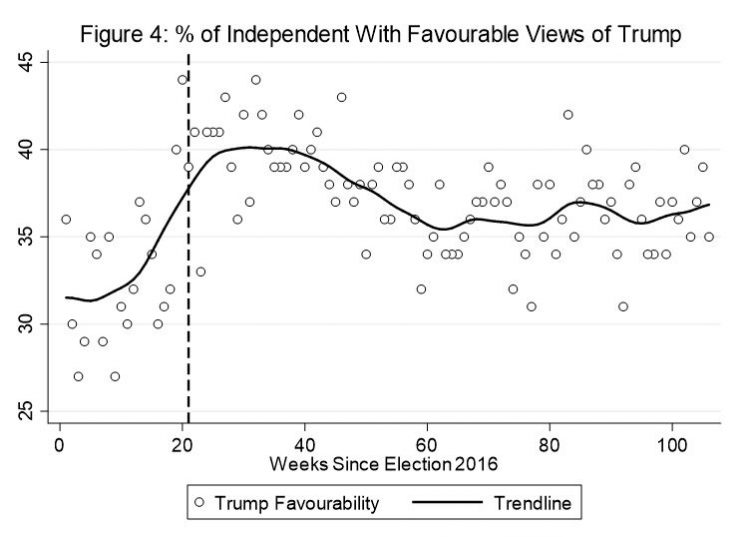 Looking Towards the Midterm Elections (and Beyond)

With the start of the primary election season leading up to the 2018 midterms, it is tempting to begin forecasting the results.  While many commentators have been forecasting a landslide election for the Democrats, the data presented above should temper such predictions.  Because Trump continues to enjoy enormous support among his base, and because midterm elections tend to be low-turnout affairs in which committed partisans are more likely to turn out than Independents, it is possible the 2018 midterms will not result in the blowout victory for the Democrats many had been predicting until earlier this year.  Keeping in mind Trump’s higher favourability ratings now than those seen on election night in 2016, it is far too early to begin speculating about 2020.