Dr Katy Hayward looks at some of the key points contained in this week's UK government paper on its commitments to Northern Ireland. 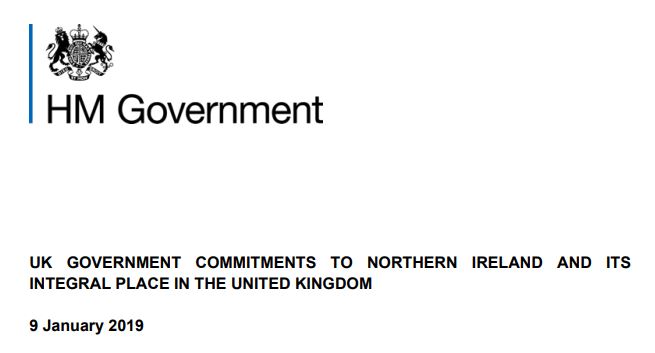 This week, the UK government published its unilateral commitments to Northern Ireland and its integral place in the United Kingdom. Despite its title, it would be wrong to read this purely as a push to get unionists on board the Withdrawal Agreement. It also contains some interesting pointers towards what needs to be considered when it comes to the democratic representation of Northern Ireland (NI) in the post-Brexit landscape of the UK. With that in mind, there are a few key points to bring out, both for Northern Ireland and UK-wide.

On the ones that are significant for Northern Ireland, the first is that the NI Assembly would debate and vote on whether the backstop should come into play by 1 July 2020. Then its view (assuming there will be one agreed ‘view’) will be fed into Westminster for the final decision. It is consultative and this just happens once. If there is no alternative at the end of an extended transition (i.e. December 2022 at the latest), the backstop kicks in anyway.

To turn to specifics:  the government here promises to ‘seek’ agreement from the Northern Ireland Assembly before applying new EU laws to Northern Ireland. If this wasn’t forthcoming, however, the UK would still be legally obliged to ensure NI compliance, which may mean increased controls on goods coming from GB into NI. So be wary of any references to Stormont having a ‘veto. The implementation of the Withdrawal Agreement (and, for that matter, Single Market) will not hinge on any decision of a few dozen MLAs.

Thirdly, the paper looks ahead to how Northern Ireland views are fed into the new UK-EU bodies established by the Withdrawal Agreement. For a start, the government commits ‘to agreeing a Memorandum of Understanding with a future Northern Ireland Executive setting out arrangements for the Executive’s role in respect of this. There is a lot more that could be done here, and plenty of space for ideas to come forward from NI itself with regard to these bodies.

An aside: the paper notes that the Union depends on the consent of the people of Northern Ireland. And thus that avoiding a hard border is essential, because (it is implied) to not to listen to people’s concerns about this will lead to a withering away of support for the Union. This is a new twist on the principle of consent – perhaps informed by the knowledge that the majority view in NI was of course for Remain. You can read more about this here.

And now for the points in this that are big for the UK as a whole. Devolution is back on the agenda; in fact a ‘new chapter for devolution in the UK’ is heralded. The Northern Ireland Assembly will have ‘significantly increased powers’, but there will also be boons for Scotland and Wales. (There are, as yet, no details on this either).

In the event that the Protocol comes into play, Northern Ireland will have to follow a limited number of EU laws to avoid a hard border. What this paper proposes is that, to avoid a harder ‘Irish sea border’, GB will not diverge either from these rules. This is a bold promise! In effect this means that the UK as a whole is committing to alignment with the EU as long as the Protocol is in play.

So we can only assume that this paper is not to bring the Brexit hardliners on board but is written with an eye to soft unionists both in Northern Ireland and Great Britain who are genuinely worried about the implications of GB/NI divergence. It really does show a commitment to the Union.

What are the chances of this being grabbed and run with by any political representatives here?

Mrs Mays record on making large and radical promises but not actually taking the slightest steps to put them into practice is long and comprehensive. Anyone in Ireland (or Scotland) who actually believes such stuff is probably in for a big disappointment.