The ethics and value of working with asylum seekers and refugees

Dr Fiona Murphy and Aylisha Hogan share their own personal experiences of working with Care4Calais in order to better the lives of refugees forced to live in the bleak conditions of a refugee camp. 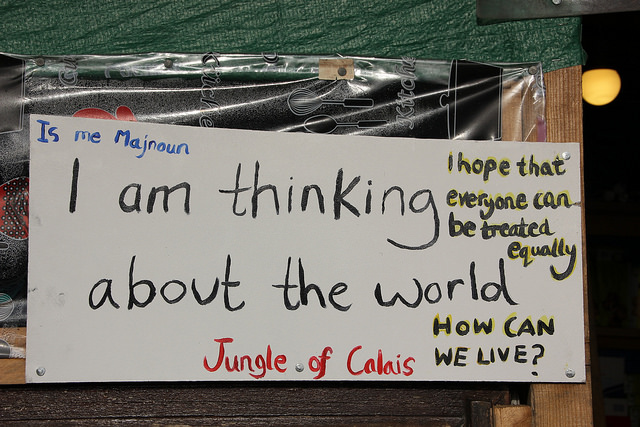 In the French novelist George Perec’s short novella An Attempt at Exhausting a Place in Paris, the abruptness and repetition of everyday life in Paris is described. The author sets out to describe a place in its totality – to the extent that it is exhausted, and chooses to do so in the beautiful Place Saint Sulpice in Paris. It is 1974, and Perec chooses to sit and observe everyday interactions in cafés, tobacco shops, and in the park next to Place Saint Sulpice. The result is an elegant, poetic book which offers up a detailed record of his observations in list form.

Indeed, both Perec’s methods and ensuing text might be mistaken for an anthropologist’s attempt to capture and project the everyday experience of Parisians passing through this beautiful square. The book resembles an anthropologist’s fieldwork diary with each section opening with the careful detailing of date, time, and location. Perec’s lists show us, ‘A little girl, flanked by her parents (or by her kidnappers) is weeping, A bus (Globus) three-quarters empty, A lady who has just bought an ugly candleholder goes by.’ In so doing, it charts the beauty of the mundane as well as the necessity of the ‘ordinary’ encounter.

But Perec’s observations take place in a time distant from the Paris, and indeed, France of 2017. What might he observe today if he were to sit in a Paris quartier or even dare to venture out to a Parisian suburb – or further to a French port caught in the complexities of being a frontier town? In some of those sites, Perec would not capture the ordinary or the mundane everyday but the extraordinary survival and endurance of human beings fleeing conflict ridden or fragile States.

He might witness, as we the authors of this piece (a research fellow and student from the Senator George J. Mitchell Institute for Global Peace, Security and Justice) have in our research on refugees in Calais, an Ethiopian marathon runner fleeing persecution being intimidated and arrested by a French police officer. He might join in conversation with a Kurdish man who saw all the members of his family being brutally murdered by ISIS. Perhaps he would see young children sleeping without shelter in cold Northern France, looking for saline drops to wash away the remnants of tear gas.

He would see people living in the most basic of conditions without access to clean running water and shelter. Perhaps he might even question whether this could really be France in 2017.

He certainly would admire the hard work of a multiplicity of NGOs and charities who strive on a daily basis to better the lives of refugees forced to live in such bleak conditions. He would without doubt remark on their resilience as human beings.

Such encounters form part of the everyday for those of us working on the topic of refugees, particularly in the context of camps and detention spaces. But the bigger questions here are how should our research and writing strive to improve the lives of refugees? What are the ethics of doing such work? While we can – as individuals conducting this research – volunteer, participate and engage at different levels indeed, all successful trajectories at a personal level, the value of our research to our research participants needs also to be accounted for.

One of the authors of this piece, Aylisha Hogan has dedicated much of her time to the development of Queen’s University Belfast STAR (Students Together with Asylum Seekers and Refugees), a grassroots student movement dedicated to advocating for the rights of all refugees, showing solidarity with them in their struggle for equality, locally and globally. The work STAR does focuses on educating students, the public and the local Queen’s community so that we can all better understand the issues facing refugees and asylum seekers both in Belfast and further afield. STAR also dedicates itself to advocating for the rights of this marginalised group and much of this advocacy work involves campaigning and direct action.

Over the past three years, STAR have campaigned in solidarity with people in Belfast on issues to do with housing, destitution, detention, racial profiling on cross-border bus routes, and equal access to higher education. The equal access campaign was a grassroots, student-led movement backed by the Students Union launched in recognition of the fact that those students labelled ‘asylum seekers’ were not able to access higher education as they were excluded from receiving student loans.

In the autumn of 2016, Queen’s announced they would make available two scholarships for students seeking asylum in Belfast. STAR will continue to lobby the university for more scholarships so that more of our fellow students can access higher education. STAR have also campaigned for safe legal routes for refugees fleeing violence and persecution and for the government to recognise the vulnerability of all refugees in Calais and across Europe but especially unaccompanied children.

The work Aylisha carries out with STAR is an important companion to her scholarly research work. The point is – very clearly – that we have a responsibility as scholars of migration to be engaged and active at a number of different levels when we take on this work. Both authors have spent time volunteering in Calais with the NGO Care4Calais, but for Aylisha’s PhD research, she is spending a sustained and engaged period of time with them – simultaneously being an active volunteer and conducting research which will be impactful at a different level.

Volunteering with Care4Calais allows one to experience first-hand the devastating conditions that refugees in Calais are being forced to live in. Since the closure of the Jungle in the autumn of last year, much of the work of NGOs in Calais has been the provision of basic means for survival; water, food and blankets. Patrolling the streets of Calais, providing food and water to refugees unable to access other aid is one of the main priorities of NGOs now. Care4Calais takes the day shift, another NGO, Utopia56, takes the night shift. In a place where resources are so stretched it is vital that NGOs work together like this.

In the absence of any washing facilities, Care4Calais also assumed the responsibility of providing access to basic hygiene in the form of ‘Jungle wash’. Volunteers take canisters of water with buckets, soap and towels to the main distribution site in Calais. Further, taking the generator with us always helped improve morale, it could charge over 100 phones at once, meaning people could keep in touch with friends and family. The significance of a phone call home, in the face of the daily abuse these people are facing, should not be underestimated.

Volunteering like this means the daily witnessing of exhausted, weary human beings who are kept awake by the riot police who routinely confiscate their sleeping bags and spray them with tear gas. On one occasion a man described to Aylisha how he had hidden some food whilst he went to find his friend, when he returned to eat it, it had been poisoned with tear gas. Without access to clean, running water, it was impossible for him to get the disgusting taste out of his mouth.

During the evenings, we would go out armed with warm drinks, unable to provide blankets it was some small comfort to the people sleeping rough on the streets. On one occasion, we came across a group of ‘bambinos’ who had been tear gassed by police officers whilst trying to hide themselves in the back of a lorry. Some of the boys also had old wounds on their faces, signs of a previous attack from the French riot police (CRS.) An older man appeared from his hiding place to help us wash their eyes with saline drops. Within less than five minutes the police appeared to disperse us, claiming that it is illegal to distribute after dark. We told them that we knew that was false but it didn’t matter, their presence was enough to scatter the young boys.

Another responsibility of the NGOs in Calais is ensuring that people get access to medical treatment, without means to pay, their only option is to go to the Le Pass clinic. On several occasions, we drove people there to be treated for general health problems, or injuries caused either by the police or sustained trying to climb into lorries to get across to the UK. One of the boys, who was just 16 years old, told us that while he slept in the hospital he dreamt of his mother who was still in Eritrea. All he wanted to do was return home to her but if he did, he told us, he would be thrown in prison.

This young Eritrean boy is one among many unaccompanied minors which policy and practice needs to better address. This is the focus of one of our projects.

It is just these kinds of intersections between scholarship, research, and active transformation that any of us working on the topic of migration should aspire to make.

Spending time in a refugee camp in Calais, on Lesbos, in a direct provision centre in Ireland, or a detention centre in London all reveal the complex array of techniques and measures utilised to manage, represent or regulate asylum seekers and refugees. It is key that our research and writing do not fuel the kind of representational violence that articulates asylum seekers and refugees as victims or recipients of Western benevolence and aid rather than active agents and the bearers of rights. As such, allowing political legitimacy and voice to our research participants is part of our ongoing responsibility in doing this work. Further, properly understanding and conveying the role of State violence in producing and reproducing ‘categories’ of asylum seekers and refugees in both countries of origin and receiving countries is key.

In short, engaged research with asylum seekers and refugees should make both a material and existential difference to their lives. It should be transformative and multilevel research in solidarity and collaboration with asylum seekers and refugees which strives to dialogue with shifting policy contexts in the EU and elsewhere. It should be public and aware – always in conversation with larger society, ready to engage with the ongoing political dynamics and shift to the right in the EU and beyond.   Indeed, such topics will be the focus of an event on the ethics of researching and working with refugees at the Mitchell Institute this September 2017.

Such anxieties about the moral imperative to act or indeed, the impact of our research also leads to bigger questions about the nature of knowledge production (and its reception) in the social sciences and humanities, particularly in the context of the neoliberal University where we find ourselves under ongoing critical scrutiny.

While Perec was content with his attempt to observe, capture and relay the mundanity of the everyday – in the context of research and writing with, and on the topic of, refugees – we must attempt to actively transform the conditions which we strive to understand. To do otherwise would be a failure of the ‘human-social understanding’  we so value in the humanities and social sciences.

The authors of this piece would like to thank the Senator George J. Mitchell Institute for Global Peace, Security, and Justice, the QUB Fellows Enabling Fund, and the NGO Care4Calais for facilitating various aspects of our research.